After the big bombshell and fallout from Laurel’s death over the past couple of episodes, Arrow re-focused back on the issues at hand, as Damien Darhk’s plot starts approaching its endgame. As the show prepares its final three episodes of Season Four over the coming weeks of May, the team stops to take stock of their position, and make sure that they are absolutely prepared to engage Darhk in the final battle for Star City, and the world. Now one hero short, the team needs to be more careful than ever, and face more terrifying demons than ever to boot.

This episode took a rather unexpected direction, in that it had Oliver willfully telling the team to split up and take some time away, despite the momentum of Darhk’s grand plot. “Genesis” benefited from this direction though, delivering an emotionally gripping episode that nicely spotlighted a lot of the separate struggles between the show’s surviving leads. The show didn’t even feature any flashbacks this week, which almost never happens on Arrow, and instead focused entirely on the higher buildup to the season’s climax. We do however get a couple of interesting hints that Diana ultimately came under the effects of Reiter’s idol in a bad way, possibly revealing that past Oliver could be losing her very soon.

Seeing as Darhk is an enemy powered by magic though, Oliver must figure out a way to counteract Darhk’s evil sorcery, and thankfully, he manages to get in touch with an off-screen Constantine for the first time in a while, who tells him to take a trip to Hub City to meet a fellow magic expert, Ersin Fortuna, a character that seems like she should exist in DC Comics lore, but doesn’t. Anyway, Ersin says that the trick to counteracting Darhk’s magic is to find the inner light in Oliver’s soul and wield it, but if Oliver’s inner darkness outmatches his inner light, then he’ll only fuel Darhk’s magic and make it stronger.

Surprisingly, or perhaps unsurprisingly, Fortuna finds that Oliver’s inner darkness is too great, and he can’t learn magic in that case. Wait, seriously? That’s it? That’s really disappointing, and doesn’t even seem to matter in the second half of the episode, when Oliver and Felicity somehow manage to race back to Star City in time to participate in Diggle’s plot, despite being all the way in Hub City. The whole timeline of events here was just very weird, and it feels like the idea of Oliver learning magic is a holdover from another aborted episode concept, which the writers just crowbarred into this episode as a means of giving Oliver an actual fighting chance against Darhk for the season’s climax. 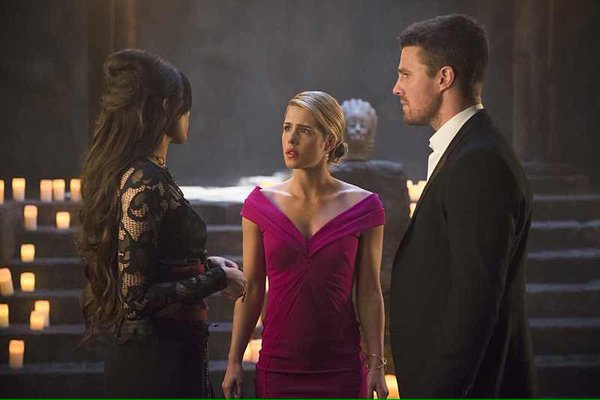 Fortunately, Diggle also gets a great chance to face his demons, and ironically, seems to plunge into an even thicker darkness than Oliver this week, nicely building on his grief and desire for vengeance from the previous episode. Diggle manages to corner Andy, with some help from Lyla, but goes against Lyla’s orders of standing down, and instead pursues Andy for a while… Which plants him right into a trap. After Andy pretends to capture Diggle, tortures him for a bit, then appears to let him get away, knowing that Diggle won’t ultimately have the spine to end his brother, Andy plants a tracker, which leads Darhk, Andy and several H.I.V.E. agents directly to Lyla’s mobile headquarters. Boy, that was kind of sloppy, though I suppose it’s understandable, given that Diggle is kind of falling apart in grief and rage since Laurel’s death.

What follows is a nicely exciting series of events, as both Oliver and Diggle have to do their best to protect Lyla and baby Sara, with Oliver even getting into another scrap with Darhk, and almost getting the life drained out of him again. Fortunately though, Oliver finds a way to channel his inner light and repel Darhk’s magic, which yet again has Darhk fleeing the scene, and Oliver narrowly surviving. Oliver reveals to Felicity later that this happened because he was thinking of his friends and the people who love him, which is kind of a cheesy trigger for Oliver’s light magic affinity, but hey, whatever. I suppose it works.

As you can imagine though, the real standout moments entirely came from Diggle, who manages to corner Andy a second time after Oliver’s intervention helps chase Andy off. Diggle pursues Andy until he can’t run any farther, and he’s yet again faced with the same choice. As Andy promises to keep coming after Lyla and Sara, Diggle finally relents to his darker desires and pulls the trigger of his gun, killing Andy at last. It’s a pretty heartbreaking turn, even if Andy was clearly beyond saving, and the pain in Diggle’s eyes is very noticeable. David Ramsey performed incredibly well in this scene, as he confesses to Oliver, and later Lyla, that he had no choice, and couldn’t compromise his family’s safety for anyone else anymore. No matter how necessary it is, killing someone so close to you can’t be easy, and the show demonstrated that very effectively here.

On the weaker end of storylines, Thea also got a chance to get away with Alex on vacation, which seems pretty benign at first, until Thea starts noticing that something is wrong. Nature noises are on a loop, daylight never disappears, and the neighbourhood that she’s in seems to be isolated to the point of being completely cut off from the rest of society. The reveal that Thea is actually with Alex in a protective biodome of sorts, underneath Star City, is interesting on paper, especially when Alex unknowingly gets suckered into the plan by taking H.I.V.E.’s mind-altering drugs, after they’re given to him by Ruve. The subplot sadly stumbles in the end though, since its conclusion is just too obvious. The show tips its hand early that something is very wrong with Thea’s vacation spot, and it’s not long before viewers will be several steps ahead of the episode’s progression, which makes the dramatic reveal of Thea being trapped and cut off from Team Arrow ultimately feel like a shrug when it should be a big shock.

Still, “Genesis” was a pretty sharp episode of Arrow overall, and made for a nice way to have the show regrouping and positioning its characters ideally for the season’s final trio of episodes, without being too transparent about it. The complementary struggles of Oliver and Diggle were realized very well, and while Thea’s subplot was ultimately too predictable, this episode still managed to effectively balance thrills and drama, especially when Diggle is forced to finally put his brother down for good. With Darhk’s world-destroying plans seemingly revealed, and Team Arrow now being down yet another member, now that Thea is imprisoned in one of the Genesis Arks, our heroes are yet again at a big disadvantage. With Oliver managing to find some semblance of inner light though, perhaps they’ll have some degree of a fighting chance now, and hopefully they figure that out before it’s too late!

Arrow 4.20: "Genesis" Review
Arrow effectively balanced emotions and thrills this week, as the show takes a breather to position everyone for the season's climax, now that Darhk's endgame is fully coming to light.
THE GOOD STUFF
THE NOT-SO-GOOD STUFF
2016-05-05
86%Overall Score
Reader Rating: (0 Votes)
0%