Agents of S.H.I.E.L.D. is gearing up for its season finale now, but it looks like Season Three has at least one week left to charge up before its large-scale, surely destructive conclusion fully begins to unfold. “Failed Experiments” had a handful of appealing highlight moments, but most of the episode sadly dragged. It wasn’t until the climax that things felt like they hit a good stride, with most of the early material feeling like filler, and that’s rather unfortunate.

Yet again, Coulson’s crew is deliberating ways to bring Daisy back into the fold, with Mack especially desperate to find a solution when it comes to reclaiming his former partner. Lincoln is also growing quite restless, particularly after Coulson grounds him on the base, but when Fitz and Simmons struggle with a potential cure for Hive’s parasites, and come up with a prototype, Lincoln decides to take matters into his own hands and inject himself with the potential cure, regardless of the consequences.

While this is going on, Hive assembles a few runaway HYDRA leaders (I told you that they’ll never be completely purged from the Marvel Cinematic Universe), and forcibly subjects them to an experiment necessary for his final endgame; To turn the world’s human population into Inhumans, and create a new world order. It’s a much softer kind of world domination, and one that possibly calls back to Magneto’s motivations in 20th Century Fox’s original X-Men movie from 2000, when he wished to turn the world leaders, and possibly all of humanity, into mutants. I’m not sure if the similarity is intentional, but when the experiment inevitably goes awry, the HYDRA leaders melt into a liquid mass of goop, in a more gruesome variation of how Senator Kelly met his end when subjected to Magneto’s botched mutation ray in that movie. Maybe I’m reading too much into it, but it’s not a bad thing if Marvel wants to make nods to Fox’s X-Men movies in the MCU with the Inhumans, since it benefits everyone if Marvel and Fox are able to work together in the betterment of Marvel media.

Speaking of movie tie-ins, I was also quite surprised to see that there was no tie-in to this week’s Marvel movie release of Captain America: Civil War in this episode, unlike last year’s previous season of Agents of S.H.I.E.L.D., which was quickly crowbarring in more than one story tie-in to the then-imminent big screen Marvel release of Avengers: Age of Ultron in its final few episodes. There’s kind of a nod to Marvel’s latest blockbuster, when Hive makes a throwaway mention of how power is set up so that only billionaires can build iron suits and only the military can make super-soldiers, which will inevitably lead to a war all its own, but that’s all the references we get to the imminent events of Captain America: Civil War in the MCU at this point. Perhaps Marvel is trying to exercise a renewed restraint for not feeling the need to constantly bring up what’s going on in the MCU movies during Agents of S.H.I.E.L.D., though I can also see the fallout of Captain America: Civil War influencing next week’s episode just as easily.

In any case, the first half of the episode largely drags its feet. After Hive’s experiment is a failure, since it needs pure Kree blood, Coulson puts together an op to take out Hive in a surgical strike, while Lincoln ends up incapacitated because he took an unfinished cure. Adding insult to injury is the fact that we find out later that the cure Lincoln took didn’t work, and not only that, it shut down his immune system, placing him into strict quarantine. I guess the show needed to bench Lincoln to raise the stakes for the fully human members of S.H.I.E.L.D., which makes them less capable of fighting back against Hive’s forces, but still, that really sucks for him, since he ironically got himself even more grounded in the fight to stop Hive and reclaim Daisy, since he now can’t even leave a cell, or else he’ll probably die, due to his deactivated immune system.

After May messes around with Hellfire for a bit, and Coulson rallies some mercenaries to join the cause, Hive summons two Kree Reapers, hunters designed to trap and experiment on humans, which are in fact the very same Reapers that captured and rebuilt Hive, back when he was a primal Indigenous hunter in prehistoric times. This is where the episode thankfully starts to get more interesting, as Mack goes off-mission to directly try and get Daisy back, while May and the mercs watch Hive take on one of the Kree thugs, hoping that the thing may do the job of killing Hive for them. 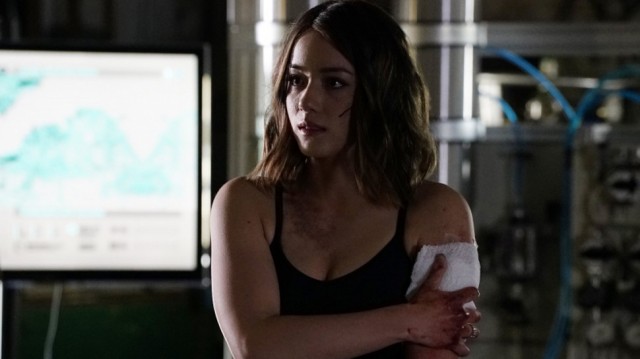 This certainly has the episode winding down on a very tense and dramatic note, as Mack fails to get through to Daisy, after she kills one of the Kree successfully, and prepares to drain its blood for Hive’s experiment. Mack disintegrates the Kree corpse with one of those handy little Diviner discs that S.H.I.E.L.D. still has lying around, which leads to Daisy laying a giant-sized beatdown on him, and nearly killing him. At the same time, Hive finally uses his parasitic powers to kill the other Kree (why didn’t he just do that from the start?), leading to May and the mercs taking shots at him, and predictably failing to kill him. With the mission an utter failure, everyone has to beat a retreat, and Daisy decides to volunteer to be drained in place of the Kree bodies, since she has Kree blood in her system, from when she was shot by Ian Quinn during Season One. I have to admit, that was a cool way to bring an old story element from the early days of the series back into play, though since Hive needs pure, living Kree blood, I’m not sure how this can fly, since it’s clearly been mixed with human and Inhuman DNA, and probably created an even bigger genetic mess than the sample that Hive used from Ward’s dead body in the previous failed attempt. I guess we’ll have to see how this pans out.

Considering that Agents of S.H.I.E.L.D. has been doing such an excellent job lately, it’s a bit disappointing to have a slower, slightly less satisfying episode for the most part, though the exciting and emotional climax helped to make up for that. Coulson’s team is more vulnerable and desperate than ever now, and now that their sole remaining Inhuman is fully out of commission, they’re really up a creek. There’s obviously a lot of questions about whether Daisy will be a viable alternative to an actual Kree specimen in terms of the grand Inhuman experiment, but one thing that can’t be questioned, is that if she’s willing to give her very life for Hive’s wishes, then I suppose she is well and truly lost.