The Flash delivered several hefty dramatic punches this week, as emotions ran high with the coming of Zoom, and Barry still being powerless, after sacrificing his speed. Despite S.T.A.R. Labs finding a temporary workaround in a Flash hologram that speeds around Central City and seemingly tricks criminals into tripping themselves up for the CCPD, the threat of Zoom and other metahumans is still ever present, and Barry and co. are running out of time to find a solution.

As fun and light-hearted as The Flash can often be, when it really wants to grab at your heartstrings, it does so surprisingly powerfully! “Rupture” proved that to outstanding effect this week, being another especially strong episode that really highlighted Barry’s bond with his allies, and what exactly The Flash means to Central City and its protection. As much as this was a big episode for Barry however, it was also a big episode for Cisco, who once again must confront the fact that he’s not close with his brother, after Dante’s Earth-Two doppelganger, a metahuman called Rupture, comes to Earth-One, seeking Cisco’s head for the death of Reverb during the gang’s trip to Earth-Two!

Surprisingly, the subplot with Cisco didn’t negatively affect the equally great material with Barry, as Cisco continues to fail to get through to his smug, condescending brother. After Cisco vibes Dante, and believes that Dante could be in danger, he’s almost dismayed to see that Dante is just fine, and as dismissive as ever. Dante’s in for quite a shock though, after his Earth-Two doppelganger shows up, effectively throwing Cisco’s brother’s world for a loop, and giving him a very sudden taste of what Cisco deals with on any given week in Central City!

This provided a standout emotional moment for Cisco, as he confides in his brother about his metahuman abilities, and why he called Dante after so much time. This nicely capitalized on the fact that we haven’t really seen Dante since Season One, and when we see Rupture meet the same unfortunate fate as Reverb later in the episode, when Zoom is just as dissatisfied with his performance in stopping the heroes, it actually affects Cisco pretty noticeably. He runs to his brother and embraces him afterward, saying that he wants things to change, and he wants to work at being closer to his brother, whatever it takes. Even knowing that it’s a doppelganger, it has to be very emotionally affecting to see the doppelganger of someone close to you on Earth-One die. Cisco witnessing a taste of losing his brother made for a great emotional device, especially after Barry was also understandably affected by watching the Earth-Two version of Detective West die back during that big Earth-Two two-parter.

Even with this week’s metahuman having a close connection to Cisco however, Barry still got put through the emotional ringer as well, after he’s seemingly backed into a corner with the Zoom situation. It seems like there’s no other choice but to restore Barry’s abilities, but Barry is still apprehensive, especially given the obvious safety concerns of recreating the freak accident that turned him into The Flash all the way back during the character’s debut in Arrow’s second season. He tries to smooth the situation out by calling his father back to Central City to help him decide, but when Henry is adamantly against Barry attempting to re-create the Particle Accelerator accident, that only makes things worse.

The device of Barry having to decide which of his three father figures to follow was excellent, especially when they all have seemingly extreme opinions. Henry is unflinchingly against the experimental idea to restore Barry’s powers, while Wells aggressively pushes in favour of it, seeing no other way to stop Zoom and protect Central City. Detective West, meanwhile, abstains from an opinion, and simply admits that he doesn’t know what the right call is. It highlights how necessary each man’s perspective is, and how each contributes something special to Barry’s betterment as a person, even if it unfortunately all leads to a bunch of canceling out in terms of what to do next in this moment. Henry grounds Barry, while Wells motivates him, and West keeps him honest. It’s very emotionally inspired, and this interplay between fathers was one of the best elements of an already standout episode for this show!

After Zoom starts threatening the CCPD however, Barry’s hand is especially forced, though he initially tries to fix the situation with Zoom and Rupture by not relying on his former abilities. This leads to another superb scene with Zoom, as he is barely talked out of killing the cops in the precinct proper by Caitlin, who stays captive there, but when Caitlin gets a message to S.T.A.R. Labs, about Rupture attacking the cop’s new stronghold at C.C. Jitters, Zoom kills the cops anyway, along with a news crew and Rupture, and lets all of Central City see, declaring that the city is his, and now everyone has to fall in line. This was fantastic, and made Zoom a menacing and terrifying villain all over again, one that seemingly can’t be stopped, even if Barry were to get his powers back!

And there lies the only slight weak spot in this superb episode; Some of the debates are deflated by the obvious knowledge that Barry will eventually regain his abilities. There wouldn’t be a show if he didn’t. Even as big emotional bombshells are dropped, namely as Iris finally tells Barry that she has fallen in love with him, abilities or no, and she wants him to be there because of that, some of it doesn’t hit with the full impact. The show will find a way to restore the status quo, though I do have every bit of confidence that the journey back to it will certainly be very interesting and exciting!

I also have to give the episode props for having an enormous curveball of an ending to boot! After Barry finally agrees to replicate the night that turned him into The Flash, with Wells and Cisco taking care of the arrangements, things go awry, and Barry is seemingly disintegrated and killed, turned into an energy wave that zaps a fleeing Wally and Jesse, who flee some protective confinement in Eobard Thawne’s hidden room after Detective West tries to stash them there. This seems to officially be the point that Wally and Jesse gain their own super-speed abilities from DC Comics lore, and hopefully, two more allies will help give Barry a fighting chance against Zoom and his growing army of metahuman thugs… At least, when Barry gets pulled back into the dimension that he’s supposed to be in. Again, Barry obviously isn’t truly ‘dead’, and if you look at next week’s promo (the episode directed by cult hit filmmaker, Kevin Smith, in fact!), you’ll see that he is still alive and kicking, just lost somewhere that he shouldn’t be. Again, The CW wouldn’t have a show without Grant Gustin, so the fact that Barry somehow survived being nuked into energy should be a given. Because DC. 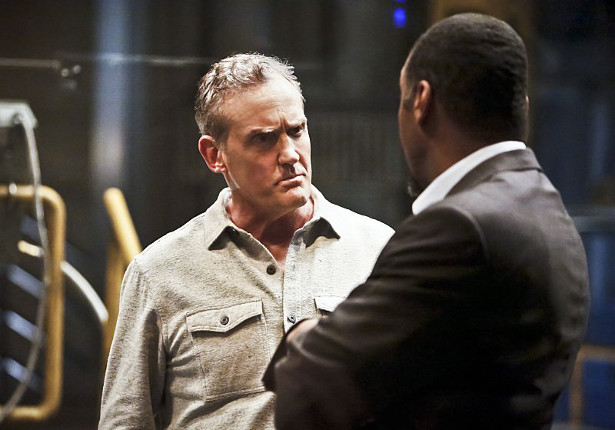 Despite the fact that we no doubt know that Barry will eventually make his way back to his own dimension, powers intact sooner or later, “Rupture” was still a fantastic offering this week, and one that once again proved that this show is capable of outstanding emotional punch during the right moments. All of the drama throughout this episode was great, and the growing menace of Zoom was also demonstrated incredibly well, with Central City being entirely defenseless at this point, even with Wally and Jesse possibly getting their own chance to join Team Flash in a big way. Like I said though, even when we can guess how things end, The Flash never fails to take us on a riveting and cool journey in the process. Barry’s return to reality should hopefully be just that next week!

The Flash 2.20: "Rupture" Review
The Flash went right for the heartstrings in a dramatically powerful episode that forced Barry and Cisco to confront their insecurities, as Central City lies more defenseless than ever!
THE GOOD STUFF
THE NOT-SO-GOOD STUFF
2016-05-04
90%Overall Score
Reader Rating: (0 Votes)
0%