NOTE: Spoilers from throughout the first season of “Lucifer” are present in this review

When Lucifer first began at the end of this past January, the show really wasn’t anything special for the most part. It felt like yet another tired, half-baked crime procedural, the kind that primetime television is already outrageously clogged with, but it had one major hook that was going for it; Its lead character, who just so happened to be The Devil, was excellent. Perhaps that’s also how FOX’s other big new procedural from this season, the mostly-panned, but warmly-rated Rosewood skirted by itself. The good news with Lucifer however is that it became a lot better as the season went on, and with the conclusion of the first season, it now stands as one of FOX’s most fun and interesting popcorn shows, despite its rough first handful of episodes.

Lucifer is adapted from the graphic novel series of the same name from Vertigo/DC Comics, which is itself a spin-off of another highly celebrated Vertigo/DC graphic novel, Sandman by Neil Gaiman. You wouldn’t necessarily know this from looking at the television adaptation however, since, despite Lucifer still having that same sense of grand, abstract drama and quirky humour that characterizes most comic book shows, it has very little to do with its graphic novel inspiration. Beyond the identity of its lead character, Lucifer Morningstar, his main minion being Mazikeen, nicknamed, “Maze”, and the fact that he runs a nightclub in Los Angeles called Lux that has a piano in it for some reason, sharing the name of the piano bar that Lucifer runs in the source comics, the show is completely different from the graphic novel. Hell, Lucifer doesn’t even look the same in the television adaptation, with his distinct blond hair and boyish charm from the source comics now being replaced with a more ruggedly handsome, dark-haired look in the television adaptation. 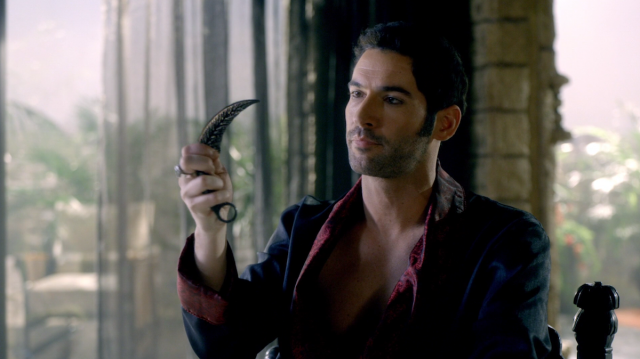 Despite the show being extremely loosely adapted from its source however, much like The CW’s competing Vertigo/DC inspired procedural series, iZombie, Lucifer is quite fun, and manages to carve out its own interesting direction by the end of its first season. Sure, the show is still trailing the quality of the source comics, but given how well it found some footing in Season One, perhaps the series can keep getting better in its confirmed second season, once that starts later this year.

The biggest reason why the show works however, so long as you’re willing to not incessantly compare it to the source comics, is lead star, Tom Ellis, who plays Lucifer with great, delightful relish. Lucifer Morningstar is a very devil-may-care character, so to speak, taking pretty much nothing seriously, proudly taking in every conceivable pleasure on Earth, and often having a child-like selfish innocence that has him exploiting his tendency to nose into LAPD business in order to further his own need for personal answers. This often leads to the frequent exasperation of his LAPD partner, Chloe Decker, played by Lauren German, who is often forced to take the brunt of Lucifer’s childishness, and inexplicably causes the otherwise immortal Devil to be susceptible to injury, and the reasons for that are still a mystery by Season One’s conclusion. While the two characters have a rough start, they become a more entertaining pair later in the season, once the show starts finding its character groove a bit more.

Another big strength of Lucifer in its first season is how effectively it derives humour from what’s otherwise seen as heavy philosophical debates and seemingly arbitrary moral constraints. There’s a heartfelt, unapologetic honesty to Lucifer that makes him strangely compelling, despite the fact that he’s The Devil in this universe, since he’s played both as a lost man with nothing to lose, and as a comical realist that effectively pokes fun at humanity’s idiosyncrasies. It’s a real challenge to make The Devil out to be likable, but Lucifer succeeds, especially when the later reaches of Season One explore a surprising pain and vulnerability behind his character, who never asked for his station as ruler of Hell, and, contrary to popular belief, doesn’t actually enjoy others being hurt or killed, especially not in his name.

It’s too bad that the supporting cast can’t quite keep up with Ellis and his magnetic lead character, but they have enough strong moments to make them a satisfactory selection of characters in Season One. Maze, played by Lesley-Ann Brandt, is a steadfast sidekick with her own agenda, and her evolution as a character nicely mirrors Lucifer’s, since she approaches Earth from the other direction, having no intention of staying, and not caring much for what people do or think. Likewise, Lucifer’s angelic brother, Amenadiel, played by D.B. Woodside, who is sent by God to order Lucifer back to his station in Hell, is a solid rival and occasional begrudging ally to Lucifer, and is often responsible for the season’s better plots, which almost always deal with Lucifer’s supernatural implications and debates. Even with barely anything to do with the storylines in the Sandman and Lucifer graphic novels, and not having the same small connecting thread to the mainstream DC Universe that was present in those comics, Lucifer’s supernatural elements feel smart and often surprising, and the promise of a greater focus on supernatural storytelling in Season Two is definitely a great one! 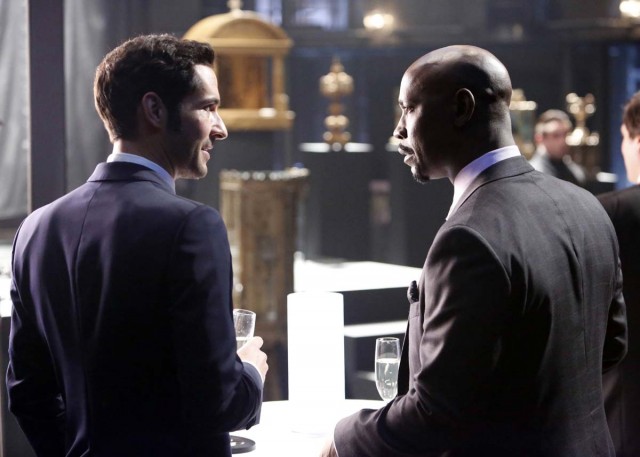 The show’s human element, especially on the procedural side, is a lot more weak and uneven though. While Lucifer’s sex-starved therapist, Linda Martin, played by Rachael Harris, can be a pretty funny character, as can Scarlett Estevez’s young daughter to Chloe, Trixie, who adores the child-despising Lucifer, the other human characters unfortunately fail to make almost any kind of impression. Chloe’s ex-husband, Dan Espinoza, played by Kevin Alejandro, referred to as, “Detective Douche” by Lucifer, largely just exists to stir up trouble for Lucifer or Chloe, and while the show attempts something of an earthbound villain in resurrected corrupt cop, Malcolm Graham, played by Kevin Rankin, it’s never as interesting as Lucifer’s existential crises. The show’s procedural-style cases do get better as the season goes on, but the first half of the season’s cases are very weak, being too often predictable and unsatisfying, and the weaker human characters can often be to blame for that. Maybe Season Two will deliver higher-quality cases, but considering how many clever cases-of-the-week that iZombie has pulled off, on The CW no less, it’s sort of baffling that Lucifer struggles a lot more in this department, at least during its first season.

In the end though, Lucifer manages to be a pretty good show by the end of the first season, even if it still has room to improve in Season Two. It’s certainly not the best primetime comic book show on the air at this point, but after it shakes off some of its rough edges from the first handful of episodes, the show starts becoming very entertaining. Even in the initial weaker episodes, lead character, Lucifer Morningstar is also a constant delight, in spite of the fact that he’s The Devil, and largely carries the appeal of the show on his own shoulders, which is perhaps fitting. Fans of the Sandman or Lucifer comics will probably find this show to be an unwelcome bastardization of the source material, though since Lucifer is barely connected to its Vertigo/DC inspirations anyway, perhaps that’s forgivable. Either way, the show demands some patience in the front half of the season, but the back half will make your tuning in well worth it, especially when you’ll find yourself falling so hard for this show’s lead character, against your better judgment.

Lucifer: Season One Review
Lucifer takes several episodes to properly find its footing in Season One, but once it does, it becomes an inspired blend of supernatural drama and procedural comedy, even if largely due to its irresistible lead character.
THE GOOD STUFF
THE NOT-SO-GOOD STUFF
2016-05-03
77%Overall Score
Reader Rating: (3 Votes)
98%