After being officially unveiled with a pre-rendered CG trailer during Bethesda’s E3 press conference last year, the publisher has gone ahead and set a release date for the game today, despite this year’s E3 still being just over a month away. Dishonored 2 will arrive on November 11th of this year, for PC, PlayStation 4 and Xbox One. 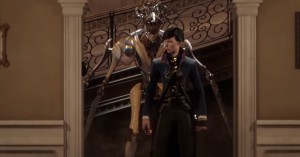 Bethesda has also promised that the game’s first public gameplay demonstration will occur during their E3 press conference on June 12th. So far, what we know is that the game takes place fifteen years after the original Dishonored, and features two playable characters, returning protagonist, Corvo Attano, and his pupil and charge, Emily Kaldwin, who each possess unique abilities, once again giving players the choice of violently cutting through foes, or sneaking around completely undetected. As with the original game, Dishonored 2 will also be single-player-only.

Developed by Bethesda/Zenimax subsidiary, Arkane Studios, the original Dishonored released in 2012, for PC, Xbox 360 and PlayStation 3,  and went on to be one of the year’s biggest hits in gaming, as well as one of the most beloved new IP’s of the previous hardware generation, being widely praised by both critics and the community for its open-ended gameplay, unique style and vast array of potential abilities for lead character, Corvo to make use of. Dishonored was later re-released for PlayStation 4 and Xbox One in 2015, as Dishonored: Definitive Edition, receiving a graphical boost to native 1080p resolution on both platforms, and coming packaged with all of the DLC expansions that were made for the original last-gen release of Dishonored, free of charge.