After the debut of Azrael last week, Gotham got pretty exciting, giving the titular city its first taste of a Batman-esque figure, while also cleverly tying Theo Galavan into a deeper connection with DC Comics lore, by having Hugo Strange resurrect and re-purpose him as Azrael. Following on from that plotline, “Unleashed” brings the Azrael arc to a violent conclusion this week, though doesn’t quite recapture the same thrills as last week, instead having the show bumble around in circles as it scrambles to resolve any lingering plot threads before the season finale in a couple of weeks.

Unfortunately, this means another tired invasion of Wayne Manor for a climax, especially after the show forces an excuse to have Bruce separated from Alfred again. This in turn is also necessary to get Bruce to tip off Selina about what’s going on at Arkham Asylum, since he needs help breaking in. So much for Bruce permanently removing Selina from his life. I knew he would never stick to that, and anyone else with half a brain would have put that together as well. Anyway, Selina rightly points out that Bruce can’t break into Arkham, since his presence would spook Strange into closing up shop and moving to another hidden location. Since Selina is a nosy street urchin though, Arkham would probably just toss her out if she’s caught, making her the better option to sneak in alone, especially considering her highly increased skills at thievery, stealth and espionage.

Unfortunately, Selina sneaking off to Arkham is soon after complemented by the show crowbarring Galavan/Azrael back toward Bruce Wayne, after Gordon and Bullock decide that their best chance of locating Azrael is to talk to Tabitha, who is attempting to run away from a lovestruck Butch. Penguin also prepares an assault of his own, after seeing that Galavan lives on the television during the previous episode, though that doesn’t come into play until later on. Anyway, Tabitha takes Gordon and Bullock to enter the Dumas family crypt and find the real sacred sword that Azrael claims to wield, and Galavan shows up on cue, before Tabitha attempts to get him to remember who he was… Which leads to Galavan running Tabitha through with the sword, and going off to kill Bruce Wayne, having now remembered his sacred mission.

Yes, it’s a bona fide eye-rolling moment when the show so transparently sends Galavan after Bruce again, even under the guise of Azrael, but making matters worse is that Tabitha somehow survives being impaled on a sword (even for this show, that’s pretty unrealistic!), then ending up comatose at Gotham General. This provides an excuse for Penguin to reunite with Butch, and promise him revenge against the resurrected Galavan, under the condition that Penguin will permanently leave the two lovebirds alone afterward. Again, just like when Bruce claimed to be cutting Selina out of his life, I really doubt that the show will stick to this, but at least this temporary truce leads to a fairly awesome moment later. 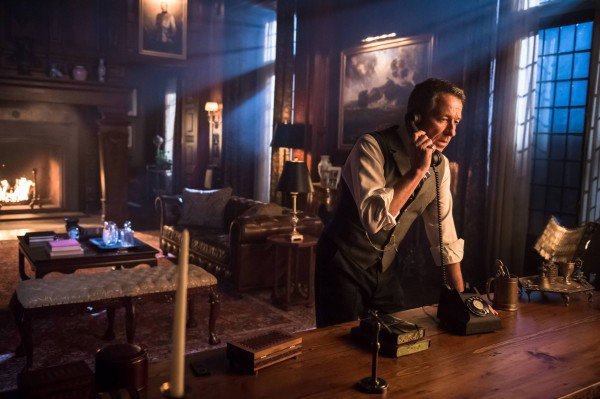 After Gordon tells Alfred that Bruce is in big trouble, Bruce conveniently shows up at Wayne Manor again right at that very moment, which is pretty contrived, and thus, the stage is set for Azrael to show up, and Alfred to just barely hold him off before being pushed out of a window, seemingly dead, though obviously, viewers would know better. Bruce then has to flee, before running over Azrael with a car, before Gordon shoots Azrael several times, and Alfred returns, perfectly fine. Even that is not enough to kill Azrael though, somehow, and right as the three appear to be screwed, Penguin arrogantly shows up, with Butch, who is carrying a bazooka, and they simply blow Azrael to kingdom come, before Penguin cheekily tells Gordon, “You’re welcome.” As much as the final moments of the Galavan/Azrael arc were pretty laboured and tedious, it was actually kind of worth it for this moment, which was equally ridiculous and awesome. Strange definitely won’t be piecing Galavan back together from that, so it looks like he’s finally dead for good, even though Batman/DC fans would be aware that the mantle of Azrael will eventually find its way to someone else when Batman starts patrolling Gotham City in the future.

Fortunately, the subplot with Selina in Arkham went a little better than the Azrael conclusion, as Selina sneaks around the asylum, even bumping into Nygma at one point, who is attempting to flee, after witnessing Strange’s twisted experiments in the basement. Selina tells Nygma the way out, and it appears that he’s home free for a bit, until guards surround him, and he’s quickly captured again. That’s pretty annoying. I guess that the show isn’t quite ready to separate Nygma from Arkham, even if it did just fess up to the fact that someone like Nygma would quite simply want to get the hell out of dodge after seeing just what’s going on in the Indian Hill level of Arkham. Still, why bother to have Nygma put together an escape plan so quickly, if he’s just going to be recaptured immediately after getting out? 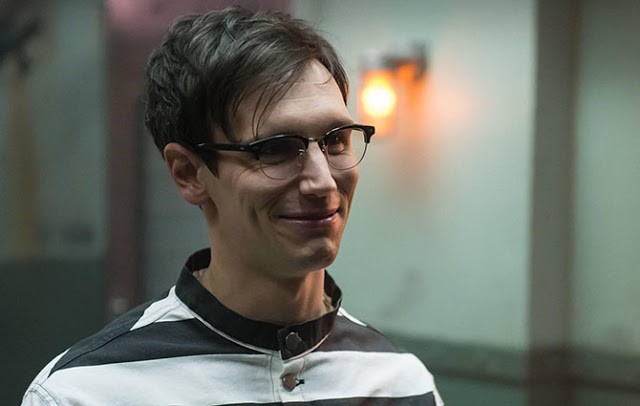 The episode’s ending is also pretty good though, as Selina eventually finds Bridget Pike, her key reason for agreeing to help Bruce, and says that it’s time for them to go. Sure enough though, Strange’s brainwashing has gotten to Bridget as well, who now only refers to herself as, “Firefly”, and prepares to light up Selina as the episode ends, with Strange and Ms. Peabody looking on, seemingly fully aware that Selina snuck into the place. At least this is a far better turn for Strange this week, who cleverly evaded Gordon and the GCPD poking around at the start of the episode by taking advantage of their flimsy warrant to search his office (where he conveniently shredded every incriminating document), and then prepared this exciting cliffhanger ending, not even phased at Selina sticking her nose into his business. This guy truly is the arch-villain that Gotham deserves at this point, and it’s great to see him once again at the top of his game this week!

Still, there’s no denying that, “Unleashed” is a bit of a weaker episode for Gotham, and feels a bit like a filler episode that is saddled with laying the rest of the groundwork for the end of the season. The episode’s final moments made up for the more tedious bulk of it, but the way that the Azrael arc ended, beyond his awesome demise, was pretty damn clumsy. It’s good that Firefly is coming back in a big way, since she’s also one of this season’s better villains, alongside Hugo Strange, but it sadly felt like most of the episode just wasted time, especially when Nygma escapes Arkham, only to be recaptured, and Tabitha gets stabbed, only to survive. The show doesn’t seem to have the spine to kill Tabitha or Captain Barnes at this point, even though both should be dead, but I suppose that they’re probably still needed in Season Three, and taking them out of play once again leaves Gordon’s path to Hugo Strange pretty clear.