Ricky Gervais may be synonymous for his biting wit in the original U.K. version of beloved sitcom, The Office, but since then, Gervais has had trouble recreating the appeal of his most famous character, David Brent. Gervais has made attempts to once again create and star in projects for both television and film since The Office, with another notable, albeit panned wide release effort he spearheaded on the big screen being 2009 comedy, The Invention of Lying.

This time however, Gervais isn’t even making it to the big screen, with his latest effort, Special Correspondents, a remake of the French 2009 movie, Envoyes Tres Speciaux (which more or less translates directly to the same title in English), instead releasing exclusively on Netflix. Gervais is starring in the movie alongside Eric Bana, with Gervais also writing and directing the project, along with naturally producing it. 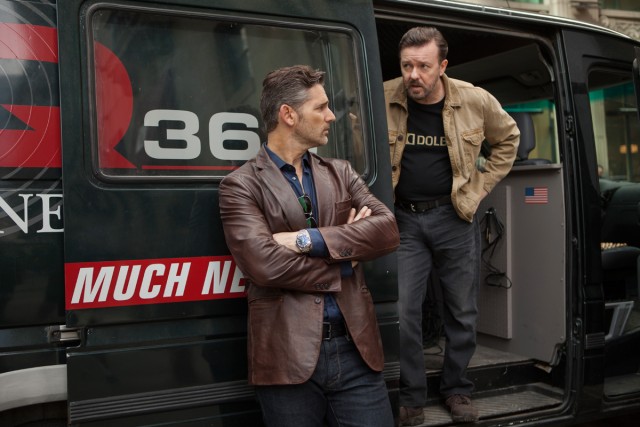 Unfortunately, this leads to a lot of the same issues that plagued The Invention of Lying in 2009, namely that Special Correspondents is ultimately a very milquetoast movie, the best part of which is definitely its premise. It’s not unfunny, and everything is mostly acceptable, though it’s also very forgettable. Despite the best efforts of the cast and crew, especially Gervais himself, Special Correspondents ultimately fails to stand out. It’s marginally better than several Netflix Original Films released to date, but that’s a low bar, since avoiding badness by being mediocre isn’t exactly high praise.

Gervais headlines Special Correspondents as meek, geeky sound technician, Ian Finch, sharing the spotlight with Eric Bana’s harsh, cynical and opportunistic radio reporter, Frank Bonneville. To the movie’s credit, Gervais and Bana do have good comedic chemistry here, which is one of the small handful of bright spots that keep Special Correspondents from feeling like a complete waste of time. 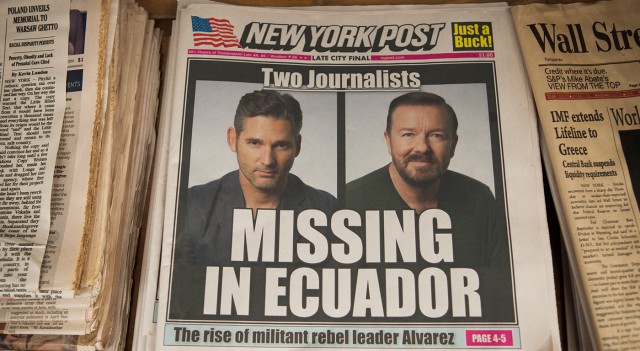 With that said though, Bana stands out a lot more than Gervais does, even though Gervais has definitely written several of the movie’s stronger jokes for himself. The reason why Bana stands out among the cast, and it’s not a bad cast by any means, is that Bana at least gives the movie the biting edge that it so desperately needs and craves. The problem is that Bana can’t carry this entire movie on his own shoulders though. Even Gervais sometimes fails to register, let alone the rest of the cast, which leaves Special Correspondents feeling like it lacks an impact with its personalities, despite how much it wants to be a witty political and media satire.

The rest of the cast, like I said, is fairly solid too. Special Correspondents’ lead performers include Vera Farmiga, Kelly Macdonald, Kevin Pollak, America Ferrera, Benjamin Bratt, and Raul Castillo. That’s definitely not bad, especially for a Netflix movie. Unfortunately though, several of these actors aren’t given a whole lot to do. Bratt’s character, a dishonest field reporter that’s only ever glimpsed on a screen, largely exists as a throwaway gag character that is completely disconnected from the main storyline’s stakes. Ferrera and Castillo manage some funny moments every so often, as eccentric Spanish cafe owners, Brigida and Domingo, respectively, who are friends with Ian, and go along with the movie’s core premise by providing the means for Ian and Frank to run their media con. Unfortunately, neither Brigida nor Domingo has any real depth to latch on to, and both characters are played purely for a batch of uneven gags. 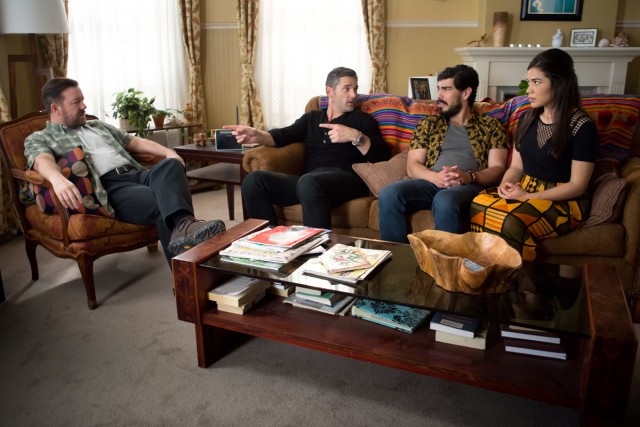 Given a bit more bearing on the plot are Pollak, who plays Ian’s and Frank’s impatient boss, Geoffrey Mallard, and Farmiga, who plays Ian’s vain, selfish wife, Eleanor Finch, but even they simply exist to pursue irrelevant subplots that generate gags, and little else. Mallard at least provides something of an obstacle for Ian and Frank to outwit, but considering the stakes of their con, Mallard never truly feels like a credible threat to their operation. Despite the fact that he’s smart enough to head an entire radio news network, Mallard never once detects that anything is wrong while Ian and Frank are willfully deceiving the public, and that makes him a bit of a weak antagonist. Both Mallard and Eleanor are attempts at Special Correspondents having real antagonists for both of its lead characters, but they’re half-hearted villains that are just as toothless as the rest of the movie, unfortunately. Even Macdonald’s character, another love interest for Ian, might as well have not been there, and simply exists to create a predictable Hollywood ending that further undercuts the movie’s attempt at a biting tone.

Like I said, it’s not like the movie’s characters aren’t unfunny, and they will at least make you chuckle at a fairly acceptable rate. It’s just too bad that the characters don’t feel more meaningful in a movie that clearly wants to turn heads, even being hosted on Netflix, yet clearly lacks the actual intelligence to do so. At worst, Special Correspondents feels like a waste of a good cast, or at the very least, one that isn’t able to fully live up to their potential in a satirical comedy like this.

It bears repeating that the best and funniest thing about Special Correspondents is its premise. The idea behind the movie is actually pretty hilarious, with Ian and Frank running into trouble after their radio news job wants to send them to Ecuador to cover a violent political revolution. After Ian loses their passports, money and flight tickets however, both men find themselves on the verge of losing their jobs, and Ian losing his marriage, so they hatch a plan; Hide out in a local Spanish cafe, and pretend to broadcast coverage of the revolution, by effectively faking a live report on the radio, while completely safe in their home city of New York.

That’s a very funny idea, and one that was no doubt realized better in the original French movie from 2009. Unfortunately, the entire progression of Special Correspondents feels pretty suspect, with the second act being the strongest and the funniest, as Ian and Frank must find ways to keep their con unknown to the public, yet still get out to look after themselves in New York. The first act however is rather contrived, as the means by which the men lose their passports and other such papers is pretty ludicrous, and would definitely never happen in real life. The third act is where things really fall apart too, as the movie devolves into a very misguided climax that further takes it out of reality, and just reeks of contrivance at every turn, since the movie ultimately wimps out of truly exploring the fallout of the core idea behind it.

If Special Correspondents merely aimed to be silly and ridiculous, then perhaps the bizarre plot turns would be more acceptable. When the movie is clearly aiming to be an indictment and satire of the lack of honesty and remorse behind the modern media however, and how the public eats up blatantly false pageantry in lieu of real news, taking the movie too far out of reality is not a good idea. Unfortunately, that’s exactly what Special Correspondents does. The movie may have a brilliant idea behind it, but it continually squanders and undermines that idea with its clumsy execution, which turns what could have been a hilarious comedy into a mildly amusing, mostly forgettable one.

Gervais is a brilliantly funny man, and he’s even proven to be a pretty strong writer at times, when he’s working with the right premise. Unfortunately, as a director, Gervais is a lot more unreliable. He seems to have a fairly good idea of helming a television episode, but doesn’t have nearly as much understanding of how to helm a movie.

As you can imagine, Special Correspondents suffers from several of the same direction shortcomings as The Invention of Lying did, namely the fact that this movie feels like it’s afraid to truly go the distance with its core idea. Considering that Gervais can be so good at a biting wit, to the point where he’s one of the most divisive Golden Globes hosts in history, it’s weird that Gervais seems to be afraid to truly realize a dark comedy. Instead, Gervais makes fluffy, light-hearted comedies with dark comedy ideas, and that’s why his direction often seems to be at odds with itself.

Special Correspondents is an acceptable comedy, but a limp satire. The movie’s intention and overall message is clear, but it doesn’t manage to convey said message with any degree of real power. Instead, Special Correspondents saunters along, acting as if it has a lot to say, but when the spotlight is actually on it, the movie seems to choke under pressure.

If you’re a fan of Ricky Gervais, or are just bored and looking for an acceptable Netflix comedy to watch, Special Correspondents is a movie to watch once, be mildly amused at, and then quickly forget about. The movie is at least leagues better than the offensively terrible The Ridiculous 6, and at least doesn’t stumble at the rate that Crouching Tiger, Hidden Dragon – Sword of Destiny does, mainly due to its more modest ambitions, but there’s still not much to make Special Correspondents stand out in the end, especially when Netflix actually did pretty well with the great Pee-wee’s Big Holiday recently.

The frustrating thing is, Gervais is a very talented comedian, which is why his struggles with making good movies are pretty unfortunate. Gervais is clearly a clever man, and maybe he’ll eventually get the hang of directing a truly worthwhile comedy movie. For now though, Gervais still seems to be figuring out how to properly capitalize on his movie ideas. He definitely doesn’t botch Special Correspondents, but it’s still too blatantly a rough draft for a man who is clearly capable of better.

Special Correspondents Review
Special Correspondents is another Ricky Gervais comedy that ultimately wimps out of truly having teeth, but it's got glimmers of good ideas, and enough chuckles to make it worth a one-off watch.
CHARACTERS70%
PLOT60%
DIRECTION65%
THE GOOD STUFF
THE NOT-SO-GOOD STUFF
2016-05-10
65%Overall Score
Reader Rating: (0 Votes)
0%