The Pokémon Company has revealed a bit more information about the upcoming Pokémon Sun and Moon games coming to Nintendo 3DS this November.

Gameplay has been revealed, and looks very similar to the art style and design of what we saw in Pokémon X and Y in 2013. The games’ region, Alola, is clearly inspired by Hawaii, with a very tropical, beach-heavy theme. Expect lots of surfer puns and totally rad dudes.

Starter creatures include the usual mix of grass, water, and fire types. This time around, there’s grass/flying type Rowlet, a fire kitten called Litten, and what appears to be a seal-like creature in Popplio. 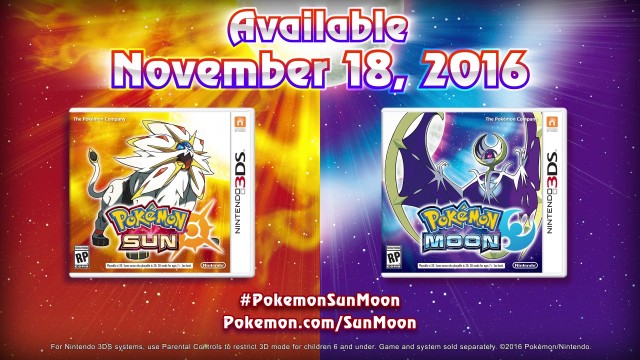 The box art for the games has also been revealed, and it shows two brand new legendary Pokémon, though there are no details on either. One looks like a mega-evolved version of Entei while another looks like a mega-evolved Lunatone. They could actually be mega-evolutions of existing Pokémon, but it would mark the first time that legendary Pokémon are evolutions from pre-existing creatures, which would be a major departure from the series.

Take a look at the trailers for the games above and let us know what you think about the new Pokémon, gameplay design, and the new Hawaiian-inspired region.