Let me make a confession: I haven’t enjoyed a Pokémon game (not including spin-offs) since Pokémon Silver. While in theory I would like to enjoy every game in the series, something about them didn’t resonate with me the ways I would have liked.  Was it because developer Game Freaks stayed within their comfort zone for six generations? Quite possibly.

I was hoping to change that with the latest in the series, Pokémon X and Y.  Frankly, I was ecstatic to know the game was targeted for old and new fans alike, featuring plenty of classic favourites while opening us up to a fresh 3D world we could have only dreamed of as kids.  The core concept might still be the same, but this new generation has reinvented itself in some truly amazing ways.

One of the first, and most defining, new features in Pokémon X and Y is the aforementioned 3D world. Kalos is the first region in the series to showcase a dynamic camera alongside vast and vibrant landscapes.  The graphics are by no means perfect, but they offer something unlike anything we’ve seen before in the series. For once, we actually feel small in this bustling world and, while a little overwhelming at first, makes it that much more immersive.

Aside from the visual revamp, Pokémon X and Y features several smaller changes well worth checking out like Mega-Evolutions, Pokémon-Amie, O-Powers and Super Training.  Whether experiencing wicked new evolutions (albeit temporary), bonding time with your team, sharing special boosts with friends or permanently amping your team’s stats with some mini-games, this new adventure is jam-packed with new features.

Connectivity is another important feature that has been vastly improved upon this time around.  By utilizing the 3DS’ wireless communication, you can see everyone playing the game, thanks to PSS (Player Search System), battle and trade with total ease. You can even StreetPass with other players and earn special points that can be used to purchase rare items like Rare Candy and PP Up.  I’ve never felt as connected as I do in this game.

While there is a lot to love about Pokémon X and Y, there is one jarring issue that keeps it from being the best in the series. For one, this game is simply too easy for its own good.  Sure there are ways to fight against the handholding (notably turning your EXP Share off or saving those Great Balls and Super Potions you receive far too early in the game), but many are simply unavoidable.  It’s great to know Nintendo is encouraging both new and old fans to get back into the spirit, but excessive handholding is another thing entirely. I don’t remember fans like myself having these luxuries in the past, so why now? 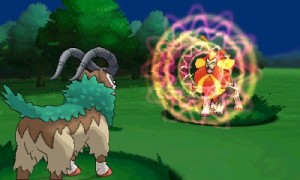 That then brings up the question: can the difficulty of a game dictate the quality of the experience? In most cases I’d say no, but considering the series history I do feel that this difficulty drop can greatly affect it.  What I can give Pokémon X and Y credit for is the amount of freedom you’re still given through it all.  You still have the ability to make your experience as difficult as you want it to be (fan-made rules like the Nuzlocke Challenge come to mind), but does this make things all better? No. Accessibility and easier gameplay should not be synonymous.

Fighting through my feelings hasn’t been easy as there’s lots to enjoy. Pokémon X and Y still takes some big leaps in innovation, but falls back on what is considered “accessible” — it’s an issue that stands out more than it should and has already swayed some devout fans of the series. Pokémon X and Y invites us into a bright new future, but at what expense?