It’s been a very busy year for Sony! Even putting aside the imminent high-profile launch of the PS4, Sony has provided numerous high-profile exclusives for the existing PS3 hardware throughout 2013, including God of War: Ascension, The Last of Us and Beyond: Two Souls, among others. With a year like this, packed with well-publicized triple-A offerings for the PlayStation faithful, it’s inevitable that some other PlayStation offerings are bound to slip through the cracks, escaping most of the public eye.

Puppeteer is one of those games. It also happens to be one of the most criminally underplayed games of 2013, simply due to the fact that it’s one of the most colourful, charming and giddily entertaining games in the entire PS3 library, even releasing in the twilight period of the console’s long life cycle.

Puppeteer is a 2.5D platformer that unfolds in the style of a grand theatrical puppet show, complete with a hysterically whimsical narrator and plenty of fourth-wall breaking jokes. Players control Kutaro, a Japanese boy yanked from his bed by the machinations of the Moon Bear King, who aims to usurp the power and kingdom of the Moon Goddess by empowering himself and his puppet army with childrens’ souls. Kutaro quite literally loses his head during the confrontation with the Moon Bear King, but is rescued and led away by a flying cat named Ying-Yang. With his soul trapped in a puppet’s body, and forced to navigate with all manner of mismatched replacement heads, Kutaro is the only hope to set things right for the Moon Goddess and her kingdom.

You see, Kutaro is the chosen hero that is fit to wield the enchanted scissors, Calibrus. After stealing them back from the Moon Bear King, Kutaro must use Calibrus to shear through scenery and foes alike, liberating the souls of captured children, and striking down the Moon Bear King’s evil animal generals. The journey spans seven Acts, each split into three stages called Curtains, and quite literally never contains a dull moment! 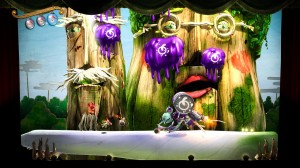 In terms of play mechanics, Puppeteer is highly accessible, able to be picked up and played with relative ease by both casual players and young children alike, but still remaining thoroughly enjoyable for more hardcore PS3 gamers. Players run and jump through the various cute, diorama-esque obstacles, using Calibrus to attack and float through scenery as necessary, and later on making use of some special moves you’ll earn at set points throughout the story. Fans of LittleBigPlanet will definitely feel right at home with this brand of straightforward, cutesy platforming, but thanks to the very clever, varied level design, and the superb implementation of Kutaro’s special abilities, particularly Calibrus, Puppeteer stands apart as something entirely unique and especially charming as far as PS3 platformers go.

Further adding to the already-unpredictable and surprising environments is the fact that players can use a variety of collectible heads to interact with the scenery. Pressing Down on the Directional Buttons with the proper head equipped will sometimes open bonus paths, expose hidden goodies, and sometimes even rocket Kutaro into a Bonus Stage, where he can collect Moon Sparkles (a hundred nets you an extra life, just the latest nod to the platforming foundation laid by Super Mario Bros.), within a time limit. Some heads are expected things like novelty hats, skulls and foliage. Others however are quite off-the-wall and especially fun to mess about with, including bananas, rocket ships and even a guillotine!

Should Kutaro take damage, whichever head he has equipped will bounce off of him. He has a limited amount of time to touch it before it disappears, at which point he equips another head in his inventory, with players able to carry up to three heads at any one time. Should Kutaro run out of heads however, he’ll lose a life, which will also knock you back to the beginning of whichever scene you’re playing, but thankfully, these checkpoints are reasonably generous.

Combat and exploration rarely feels complicated to boot, with only one enemy, the puppet-like Grubs, being present much of the time. It’s true then that you’ll sometimes find yourself falling back on the same old Calibrus navigation between the otherwise creative and varied stage backdrops, especially since the ‘enemies’ can all be dispatched in the same easy fashion. On the bright side, the huge amount of secrets to discover in each stage will still have players constantly wanting to play and replay levels, as there’s almost always something new to discover if Kutaro is willing to take his time and poke about the scenery.

Kutaro is also joined by a sidekick to this effect, the mouthy pixie, Pikarina, who can be moved about with the right analog stick. If you move her onto suspicious scenery, you can press R2 for the chance to unearth Moon Sparkles and other such bonuses. A second player can even take control of Pikarina with another controller, which is a great way to share the playing experience with a non-gamer, or perhaps a parent/child combination!

If you happen to own PlayStation Move, Puppeteer even allows a second player to navigate Pikarina by using the Move Controller (sans Navigation Controller), pressing the Move Button to dig up treasures for the player controlling Kutaro with the regular Dual Shock 3 controller. Curiously, this feature isn’t advertised on the front of the box art, unlike most any other PS3 game that supports PlayStation Move, but it is there. This option further lowers the barrier of entry for assisting players without an extensive gaming pedigree, literally turning Pikarina’s controls into a simple point-and-click process! 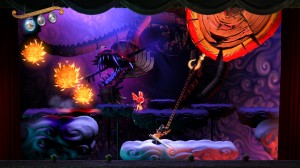 Having a second player is hardly essential, but it does make treasure-collecting much easier, on top of being required for a handful of trophies. On top of that, if a less capable player is controlling Kutaro, the two-player option easily allows a guiding player as Pikarina to highlight points of interest for an uninitiated player, whether it’s a path ahead, or the weak point of a boss.

Speaking of the bosses actually, Puppeteer’s boss battles, while not hugely challenging for the most part, are very well-designed and immensely fun to experience! Like the stages themselves, the bosses are incredibly varied and boast the same kind of infectious, whimsical silliness that makes the rest of Puppeteer so irresistibly adorable and charming. Even not being that tough, the bosses still feel grand in silly spectacle, and as a result, these foes will still feel satisfying, even if experienced PS3 gamers will almost never be taxed by them.

Really though, Puppeteer is not about hair-raising challenge. It’s one of those video games that is just pure unapologetic fun. Even the production values, from the ostentatious diorama visuals to the ludicrously exaggerated sound effects, is meant purely to elicit laughs and smiles. It’s appropriate that Puppeteer be so incredibly audience-friendly too, since it directly addresses players and spectators as an audience. You’d be hard pressed to find any kind of person, regardless of their gaming experience, who wouldn’t enjoy Puppeteer’s super-sweet presentation and outstanding sense of humour!

While the game will last a modest eight or so hours of playtime on the first playthrough, assuming you don’t skip the many lengthy cutscenes (and you shouldn’t, as they’re highly entertaining!), Puppeteer’s replay value is strong, particularly for trophy hunters! Puppeteer has a whopping fifty-eight bronze trophies to collect, as well as some well-earned silver and gold trophies along with the obligatory platinum trophy, for good measure! Many of the trophies are goofy and are often given for discovering more silly surprises in the stage design, but there are some reasonably challenging ones that will test your platforming reflexes as well!

Considering that Puppeteer launched at a budget price of $39.99, the sheer amount of delightful content in this charming little PS3 platformer is quite generous!

It’s really a shame then that Puppeteer didn’t launch with more fanfare and hype, as it’s second only to The Last of Us in terms of being the PS3’s top must-play exclusive for 2013! It will definitely appeal to a wider audience in contrast to Sony’s other high-profile 2013 offerings on the PS3, which are almost exclusively directed at mature, experienced gamers. Puppeteer however is just as playable for more casual PS3 owners and young children, regardless of prior gaming experience. It’s just one of those rare video games that can legitimately claim that anyone can approach it and enjoy it, and it deserves more attention as a part of 2013’s PS3 catalogue, even with the PS4 around the corner!

Thus, if you own a PS3, do yourself a favour and buy Puppeteer, especially considering its discounted price. We assure you, it’s the most fun you’ll have all year on Sony’s current console!