Nintendo held a holiday preview event in Toronto this past week (as they do every year), and we got our hands on virtually all of their upcoming games for the 2013 holiday season! Here are some quick thoughts on each one we played:

The Legend of Zelda: A Link Between Worlds isn’t a game we’ve ever heard of befo… Okay, that won’t work here. It should be no surprise that this game is the first we talk about because it was the first we bee-lined for when we arrived at the event. Sadly, the demo that we played was the same as the one from E3 2013 (and the one from before that, too), but there’s a reason.

Sitting down with Matt Ryan from Nintendo of Canada, we learned that Nintendo is “just showing that E3 demo because we don’t want to spoil any of the game. There’s a lot of anticipation, there’s a lot of questions about what’s the going to be like and what’s the tie in to A Link to the Past … but we’re doing something different which is because we want you to discover it when you play it.”

It looks like that all got turned on its head this morning with the release of the trailer below, however, helping to grow anticipation for the title that launches in exactly three weeks. Take a look: 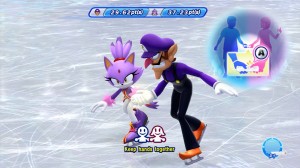 Mario & Sonic at the Sochi 2014 Olympic Winter Games isn’t something that’s typically on our radar. We’re not huge sports games buffs (ever notice you’ve never seen a sports game reviewed on here?) nor are we fans of games with ridiculously long titles, but this one was a surprise. Hitting the Wii U on November 15th in North America, Mario & Sonic is a gleefully fun game. With 16 sports to choose from, the game gives fans some new experiences with the Wii Remote such as two players holding onto it at once for tandem figure skating. The game also plays to Canadian hearts with ice hockey and some bobsled action.

Mario Party Island Tour is hitting the Nintendo 3DS at the same time as A Link Between Worlds, and while the game is more of a single player experience this time around, it still features four-player multiplayer via local download play, so only one person needs a copy of the game, and the other three can still be right next to you so you can trash talk them while they steal your coins. The levels we played were very short, though it was hard to tell if that was the demo or the actual level length, but it was very reminiscent of the WarioWare games of years past. We have to say that, just hopping into a few rounds of the game, we instantly smiled and thought back to those classic Nintendo 64 days. Island Tour looks to bring back that fun.

Shovel Knight is a game that was funded on Kickstarter and will be heading to the Wii U and 3DS/2DS eShop this holiday season. It harkens back to the 8-bit games of yesteryear with a beautifully put together level and attack system. The controls are simple: move right and left, and hit enemies with your shovel. Some levels have more puzzling mechanics, such as traversing a set of falling chandeliers to get to the other side of a room, while others require more precise timing for jumps and taking out enemies. Make no mistake, the game might look pixelated, but it is challenging like the games it represents, and the ten minutes we played with it makes us want more! 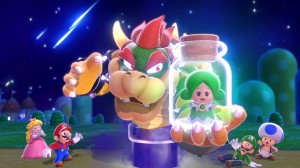 Super Mario 3D World is, of course, the big hitter coming out of Nintendo for the Wii U this holiday season. We haven’t seen much new content since we got the rundown at E3 2013, so we’ll employe you to check out our preview of the game there, but we will say that we’re more excited for Mario’s return to form in this game. We’ve recently replayed Super Mario 3D Land on the 3DS, and while we’re still not convinced it’ll make a great jump to the Wii U – it is a portable game at heart, after all – we’re getting more excited about the possibilities every day.

What are you most excited about from Nintendo for this holiday season? Olympics? A Link Between Worlds? Maybe Shovel Knight? Let us know in the comments below and on Twitter and Facebook!