The final battle against Hive has now begun in the two-episode season finale of Agents of S.H.I.E.L.D. Beginning with, “Absolution”, S.H.I.E.L.D. starts hunting down Hive and his forces before they can launch a warhead that will make subservient Inhuman abominations out of most of Earth’s population. Daisy, meanwhile, struggles with the guilt of her actions while under Hive’s control, creating two interesting story directions for the early stages of the season’s climax.

As you might expect from this two-episode setup though, the first half of the season’s finish is the lesser of the two, especially since it has to build up to the more exciting final confrontation to come later. “Absolution” wasn’t completely devoid of excitement, especially as Hive and S.H.I.E.L.D. both manage a few nifty tricks to slow each other down, but it’s clear that the real excitement was yet to come, especially as the spectre of an imminent death hangs over the team, one that we know won’t be answered until the following episode.

With the season coming to its end, we saw a very different side of Hive in this episode, after some quick thinking and actions by both S.H.I.E.L.D. and the Secret Warriors (save for Joey, who is strangely absent for some reason) results in Hive’s initial warhead launch being aborted. For the first time, we see an angrier and more aggressive rendition of the character, and this was quite appealing, as Hive’s desperation begins to seep through his eerily calm exterior. The loss of Daisy appears to have unhinged Hive to a point, possibly calling back to the base desires of Grant Ward’s body, and this is another reason why Hive now seems more visibly bothered and less sure in the wake of S.H.I.E.L.D.’s persistent pursuit.

Also effective in this episode was an instance where the S.H.I.E.L.D. team manages to temporarily slow Hive down by scrambling his brain with some nasty electronic equipment, courtesy of Mack, Lincoln and Elena. This leads to Hive’s personalities going haywire, with memories from Will, Ward, and even some unknown people starting to slip through, as Hive struggles to regain his bearings. This was a really neat reminder of just how mighty and imposing Hive is, even when he’s vulnerable, with Coulson also putting it best when he points out that going against Hive means going against every scientist, every soldier, every genius and every killer that he’s fed off of. It’s hard to believe that John Garrett and Jiaying are dwarfed so heavily by this character, but it’s really true!

Unfortunately, despite this engaging material with Hive and his psychology, the rest of the episode is a little more uneven. The team finally capturing Hive is pretty cool, and the way they do it is pretty creative, utilizing Elena’s slingshot-style speed to place a stasis cage marker over him when his memories are scrambled, but it’s not long before Hive’s ace-in-the-hole just bails him out. After the team keeps wondering about something called, “Absolution”, taken from some intel that Daisy gives up, it just turns out to be a Terrigen bomb meant for a town in Montana called Absolution, which instead just goes off in a sealed hangar and mutates some S.H.I.E.L.D. personnel, who nearly kill Fitz, before he gets away. The show makes it look like Fitz will die, after he takes Elena’s cross, seen floating in space in Daisy’s vision, but obviously, it doesn’t happen, since this is still the first half of a two-episode finale.

Likewise, Daisy’s ‘withdrawal’ from Hive’s influence is kind of hit-or-miss. The idea that Daisy is struggling with being free of Hive, and that her body and mind are still craving his addictive parasites, is pretty cool on paper, but her relentless guilt gets a bit tiresome after a while. Some guilt is expected and logical, but Daisy goes full on pity-party here, to the point where she throws her friends’ forgiveness in their faces, and basically acts like a bratty teenager. Considering how strong and appealing Daisy’s character usually is, this schtick feels beneath her, since she’s the type to stand up and take action, rather than sit there and wallow in self-pity. 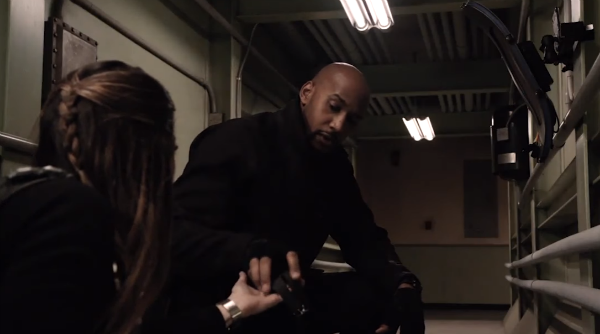 Fortunately, the climax of the episode, which sees Daisy make contact with a freed Hive, before Daisy begs Hive to take her back, is a little more interesting. It’s a bit contrived that Lash somehow conveniently made Daisy impervious to Hive’s control (how exactly did he do that?), but the scene of Daisy actually begging Hive to re-infect her was nicely chilling, and would have been especially impactful, had the episode not laid her guilt on so thick, and focused more on the withdrawal aspect. Still, things ending with Daisy defiantly sending some bad vibrations after Hive is fair enough, which finally makes her look more like the Daisy Johnson that the Marvel Cinematic Universe has already groomed up to this point.

“Absolution” would have been a pretty disappointing Agents of S.H.I.E.L.D. episode by itself, but fortunately, it’s just the first half to a larger season finale event, making some of its shortcomings a little more forgivable. The episode still had some good moments that worked very well however, such as the material with Hive, and some of the little character moments with Fitz and Simmons. Plus, Radcliffe officially joins the S.H.I.E.L.D. crew towards the end of the episode, to help them try and develop a cure for Hive’s infection, and that’s quite an intriguing prospect. It was inevitable that the best excitement from the season finale would be saved for the second episode of this week, especially when the person marked for death obviously won’t kick the bucket in this offering, but fortunately, the wait for how everything ultimately ends is just one commercial break in this case, not a whole week.