Much like The Flash, Arrow seemed to stumble a bit in the season’s penultimate episode this week. “Lost in the Flood” felt like it had to hastily wrap up the whole angle of Darhk’s underground paradise, while also laying the groundwork for the actual final showdown with Damien Darhk in the season finale next week. Fortunately, the episode at least had no shortage of solid action, but the weak storytelling did drag things down at a frustrating rate.

One of the big problems with the episode is that it takes up an opportunity that the season has largely glossed over until now, namely in having Oliver ponder whether Darhk is right about the world being impossible to save. This is brought up during a passing moment, but then it’s never spoken of again. Anarky’s continued antics conveniently get the vigilantes back in the game, as they must race through Darhk’s underground town to try and stop him, before a whole lot of innocent people are killed, on top of the whole world of innocent people that Darhk is trying to kill above. It’s a whole whack of a hostage situation in the DC Television Universe this week, apparently. 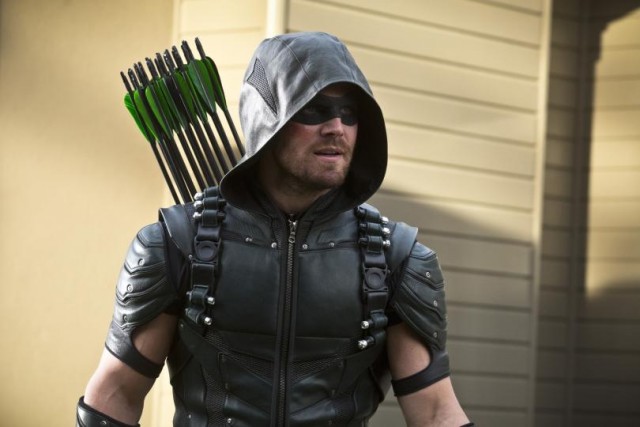 Beyond this frustrating, thankless attempt at a debate over Darhk’s actions, many of the scenes in the underground town were at least pretty good. Having Oliver and Diggle find their way in, then race through a whole bunch of Ghosts and fleeing innocent bystanders to try and stop Anarky before he blows up the entire settlement, makes for a lot of thrills. Anarky is also coming along better with every episode it seems, as he continues to be a surprisingly effective menace, and one that proves equally slippery for both the good guys and the bad guys. Oh yeah, and apparently that electrical shock did kill Alex at the end of last week’s episode. They finally clarified that in this episode. So, Thea is predictably pissed…

… Until she’s drugged. Yep, Merlyn slips Thea one of those happy yellow pills when she gets predictably difficult over the fact that Anarky just killed her boyfriend, turning her into yet another antagonist for Oliver and Diggle to try and deal with. Oliver having to briefly fight off Thea makes for another pretty cool action sequence, but Oliver giving Thea one brief pep talk and breaking her brainwashing immediately feels cheap and contrived. Why bother drugging Thea then, if the solution is that easy? That’s a pretty huge design flaw in Darhk’s drugs, if you ask me.

Sadly, any material that went on above ground in Star City also largely fell flat. Felicity and Noah recruit Curtis to help them disable Rubicon once and for all, resulting in more outlandish computer sorcery, though Darhk has a trump card this week, as he recruits Felicity’s murderous ex-boyfriend, Cooper to try and out-hack the hackers. I’m not sure where exactly Darhk found Cooper, but whatever. The show doesn’t even bother to try and explain it either. Anyway, Cooper and the heroes have a bit of a hacker battle, which would have been cool, had it not been so ridiculous, even by the standards of Arrow. At least the former hacking duel between Felicity and Noah had the proper effect earlier in the season, since it seemed semi-reasonable.

This episode also strangely shoehorned in a bunch of family drama that, frankly, really shouldn’t have been there when the show is on its second-last episode of the season. This largely comes from Donna nosing in to what Felicity is doing with Noah, resulting in a bunch of fighting and dredging up old family issues, all of which simply serve to waste time during a very urgent conflict. Even the bomb that Donna was the one who left, not Noah, falls completely flat, since it just doesn’t feel like the right time to be exploring this story element. This all just served as a roundabout excuse for Donna to learn that Felicity works with the Green Arrow, which she could have learned in any number of fashions, even in Season Five! 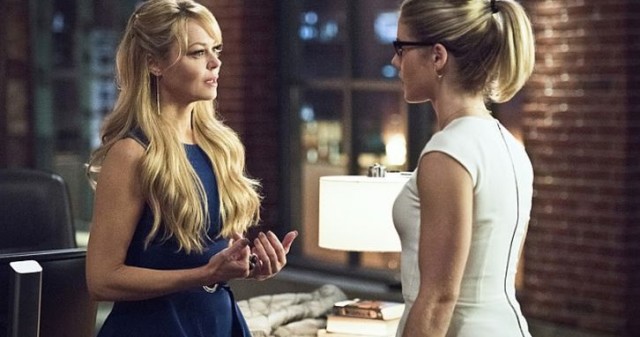 Also, by the end of the episode, the entire underground settlement goes belly-up, since Anarky takes Darhk’s wife and daughter hostage, then conveniently goads Oliver and Thea into shooting an arrow into some Dwarfstar tanks that end up leveling the place, probably killing most of the people in the town, despite Merlyn’s evacuation efforts. The ambiguous fate of Merlyn and the survivors that he was attempting to lead is fairly interesting (even if Merlyn no doubt survived), but the ease in which Anarky took down Darhk’s entire operation is kind of laughable. Why would Darhk have such a delicate Dwarfstar mechanism in plain sight for just any old joker to light up? Ruve ends up being killed in the chaos, in an attempt to mirror Tommy Merlyn’s death from Season One, but it doesn’t feel like it matters at this point. Even as the destruction of Darhk’s town seems to almost entirely level The Glades, ironically having Merlyn’s initial plot succeed several seasons later, the show just kind of hangs on an apathetic note, with Thea even making a crack about it. It’s not until Darhk actually shows up in the loft and talks about bringing Hell to the world that things get interesting, and that’s right at the very end of the episode.

On the bright side, the flashbacks to Lian Yu improved a bit this week, especially as Diana begins to fall further and further into the influence of the idol. Becoming dark, twisted and violent, and desperate to increase her power, Diana starts gaining a disregard for human life, and becomes obsessed with violence and destroying her enemies. This is a very interesting turn, even if it’s happening pretty late in the season, but it’s neat to have Diana gaining an interesting new dimension, while Reiter’s idol gains a whole new level of danger. When Reiter predictably shows up right at the end to face off against Diana, the stage is set for a fairly interesting magic-powered duel next week for the season finale, even if we could probably anticipate that both characters will just end up dead afterward, stranding Oliver on the island all over again.

“Lost in the Flood” feels pretty hamstrung by having to get everything in place for next week’s season finale, but even if much of the storytelling was disappointing, the exciting sense of thrills at least helped to compensate for that. When all is said and done, Arrow did at least succeed in setting up next week’s season finale on a satisfying note, better than The Flash ultimately did for its own season finale, even if it had to force a few developments to make that happen. With his wife dead and his daughter missing, now in Oliver’s care, Darhk has got a renewed desire to watch the world burn, and now that he doesn’t care about saving anyone, he’s become more dangerous than ever!