Television is rapidly becoming crowded with comic book-inspired shows, to the point where even specialized graphic novel imprints are getting small screen adaptations. DC Comics’ Vertigo imprint, currently dedicated to specialized graphic novel stories that take place outside of the DC Universe, has already seen two of its graphic novels make the leap to television recently, specifically iZombie on The CW and Lucifer on FOX, and now, AMC is adapting their own Vertigo graphic novel, Preacher, which has just debuted its first episode, running at a special 90-minute length.

Amazingly, comedian, Seth Rogen and his frequent writing and producing partner, Evan Goldberg were the primary forces that brought Preacher to television, after the graphic novel series originally joined DC’s Vertigo catalogue in the 90’s. Don’t be fooled though! Preacher is not a comedy… Mostly. In all honesty, Rogen and Goldberg have given a slight black comedy styling to their TV adaptation of the cult comic, but it really works, and prevents the show from becoming overwrought and over-serious, making it more entertaining, similarly to how FOX’s Lucifer also became noticeably more light-hearted than its source comics, and benefited from this. Also like Lucifer, Preacher is pretty loosely adapted from the graphic novels, though the spirit of the comics is alive and well in the TV adaptation, and the many great leads from the comics are all present and accounted for in this first episode.

You’d never imagine that a fairly dark graphic novel series adapted by Rogen and Goldberg, the silly minds behind Superbad, This is the End and The Interview, would ever be good, but Preacher is actually pretty great, at least in its first episode! The show is visually gripping, has tons of personality, and as I said, it respects the core appeal of the original Vertigo graphic novels, without replicating the same stories. Already, the show feels smarter and more entertaining than the recent offerings from AMC’s fellow comic book adaptation, The Walking Dead and its spin-off, even if it noticeably deviates from the source stories, and inevitably has to tone down the frequent foul language and outrageous levels of gore from the original comics. At the very least though, this first episode is still fairly gory, if you care about that kind of thing.

Perhaps the biggest strength of Preacher at this point is its lead cast, which is perfectly chosen, exceptionally written, and portrayed with aplomb. Leading the cast is Dominic Cooper’s Jesse Custer, a beat-down and cynical priest who runs a small monastery in the tiny town of Anvil, Texas. Jesse clearly has a few dark secrets, which are cleverly hinted at throughout the pilot, such as Jesse watching his father die as a young boy, and having a violent history with his ex-girlfriend, Tulip O’Hare, though wisely, the show doesn’t overplay its hand. Instead, it portrays Jesse as a worthy accidental hero with a secret agenda that gradually becomes clear as the episode goes on. By the end of this first episode, you’ll understand Jesse very well, and already have plenty of reasons to root for him, even when he seemingly feels that God has abandoned the world. That’s smart writing, and again, it proves that Rogen and Goldberg are far more talented writers than many would initially believe, especially since they also directed this pilot episode, to outstanding effect!

Speaking of Jesse’s former lover, Tulip, who currently shares a rather complicated relationship with him, she’s also fantastic in this first episode, where she’s portrayed by Ruth Negga. Tulip is a proudly rough-and-tumble opportunist who can definitely hold her own in battle, being introduced with a flashback to a rather violent tussle over a job that she’s going to pitch to Jesse, which is as awesome as it is surprisingly funny. Tulip having to subsequently bond with some children that inadvertently witness her impromptu murder spree, where she both takes out a helicopter with a homemade bazooka and literally kills a guy with an ear of corn, is outwardly silly, yet it works to sell just how badass and independent this character is. Preacher isn’t shy with referencing its comic book origins through characters like Tulip, and as with some of the clever dark humour in this pilot, it helps to make the show very entertaining to watch.

It’s hard to believe, but Tulip is definitely not the zaniest character within this concept either! Jesse’s buddy, Cassidy from the graphic novels shows up, and yes, he’s still a vampire in the TV adaptation. Similar to Tulip, Cassidy is introduced within a rather ridiculous action scene, this time on an airplane, where Cassidy wrecks a bunch of bad guys, then literally drinks blood from a broken wine bottle that he jabs into the plane’s pilot. Then, Cassidy falls to Earth, and makes a meal out of a curious cow to heal himself, after the impact ruptures his body to the point where all of his organs have fallen out. Like I said, even having to adhere to some of the restraint of television, Preacher still proudly embraces a comic book-style mischief to its action and violence, and just like with Tulip, it works for Cassidy, who is a character that is as interesting as he is comical. It stands to reason that Cassidy would also meet Jesse in jail after helping him with a bar fight, whereupon he moves into the church without telling Jesse. Man, the cast of this show rocks! They’re really selling the series by themselves, and that’s before the many other strengths within this pilot! 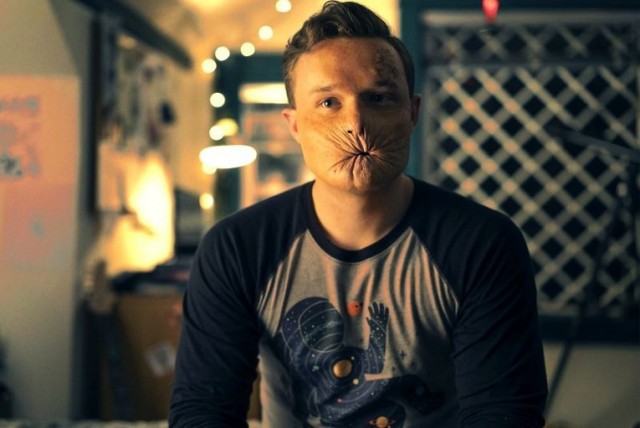 Given less bearing, but still showing up in this first episode, are Sheriff Hugo Root, a conservative, nasty lawmaker who respects Jesse without necessarily liking him, and Root’s son, Eugene, better known in the comics as, “Arseface”, since his face looks like a… Well, you can guess. While it’s not spelt out yet in this first episode, Eugene attempted suicide by shooting himself in the face with a shotgun, only to botch it, and end up with his rather unfortunate disfigurement. Despite said disfigurement however, Eugene seems to be a pretty nice guy, and definitely looks up to Jesse, who encourages him to attend church and not fear the community, despite his ghastly appearance. Arseface’s presence really helps to give Jesse a more likable side, even as he struggles with grief and guilt, and beats up abusive husbands in bars, plus his distinct appearance definitely helps him stand apart from any other television character, that’s for sure!

The one major character that wasn’t present in the source comics, and was made up for this TV adaptation, is Emily Woodrow, who essentially works as the assistant of Jesse, as well as his church’s organist. Emily also works part-time as a waitress, and provides a moral grounding for Jesse, despite Jesse losing faith in God and the world. Emily doesn’t currently stand out as much as the other characters, but there’s a lot of promise behind her as an original new personality, as she helps Jesse see the light where God fails to do so. She seems like a transparent love interest for now, but maybe the show will surprise us.

Things end with a mysterious force going into Jesse, which seems to imbue him with the power of divine influence through speech (to the point where he accidentally convinces an annoying parishioner to go to Florida and cut out his own heart in front of his mother!), and attracts the attention of two mysterious individuals. Said presence splattered both an African priest and a Russian Satanist magister into paste before finding Jesse (which are the few moments where the show almost becomes as gory as some of the source comics), so it’s clear that this power to influence people has found Jesse for a reason, but I suppose that we have to find that out later. 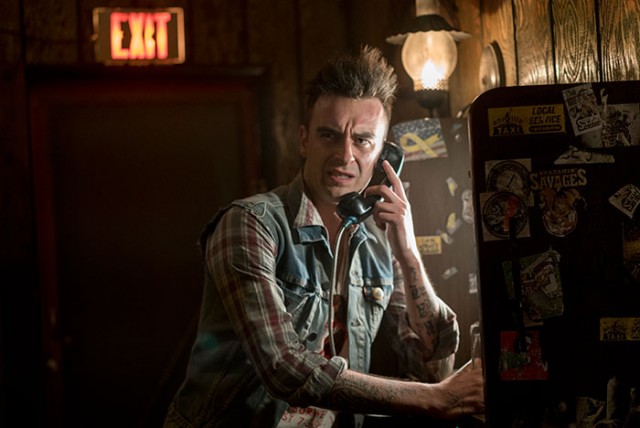 I doubt that Preacher will struggle to generate interest either, at least for anyone who is in the market for a cool and memorable new comic book show. Fans of the original Vertigo graphic novels will enjoy how well the show emulates and builds upon the source comics, and those who have never read the Preacher comics will have no trouble seeing the appeal, between a lead cast that is already easy to love, and a slick sense of style that makes Preacher feel appealing and distinct in contrast to the many other comic book-inspired shows on TV right now. I can say without exaggeration that Preacher’s pilot episode is sublime, and it already feels comparable to the best of current comic book shows such as The Flash, Daredevil, Jessica Jones and iZombie. Anyone who considers themselves a comic book enthusiast, an occult enthusiast, or just loves great television in general, absolutely needs to check this show out!