Having now reached the halfway point of its current season, Silicon Valley has largely abandoned the big new developments it proposed for Season Three, and has more or less gone back to upholding the status quo. “The Empty Chair” saw the last of the new and improved Pied Piper be sold off and forgotten, and by the end of the episode, even Richard being removed as company CEO was undone.

This might annoy some, since it’s pretty transparent backtracking. Despite the positive momentum behind switching up the dynamic of the show with Jack Barker and the expanded Pied Piper offices, it seems like the writers may have hit a wall with those ideas, hence why they’re going back to the show’s classic dynamic. I suppose that’s fine, especially since, “The Empty Chair” is still a very strong and funny episode, but it’s disappointing that the season didn’t ultimately go all the way with the radical new changes at Pied Piper. Even the threat of End Frame was ultimately neutralized as of last week, following Hooli absorbing them, and creating the same old threat to the guys that the first two seasons had. 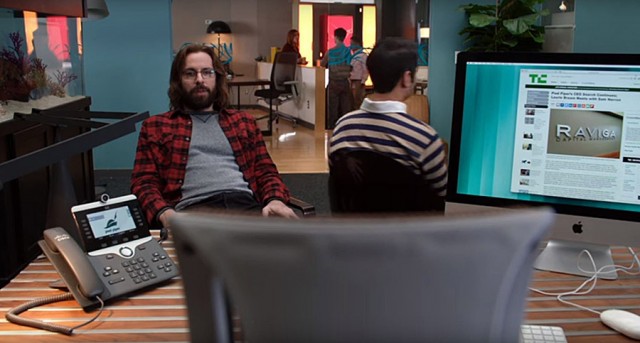 Fortunately, even if the backtracking is apparent, the reliable shenanigans with the guys continued to get laughs. Seeing Jared embrace selling off company stock to the elderly was amusing, as was Richard forcing himself to fire just about everyone that Barker hired during his short time as company CEO. Even the idea of Gilfoyle accidentally selling Dinesh’s personal hard drive to someone who gives it to their oblivious grandfather, forcing Gilfoyle, Dinesh and Jared to try and devise a way to scrub it to destroy sensitive company data, lends itself to lots of satisfying comedic possibility.

In terms of comedic possibility though, it’s Richard that mostly takes the episode and runs with it. The main plot of the episode involves Laurie trying to tell Richard to talk to a PR person in order to address a critical reporter that has written a scathing (and slanderous) article about Pied Piper’s technology, which is believed to be scaring away prospective CEO’s. Richard, however, is frustrated that Laurie won’t let him just take over the company, leading to him angrily ranting to the PR woman when he arrives, supporting Laurie’s declaration that Richard needs a PR person because he is inarticulate when he gets emotional.

The worst part? That wasn’t the PR lady. Turns out, Richard had blurted out all of his anger towards Laurie directly to the reporter, which was a pretty hilarious screw-up, especially when Richard getting lost and ending up in the wrong room is purely his own fault, due to desiring to prove that he’s not an idiot, ironically leading to him proving himself to be an idiot. Pouring salt in the wound is Laurie calling Monica to dinner to confess that she feels that she made a mistake in removing Richard as CEO, and is publicly meeting with applicants that she knows won’t be available or interested, including Big Head, with that knowledge being the catalyst to Richard’s rant to the reporter.

Richard initially seems screwed, and the episode intercutting his rant with Laurie’s confession to Monica effectively maximized the joke here. Fortunately, Richard, as usual, does luck out in the end though, after Big Head tries to arrange some business documents with Erlich, and inadvertently blurts out that Gavin Belson scrubbed negative mentions of Nucleus from Hooli’s search engine. Richard tells this to the reporter to avoid the negative story about him being published, which leads to him reclaiming his job as CEO! Again, it’s transparent backtracking, but there is a satisfying outcome here, as the right man to lead Pied Piper seemingly got the job again, which he likely always should have held in the first place. 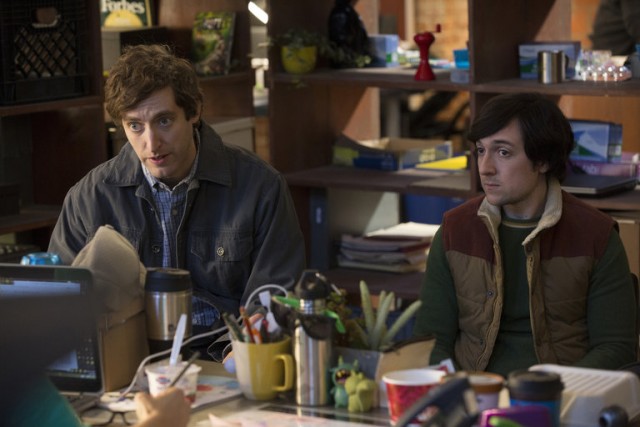 The subplot with Erlich and Big Head was very funny in general, and is the sole story element continuing to represent bold new ground for Silicon Valley at this point. It mainly consisted of throwaway gags and arrogant Erlich shenanigans combined with oblivious Big Head shenanigans, but it was amusing, and nicely filled space between the main conflict with Richard. Likewise, the resolution to the Gilfoyle/Dinesh conflict was pretty funny too, as Gilfoyle simply announces himself as a member of the Geek Squad to the old man that has Dinesh’s hard drive, then takes a power drill to the hard drive, then walks outside, and tells the actual Geek Squad guy that, as per his slogan, he’ll have to replace the hard drive, since he obviously can’t fix it. That final slight against Dinesh, where Gilfoyle didn’t bat an eye at destroying all of Dinesh’s personal data to save the day, made for a great cherry on top of this funny material as well!

“The Empty Chair” may have spent most of its runtime erasing most of Season Three’s prior developments, but that was easier to swallow when the show continues to operate on excellent writing and smart comedy. With Richard back to being CEO, and Pied Piper returning to what it once was, it’s likely that the company will once again find itself locking horns with Hooli, now bolstered by the hostile takeover of End Frame. Even then, at least the business dealings of Erlich and Big Head should provide some novel entertainment on the side, especially considering how much Erlich is disinclined to keep a big wave of success to himself!