Gotham’s setup for the season finale last week in the great, “A Legion of Horribles” was very exciting, setting the stage for a seasonal climax that was sure to send Season Two off with a bang!… Which makes, “Transference” a considerable let-down this week. Instead of being an exciting proper climax for the season, this season finale instead ended up strangely lacking urgency or real excitement, enacting a workmanlike setup for Season Three, while also relying on some weird humour that doesn’t really land.

Said humour comes from Clayface, who is sent outside by Hugo Strange, to get rid of the cops standing outside of Arkham Asylum. Yes, rather than set a trap for the GCPD, or do anything remotely competent or threatening, Strange sends a blatantly hammy Gordon impersonator to get rid of the police, and that somehow works. So much for the police racing to Arkham at the end of last week’s episode. 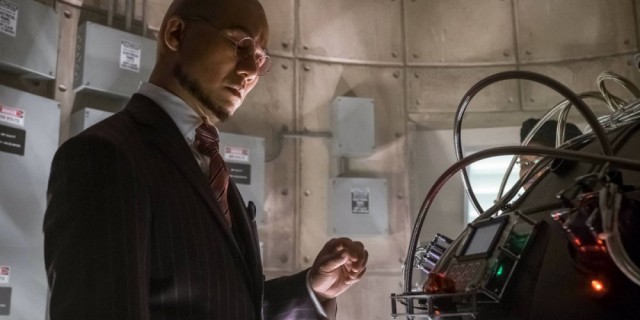 The idea of Clayface impersonating Gordon and infiltrating the GCPD was pretty promising, even if it’s ill-advised to try and push this idea right at the very end of a season. Still, the idea is ruined by the fact that Basil Karlo is apparently a pretty terrible actor in the Gotham universe. For some reason, Bullock, and even Alfred, don’t immediately sense that something is very wrong with Gordon. Sure, Clayface claims it’s, “The flu”, but why in the world would they buy that? This clearly isn’t Gordon. The fact that it takes Barbara of all people to point this out, after Clayface stupidly claims that Gordon doesn’t care about Leslie anymore, is pretty embarrassing. Bullock may have rough edges, but he’s not a stupid man, and in the case of Alfred especially, there’s really no excuse. How the hell did this plan work at all?! Hell, Gordon shouldn’t even have the authority to call off the police at this point, so why would they just take a hammy Gordon’s word that everything is fine?!

Frankly, the whole Clayface angle was put into place simply to prolong an episode that would have been immediately over, had the GCPD sensibly stormed the building. Instead, Bruce and Lucius are left to attempt to solve a quiz game by Nygma, which aims to test what they know about who really runs Indian Hill and Wayne Enterprises. At the same time, Strange has drugged Gordon with truth serum, and is trying to get the same answers. Since no one actually knows about the Court of Owls yet, no incriminating information is turned up however, meaning that Strange can set a bomb and leave, and Nygma can just turn on deadly gas and kill both Bruce and Lucius!… Except that obviously doesn’t happen. For some contrived reason, Bruce and Lucius are dumped right next to Gordon, alive and well, before Strange just puts Nygma back in his cell, and Selina just conveniently reaches them to tell them about the bomb. Yeah, sorry, but that’s just plain lazy writing. 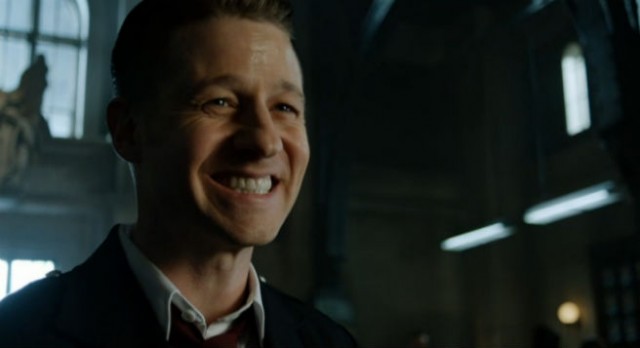 Around this time, Strange tries to tell Mr. Freeze to kill Selina, though Selina is protected by Firefly, resulting in one of this episode’s better moments of excitement; A brief duel between the two elemental super-villains. Once Gordon intervenes however, Strange stupidly lets himself get caught between both the flamethrower and the Freeze Gun, which he miraculously survives, in another instance of total bullshit, even for the DC Universe. Why even bother hitting him with a combined fire and ice assault, if it’s not even really going to do anything to him? Gordon could have just as easily knocked him flat, even after being drugged. It’s not like Hugo Strange is a fighter!

Someone who is a fighter however is Fish Mooney, who uses her convenient suggestion powers to convince Ms. Peabody to let her out of her cell, to join the other evacuating patients. While she’s initially locked out, Gordon trying to stop the bomb eventually lifts security and lets Fish free, while Gordon and Lucius force Nygma’s assistance to get into the bomb chamber. They then pour water on the bomb and stop it at the very last second. Uhhh, really? That’s not much of a bomb, if a little bit of water can stop it cold, especially considering how big and imposing it looks! 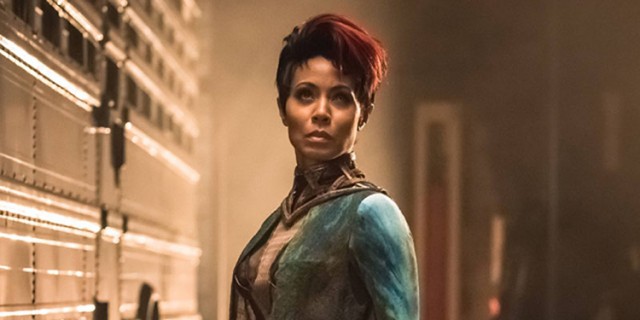 So, the day is mostly won, Strange is arrested, Bruce relays the vague information about the Court of Owls to Alfred, who humourously acts exasperated that Bruce has found yet another reason to go dealing with criminals, and Gordon even decides to go off and find Leslie, giving us a convenient reason to pause Gotham’s canon for the seasonal gap between Season Two and Season Three. Fish Mooney however, is still at large, until some intervention by Butch and a gatling gun knocks her bus over, and seemingly scares away the GCPD. Penguin also shows up to lay some hurt on who he thinks is Hugo Strange, only to discover that Fish Mooney is alive, fainting in shock, though not before Fish touches him and presumably puts him under her influence. Looks like we’ll be seeing more of Fish Mooney in Season Three, since even Butch runs scared of her right afterward. Still, a powered Fish Mooney could be an interesting angle for next season, especially with Penguin yet again being stripped of his mob power for now.

The final tease for Season Three comes when an apparent homeless woman hears the Arkham Asylum freaks in the bus, which Fish apparently left unattended (I guess Penguin woke up and disappeared too), and lets them out, having no idea what she’s doing. The episode ends as some blurred imagery gives vague looks at some of the twisted Indian Hill experiments, with teases like the unmistakable laugh of Jerome among them. The only noticeable bit is of a shaggy clone of Bruce Wayne that thanks the woman, which is also very interesting, since, while Bruce was cloned at one point in DC Comics lore, it was by arch-villain, Darkseid, who obviously won’t be showing up on Gotham. What possible reason would Hugo Strange have for cloning Bruce? I guess we’ll have to wait until Season Three to find out… Though, considering the Jerome laugh, could this clone end up being the Joker of the Gotham universe? That would be unorthodox, but definitely not impossible. 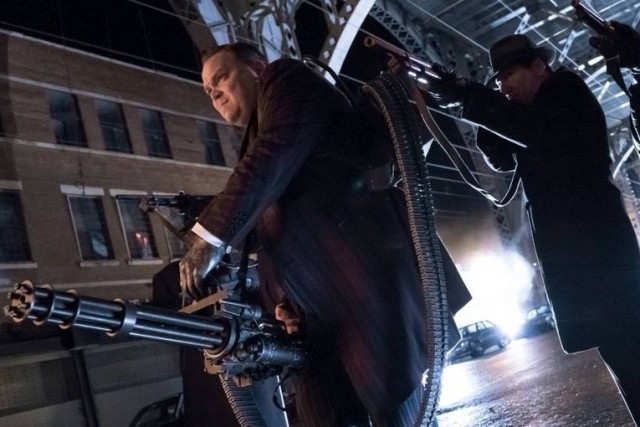 Still, “Transference” was sadly a disappointing way to conclude Season Two of Gotham. Despite its valiant efforts, the show just didn’t generate that much excitement as the season wound down, instead unceremoniously wrapping up the Hugo Strange and Arkham Asylum/Indian Hill arcs for now, while laying on thick teases for the inevitable rise of the Court of Owls in Season Three. There were some interesting bits, such as Fish Mooney returning to the city, and Bruce already preparing to take on the Court of Owls and continue digging into his company’s sordid legacy, but for the most part, the episode was sustained on obvious death fake-outs and a really unconvincing Clayface. Season Two of Gotham may have been a noticeable improvement over Season One, but it’s too bad that it couldn’t keep that positive direction going for the season’s conclusion.