NOTE: This review may contain minor spoilers for the first season of “Lady Dynamite.” With that said, the review is written to accommodate those who have not yet watched the series, and as such, will avoid discussion of major plot developments.

Maria Bamford is not your run-of-the-mill comedian. Whether it’s her alternative stand-up style or her Bipolar II Disorder, Bamford is pretty far from normal, though she never struggles to be interesting! The same could definitely be said about Bamford’s new Netflix series, Lady Dynamite, the latest in a long line of subversive Netflix-exclusive sitcoms that relishes in the opportunity to delve into the kind of material that regulated network television would never properly allow.

In this case, Bamford is being up front about the ups and downs of her mental condition, using Lady Dynamite as a way to convey the dizzying highs and uncomfortable lows of mental illness, in a fun, colourful and proudly meta light. It’s a sweet idea, and one that the first season of Lady Dynamite actually accomplishes with aplomb, as the series dresses down and de-stigmatizes mental illness, celebrating that being supposedly mentally defective isn’t a social death sentence, and your self-worth is ultimately decided by you, and no one else.

Of course, in being so proudly eccentric and weird, it’s also fair to say that Lady Dynamite isn’t for everyone. Despite critics lavishing tons of acclaim on the show’s first season, many audiences have reacted pretty harshly towards it, with the show barely squeaking above a two-star audience approval rating on its Netflix page at this point. This is just one of those sitcoms that you will either perfectly understand, or not understand at all, with no real middle ground.

It’s also fair to claim that people who either currently suffer from a mental illness, or people who have suffered from any kind of mental health issue in the past, are probably most likely to understand where Lady Dynamite’s unique brand of humour is coming from. Its proud dysfunction calls back to an uncensored version of something like cult sitcom, Titus, yet the show is also given a candy-coated sense of colourful optimism that pretty blatantly markets it towards the misfit viewers who took so happily to Netflix’s own Unbreakable Kimmy Schmidt. Even when the show is at its most surreal and disquieting though, Bamford’s earnestness and likability keeps it positively captivating and very easy to binge through, even when not every viewer will consistently understand just what the hell is going on.

Just as the optimism works to make the show likable and avoid feeling like a vanity project, the darker elements of the show are also effectively constructed, even when they delve into weird, unnerving territory, often at random. That’s the method behind the madness of Lady Dynamite however. It’s supposed to confuse you sometimes. It’s supposed to make you feel uncomfortable sometimes. It’s supposed to make you feel lost and overwhelmed sometimes. That’s all intentional, and it’s Bamford ingeniously framing what it’s like to suffer from an unpredictable, sometimes volatile mental condition, which could throw you for a loop and turn your world view on its head at any minute, much like how the world of Lady Dynamite is never perfectly safe or consistent.

Again though, the darkness is offset by an inspired sense of fun, which is framed over the course of three different time periods; The past, before Bamford’s breakdown and subsequent committing to a mental institution, which is done with extra sunny cinematography, the time during and shortly after Bamford’s stay in said institution, which is done with darker and tinted cinematography, and the present day, which is done with normal-looking cinematography. The first season of Lady Dynamite thus chronicles with blunt honesty many real-life inspired experiences, mistakes, redemptions, found and lost loves, and many other random happenings over Bamford’s recent years, and how she initially lost, and subsequently found herself again, even in her darkest time. 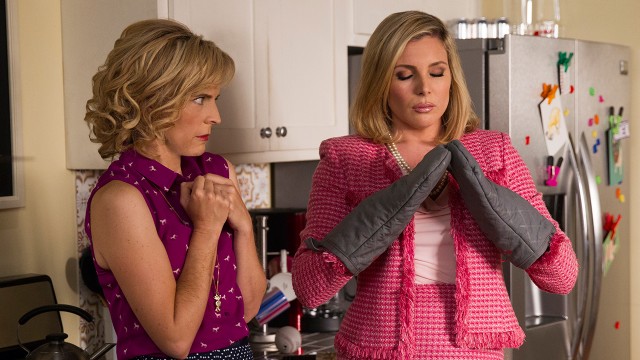 Appropriately then, many of the show’s characters are very over-the-top caricatures, which fits with Bamford’s exaggerated, almost child-like view of the world. Whether it’s her perpetually arguing and brutally honest best friends, her spineless manager, her foul-mouthed talent agent, her out-of-touch parents, her vain and spoiled childhood friend, or her kooky love interests, every personality inspired by Bamford’s life experiences in Lady Dynamite is very memorable in their own way. Despite the real-life inspiration, none of these characters feel all that realistic, but that’s kind of the idea. They act as Bamford perceives them, giving both creative license to Lady Dynamite that helps the characters stand out more, as well as creating more opportunities to mine more eccentric humour from this wide array of people across three separate time periods.

The first season’s episode plots also effectively emulate this exaggerated weirdness, with premises that certainly wouldn’t feel out-of-place in a darker rendition of Unbreakable Kimmy Schmidt. One episode, for example, has Bamford trying to date a man with a former meth addiction that allegedly makes him bisexual, while another episode involves Bamford employing an adolescent mentor to help her overcome her fear of children, while yet another episode has Bamford hiring a, “Loaf Coach” that actively forces her to do nothing and neglect her duties and peers. Like the characters, the episode plots are creative and highly memorable, standing firmly apart from the frequently trite sitcom plots that so often show up on syndicated television especially.

None of this changes the point that Lady Dynamite isn’t for everyone though. For some, the bizarre, abstract humour will just be impenetrable, or perhaps too uncomfortable. For others, they may simply find that Lady Dynamite doesn’t speak to them exactly the way they want it to, depending on their own outlook on mental health and the world at large. One of the showrunners and creators, Mitch Hurwitz, is also the creator of cult sitcom, Arrested Development, which has now been resurrected on Netflix with an additional season, and has another on the way, so that should give you another idea of exactly what kind of comedy you’re in for with Lady Dynamite, namely comedy that doesn’t give a damn about honouring audience expectations or genre conventions, for better or for worse.

For those willing to meet it halfway though, Lady Dynamite will likely be one of the sunniest, most lovable examinations and roasts of mental illness that you’ll be able to find on the small screen, let alone on Netflix. Some of it will come off as insane ravings to those who don’t understand where Bamford is coming from with her experiences, but that’s intentional, and the main draw of the series. Each episode closing out with a choir singing, “I don’t know what I’m doing even half of the time” pretty much says it all, with the show even occasionally breaking the fourth wall to acknowledge its own possible failings. This humility contributes to making Lady Dynamite feel lovable though, even when it’s weird and sometimes difficult to take in all at once, probably exactly like Maria Bamford in real life. The first season feels pretty definitively wrapped up, and some of the cold audience reception may kill hope for a second season, but as it stands, Lady Dynamite is still one of Netflix’s better original sitcoms, especially for those who view themselves as broken or irredeemable from mental illness. To those people, it’s no doubt invaluable that a show like Lady Dynamite exists, to illustrate how and why, with any mental struggle, everything will ultimately be okay.

Lady Dynamite: Season One Review
Lady Dynamite is a strange, disquieting sitcom that definitely isn't for everyone, but those that can appreciate its earnest and sunny examination of mental illness will find it to be immensely lovable and cathartic.
THE GOOD STUFF
THE NOT-SO-GOOD STUFF
2016-05-29
85%Overall Score
Reader Rating: (0 Votes)
0%