Starved fans of 3D platformers got a bit of welcome respite with this past April’s Ratchet & Clank remake, but beyond that, they’ve largely been left to wait for Playtonic Games’ highly promising Kickstarter-funded throwback, Yooka-Laylee. That wait just got a bit harder too, as the game has slipped into early 2017, despite originally targeting a launch this October. 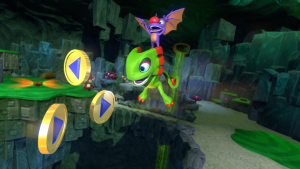 Issuing a statement on the delay, developer, Playtonic Games confirmed that Yooka-Laylee is proceeding very well, and that the handful of added months simply come down to the developers wanting to be extra sure that the game is as polished and fun as can be before it releases to the public. Playtonic assures that the Toybox demo that was promised to backers will still be distributed on schedule next month however.

Finally, Playtonic and publisher, Team17 released a new trailer for Yooka-Laylee slightly ahead of E3 today, which does seem to prove that the game is coming together wonderfully, and has no shortage of fun and personality throughout its gameplay and characters. Several of the characters’ power-ups are demonstrated, which seem to include rapidly rolling uphill, rushing around breathing fire, and what appears to be morphing into some sort of antenna.

Yooka-Laylee was a huge smash hit on Kickstarter, raking in just over two million British pounds during its crowdfunding campaign (approximately three million U.S. dollars.), with its developer, Playtonic Games being comprised of former Rare veterans. The game is meant to be a spiritual successor to Rare’s highly beloved Banjo-Kazooie games on the Nintendo 64, both of which were included in last year’s Xbox One compilation, Rare Replay, alongside their eccentric Xbox 360 follow-up, Banjo-Kazooie: Nuts & Bolts. Yooka-Laylee’s new trailer even makes a subtle jab at the fan backlash to Banjo-Kazooie: Nuts & Bolts when it was first announced and released for Xbox 360, with the title characters joking about the, “Brown level” not being in the trailer, and later quipping that the game will probably have car sections by the time it makes its delayed release in early 2017.

Yooka-Laylee is in development for PC, Mac, Linux, PlayStation 4, Xbox One, and Wii U.

Keep leaping to Eggplante for all major news and updates on Yooka-Laylee.