Easily one of the most anticipated PlayStation 4 exclusives currently in development, Horizon: Zero Dawn is sure to be a big centerpiece at Sony’s E3 2016 press conference next week! Sony is capitalizing on the hype early with a brand new trailer for the game, and one that finally confirms when we’ll be able to get our hands on it! Unfortunately, we’ll also be waiting longer for the game than originally planned though. 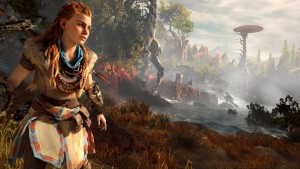 Despite Sony initially targeting a late 2016 release for Horizon: Zero Dawn, the new trailer confirms that the game has slipped into next year. Horizon: Zero Dawn is set to hit PlayStation 4 on February 28th, 2017, and while that means waiting a bit longer, you can pre-order the game now if you’re so inclined, though we do recommend that you do it next week if you live here in Canada especially, due to traditional E3 pre-order discounts that offset some higher Canadian pricing.

Horizon: Zero Dawn is developed by Guerilla Games, best known for Sony’s first-person shooter franchise, Killzone, and takes place in a post-apocalyptic world where humanity has returned to a primitive tribal state, and gigantic, animal-like machines wander the wilderness. Taking control of skilled hunter, Aloy, players must embark on a grand adventure in a massive world, where they will aim to discover the mystery of what happened to the world, and what may be further threatening mankind in the days to come.

Keep tracking Eggplante for all major news and updates on Horizon: Zero Dawn.