As is common for the crowded selection of E3 announcements on any given year, gamers are being allowed to open several of their metaphorical Christmas presents early this week, likely due to an over-crowding of E3 keynote announcements to make. Kicking off these announcements is Square Enix finally confirming frequent rumours that a modern HD remaster of their hit PlayStation 2 RPG, Final Fantasy XII is on the way! 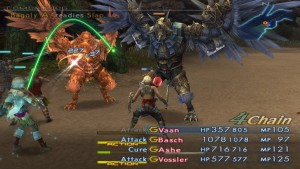 Final Fantasy XII: The Zodiac Age is in development exclusively for PlayStation 4, and will include the special ‘Zodiac Job System’ that was previously exclusive to a special edition release of Final Fantasy XII for Japan. The game will also include an entirely new ‘Trial Mode’, whereupon players can take on a series of monsters and enemies in up to 100 survival-style battles. Finally, beyond an expected HD overlay to the visuals both in-game and during pre-rendered cutscenes, Final Fantasy XII: The Zodiac Age will also be re-recording an all-new suite of music, with players having the option to switch between the remastered soundtrack, and the original PlayStation 2 soundtrack from 2006 at their leisure.

Final Fantasy XII was somewhat controversial upon its initial PlayStation 2 release in 2006, due to overhauling the series’ purely turn-based combat into something of an MMORPG-hybrid battle system, with players able to freely move and engage enemies on the same screens that they found them, as well as have A.I. characters completely dictated by passive commands called ‘Gambits’. Despite that however, Final Fantasy XII was still very successful, especially since it launched mere weeks before the PlayStation 3 hit the market, with its final recorded sales of 2007 nearing the six-million mark worldwide.

Final Fantasy XII: The Zodiac Age is set to release at some point in 2017, and will be playable on the E3 show floor next week.

Keep questing to Eggplante for all major news and updates on Final Fantasy.