After a solid start to the season, Powers continues to healthily move upward with, “Funeral of the Century”, which concludes the initial arc of Retro Girl’s death by showing her funeral, as well as her successor. As the epilogue scene of the season premiere promised, Calista fully adopts the mantle of Retro Girl, or at the very least her costume, towards the end of the episode. Before that though, Walker and Pilgrim have another problem.

With the passing of Retro Girl, it’s believed that the loss of a major deterrent in Retro Girl between two rival gangs of Powers, the Quantums and the Hacks, is about to plunge them into a battle. Since Powers Division rightly believes that Retro Girl’s highly-publicized funeral will be a hotbed for potential Powers-related terrorist attacks, Walker takes Pilgrim to talk to an old associate of his, Nucleus, who happens to be the leader of the Quantums.

What made this storyline great is how it trimmed out some of the unfocused fat from the season premiere, and almost purely focused on the very strong, appealing plot of Retro Girl’s funeral. Building off of the story of Retro Girl’s death causing lots of public unrest, everyone began to brace for a major disaster, and that slow burn worked to superb effect in this episode. The episode did a great job of keeping any potential turns close to the vest, with both the Quantums and the Hacks nicely established as dangerous, unpredictable gangs in their own right as well.

The only storyline that still isn’t quite clicking with everything else is Zora’s. There’s a bit of a subplot where Zora goes to angrily confront her publicist about some demeaning online videos and a rather unfortunate stool-softener ad campaign, after being freshly annoyed by a small army of onlookers, but it doesn’t really go anywhere of note. Zora is getting ever more tired of the celebrity culture surrounding powered people, and that’s apparent, but the episode doesn’t do much with this after it brings it up. The story already had plenty of opportunities to mine commentary on Powers culture with the death of Retro Girl still being a big issue, so as with the season premiere, Zora might as well have not shown up at all. 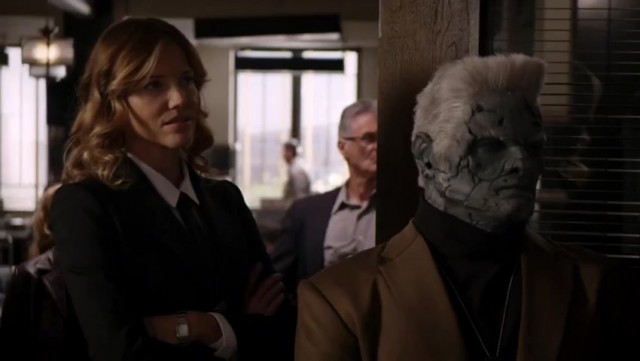 Still, just about every other scene in the episode was executed exceptionally. The Retro Girl mystery is continuing to develop in a satisfying way, and things only get more intriguing when Walker tries to make sure that the Quantums stay cool at Retro Girl’s funeral, only to have both Nucleus and all of their higher-ups appeared to be killed by another member that Walker knows, Laser. This seems to have the Hacks ready to make a major play, until the Hacks’ leader comes to Powers Division and temporarily shuts it down to point out that he could have become an issue for the cops at any time, yet chooses not to cause trouble, out of respect for Retro Girl. Not only do the Hacks claim no responsibility for the attack on the Quantums, but they’d never do anything to disrespect Retro Girl, meaning that it would be against their honour to commit any kind of crime or terrorist act at her funeral.

Whether or not the Hacks are telling the truth is another matter, but Walker believes them, and this continues to have everyone on edge as the funeral begins. This was another standout sequence, as Senator Brown speaks at the funeral about Retro Girl’s heroism, and how it affected the world around her. Seeing the protests outside of the funeral become violent and uncontrollable around this time, intercut with the speech about Retro Girl, was very effective, and showed just how delicate the world has become in Retro Girl’s absence, made all the better by the irony that the fighting was over Senator Brown’s own legislation. This seems to further highlight Brown potentially not being on the level, and possibly not even caring that Retro Girl is dead, since he’s probably one of the most likely suspects, and one that Powers Division probably hasn’t spotted yet.

The struggles also serve as the time for Calista to finally reveal herself as the supposed new Retro Girl, and I must admit that this is probably the most appealing that Calista’s character has been so far. Assisting the police in rounding up the protestors and the defenders that have turned violent, Calista then goes to speak to Walker on a rooftop, who tries to impress upon her the responsibility of using her powers well, and doing Retro Girl’s legacy proud. Calista is still very raw, and likely too raw, but she does wear the old Retro Girl costume fairly well, and she does have the early makings of a hero, wanting to do good for the world, and just not being fully clear how to do so yet. The idea of Walker mentoring Calista in being a hero is also a pretty promising one to take throughout the season, and will hopefully help to improve Calista’s character, after she was one of the weaker personalities in Season One.

Walker gets another win as well, when he chases an apparent face-shifter who pretended to be Laser (who is found in his home, dead for several days), and later Krispin, running him through a seedy sex club until he beats on him enough times to discover that he’s apparently the Hacks’ second-in-command, THX. Walker thinks he’s found Retro Girl’s killer, but again, it’s far too early in the season, and there’s no way that it’s that simple. Even if THX somehow did kill Retro Girl, he’s likely only a trigger-man, with the real perpetrator no doubt still out there. Again, my money is on Senator Brown. Still, this was a pretty strong twist with the Krispin evidence, and nicely explained why Powers Division could have been thrown off in the previous episode. 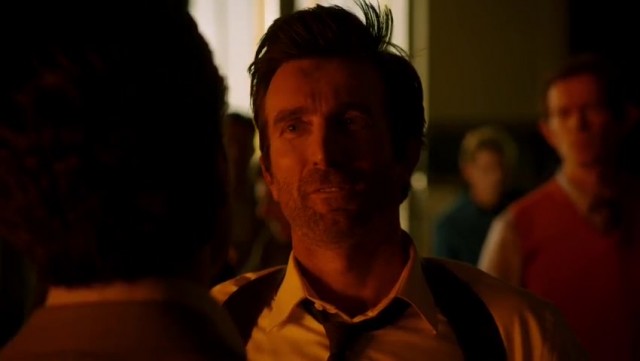 Powers’ second season is really coming along well so far, and, “Funeral of the Century” did even better than the appealing season premiere. The world continues to teeter on the edge of anarchy, barely pulled back by the emerging of Calista as the one who would take up the mantle of Retro Girl, but it’s still obviously not enough. Walker, Pilgrim and the rest of Powers Division still have a long battle ahead of them, and even if Walker is grooming a new Retro Girl, it’s up to Calista to decide whether she’s truly a successor, or just the same old wannabe.