Much excitement has surrounded the recent official announcement of DC Comics-themed fighter sequel, Injustice 2. That excitement grew at the recently wrapped ESL Mortal Kombat X Pro League competition in Burbank, which provided the first look at the gameplay in Injustice 2, including showing off three new faces, and three all-new additions to the roster, all of whom have been announced already. 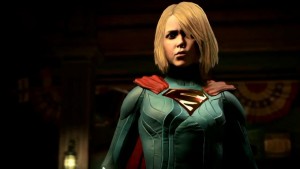 The reveal trailer depicts a handful of fights across arenas like Metropolis, Gotham City and Atlantis, and has Superman, Batman, Aquaman, Supergirl, Atrocitus and Gorilla Grodd all mixing it up with each other in combat. Brief looks are shown at their combos and special attacks, their unique super attacks (which have been updated for Superman, Batman and Aquaman), and how arena transitions continue to play a part in combat. One particular transition even appears to have Aquaman arch-nemesis, Black Manta showing up to help lay the hurt on a helpless opponent! This doesn’t seem to confirm that Manta is a playable fighter however, and he seems to just be a background flourish when you’re knocking an opposing fighter through Atlantis from the right angle. Still, there’s always the possibility that Manta could be added to the roster in the game’s inevitable suite of DLC fighters, if there’s enough demand for it. So far, the gameplay looks to be very similar to the original Injustice: Gods Among Us, though Netherrealm Studios has announced an RPG-style character gear system that aims to separate the sequel from its predecessor, which hasn’t yet been shown in proper detail.

Some special T-shirts depicting various DC Comics-themed symbols and tools were handed out at the Mortal Kombat X tournament in Burbank as well, which offer a few hints as to who else may be showing up in Injustice 2’s playable fighter roster. Fans have identified the iconic Cold Gun wielded by Flash enemy, Captain Cold on the shirt, for example, a character that would definitely make sense in Injustice 2, considering the enormous popularity of Wentworth Miller’s live-action portrayal of the frosty Leonard Snart in The CW’s DC Television Universe shows such as The Flash and Legends of Tomorrow. The helmet of Doctor Fate has also been identified by many fans, suggesting that the all-seeing Justice Society hero could also be making his way to Injustice 2. Finally, Harley Quinn’s hammer that she wielded in the original Injustice: Gods Among Us also seems to be present, suggesting that The Joker’s deranged sweetheart will once again be making an appearance in Injustice 2. 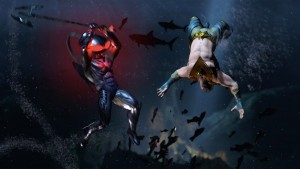 One thing we definitely won’t see in Injustice 2 however are Fatalities, which Netherrealm Studios boss, Ed Boon confirmed in an interview with IGN that was published around the same time as the gameplay reveal. Despite the driving force of Fatalities in Netherrealm Studios’ Mortal Kombat games, which Boon co-created back in the 90’s with John Tobias back when they were owned by now-defunct publisher, Midway, it looks like Fatalities will be staying firmly in the Mortal Kombat universe, with DC’s heroes and villains continuing to fight in a somewhat more dignified fashion. This will probably also mean that Injustice 2 will once again end up with a softer T-rating when the ESRB evaluates it, rather than the harsher M-rating that the Mortal Kombat games have all pretty much universally earned.

Injustice 2 is set to launch at some point in 2017, and is in development for PlayStation 4 and Xbox One.

Keep flying to Eggplante for all major news and updates on Injustice 2.