UPDATE: Microsoft’s E3 press conference has come and gone, and it has indeed confirmed the official release date of “ReCore” as September 13th for North America. Moreover, the game’s MSRP is being dropped to $39.99 USD/$49.99 CDN, and a Collector’s Edition is being offered for $179.99 USD, which contains the game, and two very ornate statues of the main characters. Finally, and strangest of all, “ReCore” is among several E3 games that is offering a free game as a pre-order incentive, but, being a new IP, the bonus game for those who pre-order “ReCore” is apparently… a digital copy of “Banjo-Kazooie: Nuts & Bolts,” a backwards-compatible Xbox 360 game that has nothing to do with “ReCore.” The only correlation is that they’re both Microsoft-published Xbox exclusives, and both vaguely involve a theme of building things.

E3 2016 has been a particularly unfortunate expo for leaks, and they’re still continuing! After already suffering an apparent leak of an Xbox One S announcement, Microsoft has now had another valuable nugget of info squeak out in advance of their E3 press conference tomorrow; The release date of one of this year’s big Xbox One/Windows 10 exclusives, ReCore. 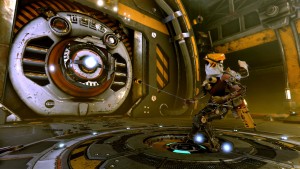 After being delayed out of its originally planned Spring 2016 release window, Microsoft assured that ReCore would still be arriving for PC and Xbox gamers before the end of this year. Now, NeoGAF has struck again, after also outing the Xbox One S, and confirmed that we can precisely expect ReCore on September 13th in North America, and September 16th in Europe. The post also comes with a few new screenshots of gameplay, confirming the obvious, that we can expect a first proper look at ReCore’s gameplay during Microsoft’s press keynote tomorrow. Microsoft doesn’t seem to be denying the leak either, as reporters that inquired about the leak were responded to by an ASCII render of a shrugging face, a sheepish and cheeky nod to Netherrealm Studios boss, Ed Boon’s comedic reply in the wake of his upcoming new fighter, Injustice 2 getting leaked ahead of its planned reveal at Burbank’s recent Mortal Kombat X tournament.

Developed by Armature Studio and Comcept, and published directly by Microsoft, ReCore is a colourful, post-apocalyptic action-adventure game that has players taking control of a young woman, navigating a desolate desert-like environment with a robotic core-like companion that can be placed into various machines, allowing the woman to make use of the appropriate technology for both combat and puzzles. Many gameplay details of ReCore are still unknown, but it appears to be a fusion of sensibilities shared between Metroid and Mega Man, which is fitting, since much of the game’s development team are veterans on both of those franchises.

We’ll no doubt have more ReCore news to share tomorrow, so keep plugging in Eggplante for all major news and updates on ReCore.