Ubisoft’s E3 conference had plenty of lengthy game showcases, and it’s difficult to argue that one of their most successful presentations was for South Park: The Fractured But Whole. Ubisoft’s conference showed off the first gameplay of the comedic RPG sequel, which follows up 2014’s well-received South Park: The Stick of Truth, a project acquired by Ubisoft from the bankruptcy of its originally planned publisher, THQ. 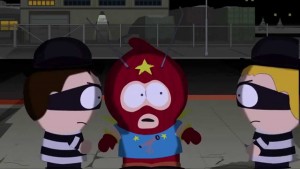 The original 2014 game, developed by Obsidian Entertainment, roasted fantasy RPG sensibilities with a distinct and very authentic South Park flavouring, but South Park: The Fractured But Whole, now developed by Ubisoft San Francisco, abandons fantasy satire in favour of an even bigger target of the modern era; Superheroes! Once again, players take control of a custom-designed ‘new kid’ (a.k.a. “Douchebag”), and play along with Eric Cartman’s band of snarky youths, who are attempting to craft their own improvised superhero franchise, and end up in a ‘Civil War’ when they can’t agree on who should be represented where in Cartman’s vision. Players choose from one of three initial ‘powers’ for their new kid, and customize the character’s traits and appearance from there. Needless to say, considering the superhero theme, the trailer takes a ton of shots at the movies and television shows of both Marvel and DC, and showed that the same hilarious sense of humour from the first game might provide even more laughs in the sequel!

Along with the same cheeky exploration capability of South Park as the previous game, South Park: The Fractured But Whole overhauls the more retro-style battle system from South Park: The Stick of Truth, and now places both allies and enemies on a grid that allows them to move during combat! Battles are still turn-based, but similar to beloved vintage RPG, Chrono Trigger, the placement of your allies and your enemies can affect the range and effectiveness of your abilities, giving you advantages and disadvantages in combat, especially when attacks on a character’s rear will be more damaging. As if that weren’t enough, players’ farts will play an even bigger part in combat as well, to the point where space and time itself will be at their mercy! With the right passing of gas, players can re-arrange enemy and ally turn order, similar to the battle system of Final Fantasy X, and can re-arrange battlefield placement in order to line up devastating follow-up attacks.