Boy, that escalated quickly. In all seriousness though, Game of Thrones finally shed its slight slump from the past two weeks, and fully righted itself with what’s likely to be the season’s very best episode, and one of the best in the entire series as a whole! “Battle of the Bastards” brought the long struggle to re-take Winterfell to a surprisingly quick, yet appropriately violent conclusion, as the shambles of Jon Snow’s forces go up against the superior Bolton army.

This episode was fittingly tight and very well-focused, and that was a big part of the reason why it made for such an enormously enjoyable penultimate episode for Season Six! That said however, we did still have a subplot, in this case, checking in with Meereen, right as Daenerys began stumbling in during the attack on the city. One still has to wonder how Daenerys just sauntered in while the masters started attacking Meereen, which is both questionable and rather dramatically convenient, but fortunately, the end result of this storyline was still very cool. 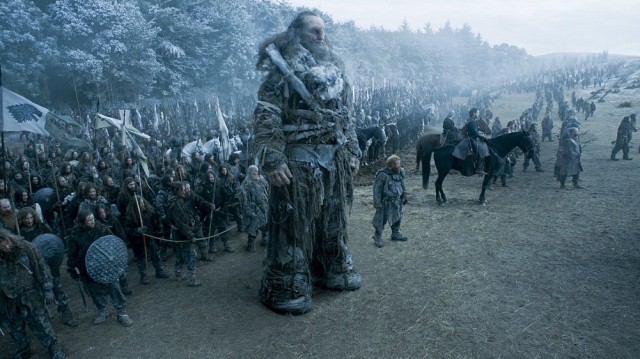 Tyrion finally makes himself useful when Daenerys wants to rush in rather violently, leading to a brief, but fitting remark by Tyrion that Daenerys is starting to sound like her father. Fortunately though, Tyrion is around to prevent more collateral damage. He convinces Daenerys to engage with the masters and talk terms of surrender, only to later bring up that the terms were for the sake of the masters during the actual talks, not Daenerys. The masters’ defiance and violation of the pact with Tyrion is paid with Daenerys’ dragons quickly laying waste to the naval forces, and seizing the rest of the ships, while the Dothraki take out the Sons of the Harpy on the ground, and seemingly instantly quell that rebellion for good. When Tyrion says that one of the masters has to die, two of the others try to point to a lowborn, and Grey Worm instead kills the two cowards and saves the lowborn, with Tyrion urging him to go back to the masters’ cities, and if they ever think of attacking Meereen or restoring slavery again, he should remind the masters about what happened in Meereen, the last time the masters tried that. This was a very satisfying way to have the alliance between Daenerys and Tyrion start paying dividends, especially since it fortunately closes the book on Essos’ slavery struggles for good, laying the way for Daenerys to start actually moving toward Westeros.

On that note, another surprisingly quick, but still satisfying plot turn in this episode saw Theon and Yara reach Essos, already, and get an audience with Daenerys. The two explain their situation to Daenerys, and propose an expansion to Daenerys’ fleet of ships, in exchange for Daenerys helping the two take out Euron, and reclaim the Iron Islands. Yara manages to get through to Daenerys in their shared history of bad kings for fathers and wanting to be better rulers, despite being women, and there’s even some subtle implied flirtation between the two that might suggest that Daenerys could be bisexual, though it’s smartly not spelled out. Regardless, Daenerys agrees to the alliance, and both Theon and Yara have a powerful new ally in their corner, even if we probably won’t see what comes of this until Season Seven next year. 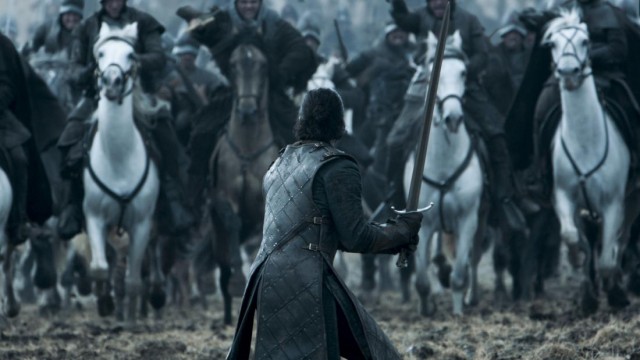 The main draw of this episode is, of course, the battle for Winterfell however, which is executed pretty much flawlessly! All of the buildup to this big conflict was worth the wait, and it makes for another incredibly-realized penultimate episode battle for Game of Thrones’ latest season! Jon and Sansa form another alliance that ends up paying off big, even if the drama behind the battle immediately hits the ground running when Ramsay appears to release Rickon to Jon, only to start shooting arrows at him, and successfully kill him right as Jon is about to reach him! Yes, for the first time since the Red Wedding, a Stark has died (if we don’t count Jon’s temporary demise), and the visual of Jon just barely being unable to save Rickon, exactly as Sansa predicted the night before, was a powerful and gripping one to start one of the biggest skirmishes in the history of this entire series.

That battle was choreographed wonderfully as well. Large in scale, incredibly intense, and completely Hollywood-worthy, the so-called ‘Battle of the Bastards’ was a fantastically violent spectacle that brought Jon’s and Ramsay’s forces to brutal blows. The action-packed conflict is a great high note for the season, especially since all of the chaos and death was captured so well. The pacing of the battle was also realized perfectly, as it initially looks like Jon’s forces may have a chance, before they start becoming surrounded and slowly overwhelmed. It then looks like Jon’s plans were all for nothing in the end… 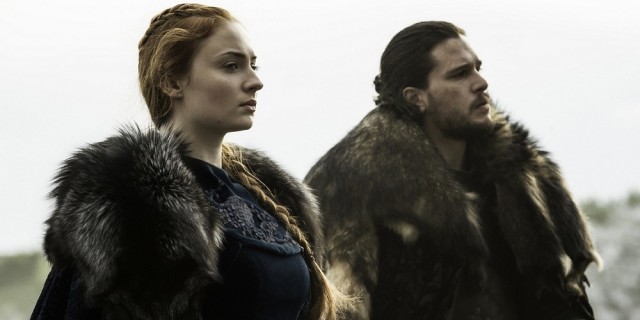 Ah, but remember that Sansa had plans of her own! Turns out, Sansa had indeed been writing to Littlefinger when she covertly sent a raven off, as many fans predicted, meaning that the Knights of the Vale charge in to save Jon and his surviving men, right as they are about to lose the battle! This leaves Ramsay’s army destroyed, and forces the Lord of House Bolton to retreat back into Winterfell. Ramsay believes he can wait out even the soldiers of The Vale, but the surviving giant from Jon’s army manages to breach the gate, leading to soldiers getting rid of the rest of the Bolton forces, and Jon beating Ramsay senseless before throwing him into the dungeons. Like I said, the alliance between Jon and Sansa perfectly came together for the good of Winterfell in the end, with Jon’s courage and Sansa’s wisdom finally reclaiming Winterfell for House Stark, at long last!

The episode didn’t let up in its final minutes either. Jon prepares to bury Rickon off-screen, but Sansa has another priority in mind. Visiting Ramsay in the dungeons, and bringing his hounds, Sansa reminds Ramsay that he hadn’t fed his hounds in seven days, and they have a taste for human flesh. You can probably see where this The Dark Knight-inspired moment is going. The episode ends as Sansa walks away, as we hear the sounds of Ramsay’s dogs eating him alive, making an exceptionally ironic and fittingly violent end for Ramsay Bolton. Even Sansa’s final words to her illegitimate husband ripped apart his legacy immediately beforehand, as Sansa claims that his name will disappear, his house will disappear, and he will disappear, with nothing left of House Bolton for history to remember. After the hounds are done with Ramsay, there will be nothing left of Ramsay himself either! 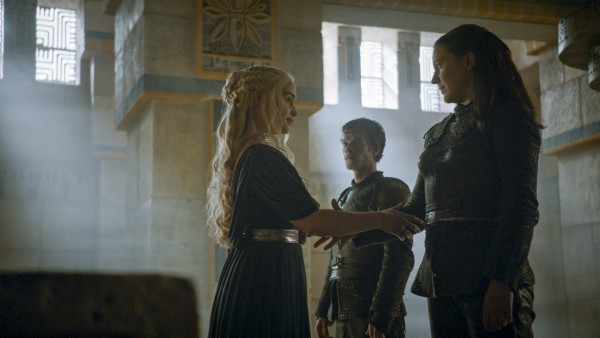 Some of the wheel-spinning from the past couple of episodes of Game of Thrones did lead to an awkward sense of some storylines crashing together and resolving themselves a bit quickly this week, but there’s still no denying that, “Battle of the Bastards” is an especially excellent episode, and definitely one of this series’ best overall, let alone this season’s! The final battle for Winterfell didn’t disappoint in the slightest, and Essos finally saw some much-needed forward movement with Daenerys dealing a final deathblow to the forces of the masters, and forming an alliance with Yara and Theon for her rapidly-approaching campaign to take Westeros and the Iron Throne. We’ll see if next week’s season finale can continue to make some of Season Six’s recent story slogs entirely worth it, but it’s incredibly satisfying to not only see Game of Thrones find itself again this week, but firmly remind us why there’s currently no other show on television that is as grand or as powerful as this one!

Game of Thrones 6.9: "Battle of the Bastards" Review
Game of Thrones delivered one of the best episodes in its entire history this week, as the long battle for Winterfell reaches a violent climax, and Daenerys asserts a powerful new claim on both Essos and Westeros.
THE GOOD STUFF
2016-06-22
98%Overall Score
Reader Rating: (0 Votes)
0%