Most of this week’s episode of Preacher, “Monster Swamp”, felt like it was largely built around properly connecting Odin Quincannon to Jesse and the rest of the overarching narrative. The other characters seem to currently be pursuing their own separate storylines for the most part, primarily Tulip, who is simply left to have a rather shocking and embarrassing incident that shows her Cassidy’s true nature, but the interplay between the Custer and Quincannon family history still made for an episode that effectively hit all of the weird and intriguing notes that this show has largely done very well.

Another big part of this episode was seeing flashback sequences that delved a bit more into Jesse’s history with his father, who is played in a guest role by Gotham’s Nathan Darrow, giving us a proper look at him beyond his mysterious death before Jesse’s eyes. Jesse’s father appeared to have been a more successful and charismatic preacher than Jesse himself is, with Jesse appearing to chase his father’s legacy in the present day. An especially pivotal moment was had when even a preacher as talented as Jesse’s father can’t convert Odin Quincannon to becoming a Christian as well. 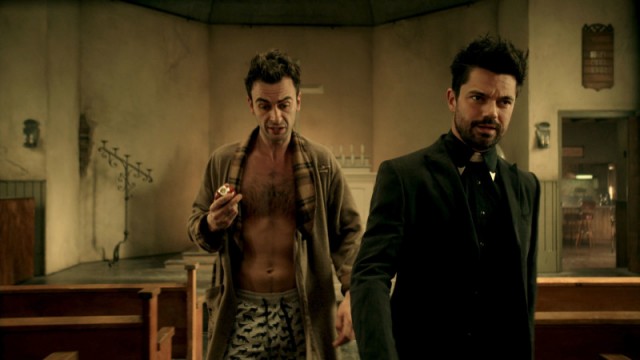 Odin was also tied into another big plot element this week, when the patrons of the whorehouse that Tulip is currently lodging in begin chasing the women around with paintball guns (don’t ask, it’s Preacher), and one of them falls into what Tulip describes as a, “Bottomless shit pit.” Naturally, this causes a bit of a problem for Odin, whose company is apparently responsible for these sinkholes, though Odin simply dismisses the situation by saying that people should watch where they’re going, and leaves it at that. Succinct… And unhelpful.

The character work with Odin, and just how unrepentant and twisted he really is, effectively came into focus this week. This episode seemed to build up the seediness of the show’s world in general, but Odin especially really took the lion’s share of focus, as he balks at any attempt to use his power and wealth to truly make his town better. Despite that, even the mayor seems to be terrified of Odin, especially after a green proposal is responded to by Odin urinating into the guy’s briefcase, and he just sort of takes it. Granted, Jackie Earle Haley is a pretty imposing guy, but even then, you know that Odin is bad news when even the town’s mayor doesn’t dare screw with him, even at the cost of a perfectly good briefcase! 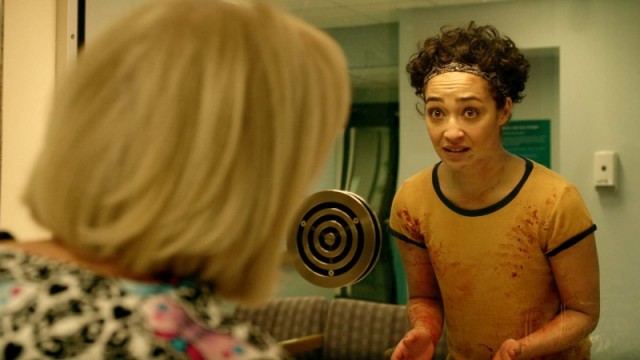 Speaking of the good mayor, he’s apparently babysitting Emily’s kids, and hooking up with her. This isn’t really a part of the main storyline, but it’s interesting, and could set up some solid plot developments for later. Emily seems to be the most grounded element of what’s otherwise a pretty outlandish show, so these little reminders that Preacher is supposed to be taking place in our modern world aren’t really unwelcome. It’s just as well too, since poor Mayor Person lost that really great briefcase to Odin’s urination. He could probably use the love, even if Emily doesn’t seem to have any interest in commitment.

The other big thrust of Odin’s development in this storyline, beyond pissing into the mayor’s briefcase and vexing Jesse’s father, is to show a personal connection with Jesse himself. Jesse and Odin apparently paint some sort of war model together, and Jesse uses the opportunity to try and convince Odin to come to church. Jesse naturally wants to use the power he has to help his struggling ministry, and eventually manages to pack the church, with Odin in tow, after promising Odin his father’s land, and promising to raffle off a big 4K TV to one of the church’s patrons. Jesse then uses his charismatic Word of God powers to immediately convert Odin before the entire town. That will surely have some bad fallout later, but it’s also a great testament to just how powerful the Word of God really is, and how even the most mighty of people are helpless to resist Jesse’s commands now. 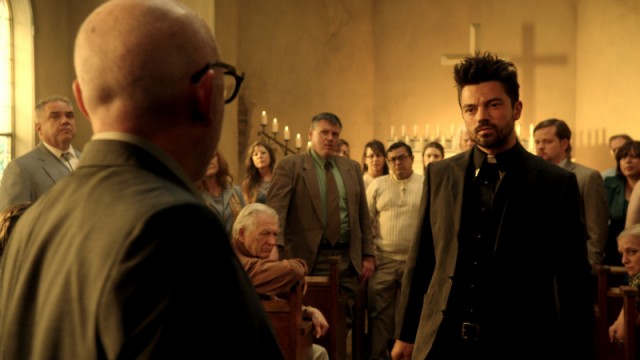 Beyond this, there was a bit of subplot material, even if one of the subplots simply had DeBlanc and Fiore literally avoiding the call of Heaven, confirming that they shouldn’t be on Earth. Cassidy tricks the angels into giving him money, which he promptly blows on hookers and drugs, though this leads to him getting banged up and tossed out a window by Tulip, who mistakes him for an asshole patron that she especially dislikes at the whorehouse. When Tulip rushes Cassidy to the hospital and makes a fuss, she eventually discovers Cassidy healing himself in the blood storage area, and that’s where she learns about his vampirism. That’s more than a little uncomfortable, but it was quite funny. It was also funny to see DeBlanc and Fiore continue to just wait patiently for the chance to cut Jesse open with a chainsaw and fish out Genesis. The episode ending with their divine phone calling them was a nicely fitting cliffhanger for next week too.

Preacher focused its offbeat storytelling especially well this week, and this made for lots of interesting material, especially with Jesse and Odin. The little subplots with Emily, Tulip, Cassidy, DeBlanc and Fiore also worked pretty well, and the episode didn’t have much in the way of clear weaknesses. Sure, one could complain about characters like Emily and Tulip being too disconnected from the main goings-on, but at least these world-building moments are happening in places when these characters aren’t urgently in demand to further the rest of the show’s storyline, which makes them more welcome than similarly disconnected moments in AMC shows like Fear the Walking Dead, and even this past season of Better Call Saul. Maybe the unique style of Preacher just lends itself better to these little side stories, but in any case, the great writing and performances, even in seemingly irrelevant story scenarios, continue to highlight why Preacher is one of Vertigo’s especially fantastic television adaptations.