Last week’s stellar episode is a very tough act to follow, but somehow, “The Winds of Winter” provided an equally shocking, dramatic and satisfying season finale for Game of Thrones this week, one that capped off Season Six with a huge amount of anticipation for what comes next! Winter is here, and that means that old enemies are eliminated and new alliances are forged, as the greatest threat to Westeros looms for Season Seven next year!

After the big battle in the North, many of the plot arcs, true to this show’s own eccentric form, dealt with quieter, more low-key plots that foreshadow the upcoming season of the following year, rather than go into more spectacle to cap off the season, as many genre shows do. The only exception was the big plot in King’s Landing, which up-ended the show in an enormous way, especially in how surprisingly cleanly it managed to resolve the lingering issues of the Order of the Sparrow, the Tyrell siblings, and even Tommen as an unfit king. 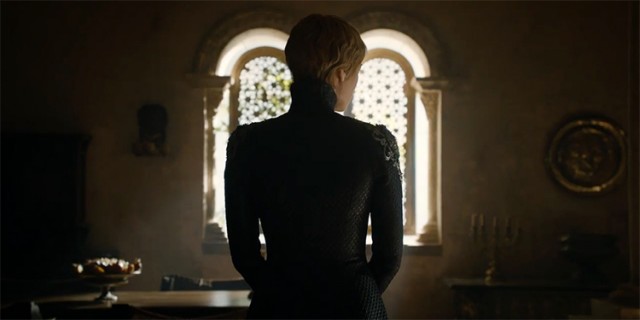 Remember when Olenna Tyrell quips to Cersei that she can’t possibly expect to kill all of her enemies in one fell swoop earlier in the season? Well, turns out, Cersei does exactly that. No, seriously. This was extremely clever, as it goes back to referencing something that was whispered about since the very first season of Game of Thrones in 2011; There’s Wildfire underneath the city. After a rather dramatic trial for Loras Tyrell, who surprisingly renounces his name and claims to Highgarden, Cersei is nowhere to be seen, with Tommen also barred from attending the trial. Once Margaery realizes that Cersei’s absence is a bad omen, it’s too late, something also discovered by Lancel, after he chases a vagrant spy child under the city, gets stabbed, and is left to crawl up to the Wildfire, just as soon as it explodes! BOOM! Just like that, everyone inside the Sept is incinerated; The High Septon, Margaery and Loras, the entire Faith Militant, Lancel, and pretty much everyone else that was conspiring against Cersei. They’re all killed. Wow.

This was a brilliant and very surprising turn of events, and one that could have come off as a contrivance, but actually made a lot of sense, especially considering how ruthless Cersei has often been in the past! Cersei even captures Septa Unella, leaving her to be slowly tortured to death by The Mountain, pretty much placing her on top for the end of Season Six! It’s not a universal victory however, as Tommen, who learns of Margaery’s death second-hand from his chamber, ends up falling out his window and committing suicide, meaning that Cersei has lost the last of her children. Appropriately though, the show didn’t dwell on that. Instead, it took the next logical course of action; Placing Cersei herself on the Iron Throne! Even Jaime looks very concerned about this, having rode back from Riverrun just in time to see Cersei get crowned, and now that the one element that humanized Cersei is completely gone, Cersei is officially more dangerous than she’s ever been! Now, all of Westeros will likely suffer her wrath in the coming season! 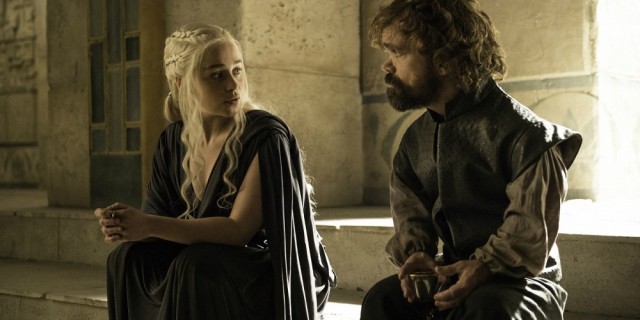 Even if the biggest moment in the season finale unfolded from Cersei’s arc in King’s Landing however, there were no shortage of promising developments with the other characters, even if some were only seen in passing. The most concise arc belonged to Arya, who briefly appears, surprisingly crossing paths with Bronn and Jaime shortly before they return to King’s Landing as well! Despite fleeing Braavos, Arya still seems to have the power of the Many-Faced God, as she disguises herself as a handmaiden to Walder Frey, right before serving Walder’s sons to him in a pie. That’s not all either, as Arya reveals herself, and then takes satisfying revenge for the Red Wedding, slitting Walder Frey’s throat, and smiling as he bleeds out under her. Whoa. Arya has always been courageous and bold, but she’s downright frosty in this scene! Do we have to worry about her? Arya may be a Stark, but there’s a lot of sick satisfaction in her eyes when she murders Walder. Sure, it’s justified, but this could be a very slippery slope…

Another fairly brief arc was that of Bran, who heard from Benjen all about the coming battle off-screen. Benjen leaves Bran and Meera after preparing them for what’s to come, stating that he can’t follow Bran where he needs to go next. Bran is the new Three-Eyed Raven now, and he ends his story for this season by embracing his power, and beginning his transformation into one of the guardian forces of Westeros. Bran does get one major first use out of his abilities too, as he completes the backstory at the Tower of Joy, and, confirms what many fans of the show and source novels already guessed; Jon Snow is not Ned Stark’s son. He’s actually the son of Lyanna Stark, Ned’s late sister, who was revealed to have died in childbirth. Jon’s father is currently unknown, though it’s strongly implied that Lyanna was forcibly impregnated, and begs Ned to hide the secret of Jon’s parentage. This is why Ned falsely claimed that he conceived Jon himself with some unknown whore, as it was Lyanna’s dying wish. Again, it’s not confirmed that Jon’s father is Rhaegar Targaryen at this point, as the fan theory that correctly pegged him as Lyanna Stark’s son claims, but the question of Jon’s father is something that’s sure to come up again in Season Seven. 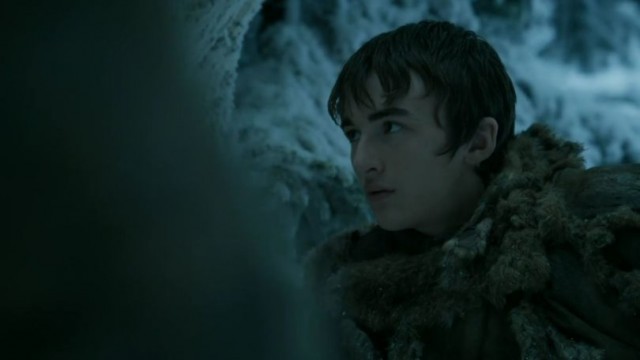 Further adding credence to this direction is what happens next at Winterfell, now that Ramsay is dead, House Bolton is destroyed, and both Jon and Sansa have taken back their home. Sansa, unsurprisingly, learns that Littlefinger was motivated to save Winterfell to try and snag Sansa’s hand in marriage, which Sansa seems to spurn, though that’s not the interesting part. The interesting part is when Jon rallies his remaining forces, including the lords, and tries to warn them of the coming of the White Walkers. With some help from Lyanna Mormont (man, she’s awesome!), the lords and soldiers eventually declare Jon the new King in the North, in a scene that eerily echoes the declaration of the late Robb Stark as King of the North several seasons back. This is very clever, especially as Sansa and Littlefinger both appear to be unhappy with the declaration. Jon is likely the one most fit to rule Winterfell at this point, but could his new claim inadvertently lead to trouble later? Given that Davos discovered the evidence of Shireen being sacrificed to the Lord of Light last week, and Jon banishing Melisandre from Winterfell as a result, there’s no resurrecting Jon if he’s killed again. Will he ultimately survive next season? Probably, since killing him again would not have the proper dramatic impact, but still, it’s unnerving to see Jon lose one of his major safety nets…

Finally, over in Essos, Daenerys prepares to embark on her great journey, with Tyrion, Varys and Missandei in tow. Daenerys is sadly forced to leave Daario behind in Meereen, to rule over the city and help keep the peace, now that the masters are all dead, but as Tyrion states off-screen, it makes sense to abandon Daario, as he will be a liability, since Daenerys needs to be open to marrying in order to further consolidate her power in Westeros. Varys even branches off to ensure the support of Dorne, who is finally coming back into play at the end of the season, and who now, alongside Theon and Yara Greyjoy, have allied with Daenerys and her campaign to take Westeros. It’s a moment we’ve been waiting for since the start of the series, but finally, Daenerys’ arc ends as she sails on a fleet of ships to Westeros, alongside the Dothraki, the Unsullied, and her remaining allies. Season Seven will finally see Daenerys make good on her plans for Westeros, and the fact that the episode ends on this note could not possibly have been better conceived! 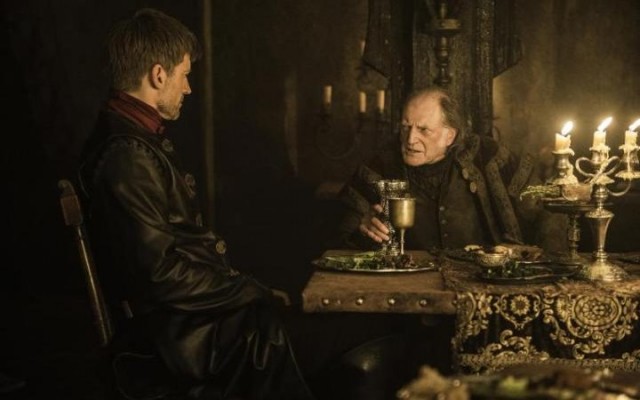 The remaining small development in the episode is Samwell Tarly and Gilly reaching Oldtown, and Sam beginning his training to become a Maester, which comes just in time for the announcement by the Citadel that Winter has arrived for Westeros. Fittingly, “The Winds of Winter” placed the surviving pieces of Westeros’ forces, including the soon-arriving Daenerys and co. from Essos, in the necessary positions to start preparing for the big, climactic battle of this show. It’s hard to believe that there’s a yet greater threat on the horizon, as Cersei sits upon the Iron Throne, Daenerys approaches the continent with a worthy force behind her, and Jon Snow is declared King in the North, for better or for worse, but the Night King is a force that puts even these powerful players to shame. The great game may rage on, and it’s truly been fun, but when Season Seven begins next year, the board is going to be upturned, and no one will be safe! If the promise of this excellent season finale holds, next year’s seventh season should be the most exciting yet!