Preacher got particularly great last week with the superb, “Monster Swamp”, but this week’s episode, “South Will Rise Again” didn’t quite capture that same momentum. The show leaned very heavily on its horror elements more than anything else this week, which is fine and good, but it also makes for less eccentric entertainment value if you’re coming to Preacher for reasons beyond finding new, twisted ways to be horrified.

The episode begins with another peek at the backstory of the Saint of Killers, a character that the TV show still hasn’t even so much as explicitly identified, even though fans of the Vertigo source comics will immediately recognize this guy. The look at the Saint of Killers continues to provide some mild intrigue, as we see him wandering a savage little town in the Old West, seemingly devoid of sense or morals, but just like our last peek at the Saint of Killers a couple of weeks back, there’s just too little context here. The show needs to start better tying the Saint of Killers into the main story, since, for now, he just feels like a random aside that eats up screentime. 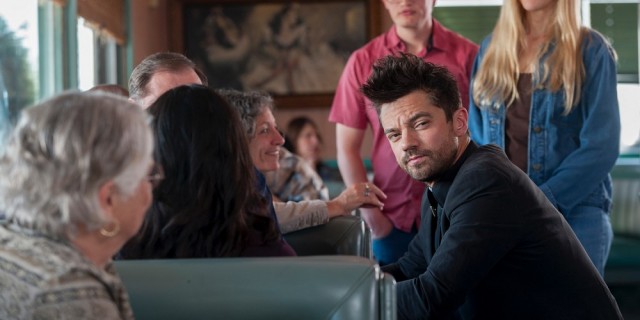 Back in the present day, Tulip is continuing to express exasperation at her mission to recruit Jesse for her revenge mission, but beforehand, she’s got plenty of questions about Cassidy’s taste for blood. We saw disappointingly little of Cassidy this week, though as usual, he and Tulip remain two of the show’s most entertaining characters, even in a drearier episode that’s a bit less fun. The interplay between Tulip and Cassidy as Tulip grills Cassidy about how his vampirism works made for some welcome levity at least, but beyond a very awkward sex scene between the two that comes later, not much is really done with the increasingly bizarre accidental relationship between Tulip and Cassidy at this point.

At least Tulip is still an overall bright spot though. As Jesse continues to exploit his new abilities by inspiring the townsfolk, even if it’s against their free will, Tulip coming in and recounting Jesse’s backstory as a, “Bad boy”, referencing a specific incident where he shot a komodo dragon in the face, was sickly humourous. It was also pretty amusing to have Tulip barge in on Emily while she’s on the toilet, politely ask for Jesse, and then leave. This kind of single-minded insanity is a great part of Tulip’s character, especially when it plays so well into the overall eccentric tone of this show as a whole. 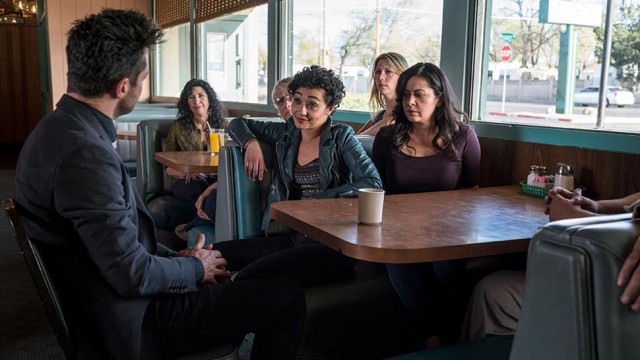 A big part of this episode was all about raising questions regarding Jesse’s abilities though, especially as DeBlanc and Fiore spend yet another episode being afraid of their heavenly telephone. Again, there were some amusing exchanges between these two angels, and it’s welcome to have them finally confront Jesse in a diner, and tell them that it’s not God Himself who dwells within the local preacher, but they spent yet another episode not even leaving their hotel room, beyond said diner scene. I guess there’s only so much you can do with two characters whose sole purpose is to find Jesse and convince him to let them cut him open with a chainsaw, but even so, it’s a shame that DeBlanc and Fiore aren’t more meaningfully interacting with the human world.

Among its strengths, this episode did at least add a lot of effective mystery to Genesis, which fans of the source comics would be able to point out as the source of Jesse’s abilities, even if those only watching the TV show will be scratching their head at just what has empowered the preacher. The good was shown of Jesse’s powers, as he tries to use his power to improve the quality of life for the town’s citizens, inspiring them to do good, and even convincing younger people to embrace The Bible wholeheartedly. This especially came into focus with Eugene Root/Arseface, who played a bigger role in this episode, as he becomes harassed by locals about, “Finishing the job”, specifically by fully committing suicide with the shotgun that disfigured him. Jesse uses his powers to make Tracy Loach’s mother forgive Eugene though, and even seems to get the town off him, at least for now. It’s a positive step, especially since Eugene really doesn’t seem like the kind of person that deserves such derision, despite his appearance.

The bad was also shown however, once again courtesy of Odin Quincannon, which might invite a fair bit of controversy toward Jesse’s new talents. Obviously, Donny already doubts Jesse’s good intentions, being fully aware of his persuasive abilities in a very harsh way, but it was Odin that fully cemented what can go wrong, should Jesse get too liberal with powers that he, nor any other mortal person, should not possess. Odin does seem to be fully ready to embrace God in this episode, as Jesse commanded him, and even makes peace with Mayor Person, before inviting the green group into his office to hear them out. Right as the meeting is about to start however, Odin grabs a shotgun and kills all of the representatives! Wait, what?! Cryptically stating that the company must grow or die, this begs a ton of questions about Odin’s actions, and made for one of the episode’s best, and most shocking scenes. Did Jesse’s command not work on Odin? Does Odin think he is serving God in some twisted way by killing those reps? Do Jesse’s commands eventually wear off?

Whatever the case, Preacher did right by the promise of Genesis, and what it may mean for Jesse and his situation going forward, even if some of the fun factor was lost this week. Still, “South Will Rise Again” will hold your attention, and keep you anticipating what’s next. The character arcs were a little uneven this week, but at least standouts like Tulip and Odin are still shining as bright as ever. It seemed like only a matter of time before the potential drawbacks surrounding Jesse’s abilities would come to light, but hopefully, he doesn’t leave Annville in worse condition than he found it!

Preacher 1.5: "South Will Rise Again" Review
Preacher was a tad more uneven this week, but still delivered plenty of appealing character moments, especially when it starts to become apparent that Jesse's abilities may come with some big caveats.
THE GOOD STUFF
THE NOT-SO-GOOD STUFF
2016-06-27
78%Overall Score
Reader Rating: (0 Votes)
0%