If you weren’t aware, this year marks the fifteenth anniversary of Square Enix’s series of Mana action-RPG’s. In fact, today, June 28th, is the release date of the series’ original game in Japan, where it first launched for Game Boy! Of course, we in the West know that game as Final Fantasy Adventure, which arrived in North America on the following November, even if the Mana series fully came to prominence worldwide, and subsequently broke away from its initial billing as a Final Fantasy spin-off, with 1993’s Super NES sequel, Secret of Mana.

For nostalgic RPG fans however, Square Enix has a special surprise, to commemorate the original release of Final Fantasy Adventure. Apparently, the company has been secretly working on an updated PlayStation Vita remake of Final Fantasy Adventure, one based on the same code and assets of the remake released for iOS and Android devices earlier this year, and, despite the game not being listed among Sony’s PlayStation Store releases for this week beforehand, Square Enix has surprise-released the PlayStation Vita remake today! Previously, Square Enix claimed they were, “Considering” a PlayStation Vita release for the remake, but would not commit to one. It costs $13.99, strangely being a dollar cheaper than many smaller-scale PlayStation Vita games on the PlayStation Store, and obviously swaps out the touch-only controls of the mobile game with the ability to play with traditional buttons, on top of adding trophies to earn.

The remake, dubbed ‘Adventures of Mana‘, re-imagines the original action-RPG adventure that started it all in 1991, as players take control of a gladiator, whom they can rename (his default name is ‘Sumo’), one that ends up in conflict with his former master, the Dark Lord of Glaive, on a quest to unlock the power of a mysterious heroine, who can also be renamed (her default name is ‘Fuji’). The game maintains the action-RPG gameplay of the original, and redesigns it with improved physics, visuals and gameplay, along with updated dialogue, and a remastered soundtrack, though players have the option to change the music to be the original Game Boy tunes, if they so desire. 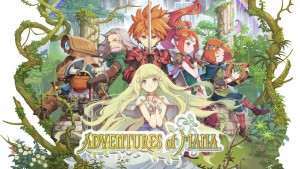 Also of interest is that this is the second remake of Final Fantasy Adventure that Square Enix has made. A previous remake, Sword of Mana, was released for Game Boy Advance in 2003, which even more heavily overhauled the presentation and gameplay, along with making the heroine playable in a separate campaign. This remake was still received fairly well, though some criticized it for being too far removed from the original Game Boy game, and overly simplified. It’s likely that Adventures of Mana desires to be a more true remake that is more faithful to its inspiration.

Keep questing to Eggplante for all major news and updates on the Mana games.