There’s been tons of rumours surrounding the existence of a current-gen remaster collection for 2K Games’ BioShock series throughout this year, and today, 2K finally made the rumblings official! BioShock: The Collection is indeed in development for PC, PlayStation 4 and Xbox One, and will release for $59.99 USD/$79.99 CDN on September 13th of this year. The remaster collection will primarily be developed by Blind Squirrel Games, a frequent 2K collaborator who contributed to the development of Borderlands 2, XCOM: Enemy Unknown, Evolve, and the original release of BioShock Infinite, along with assisting with some facets of Microsoft’s Sunset Overdrive and Disney Interactive’s Disney Infinity 3.0. 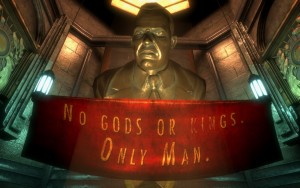 The package will naturally include all three BioShock games, those being 2007’s original BioShock, 2010’s BioShock 2, and 2013’s BioShock Infinite, now remastered in native 1080p resolution and running at a full 60fps framerate on all three platforms. All three games will also come with every bit of DLC released for them, including the formerly PlayStation-exclusive Challenge Rooms and formerly Ultimate Rapture Edition-exclusive scrapped concept showcase in BioShock, as well as an all-new directors’ commentary video narrated by series creator, Ken Levine and lead animator, Shawn Robertson. BioShock 2 will come with its challenge-based DLC, The Protector Trials and story-based DLC, Minerva’s Den. Finally, BioShock Infinite will come complete with challenge-based DLC, Clash in the Clouds, as well as the two-part story DLC, Burial at Sea, in its entirety, and will even include the Columbia’s Finest pack of bonus weapons and gear, free of charge.

BioShock: The Collection will mark the first time that these highly beloved sci-fi/horror first-person shooters will be available in one package, as well as the first time that the BioShock series has made the leap to PlayStation 4 and Xbox One. The collection will come with a couple of small caveats that would-be purchasers should be aware of though!

First, and predictably, BioShock 2’s online multiplayer suite will be omitted from the remaster, and only the game’s main single-player element will be present. Obviously, this is irrelevant in the case of BioShock and BioShock Infinite however, as those games were single-player-only to begin with, a rarity for modern first-person shooters.

Secondly, while BioShock and BioShock 2 will receive technical touch-ups in the remaster’s PC edition, BioShock Infinite will be left alone, and presented exactly as it’s already offered on the PC platform since its initial release in 2013. This is because BioShock Infinite is already able to easily reach parity with the current generation of consoles on its high-end settings, including achieving a PC-exclusive 1080p resolution setting and 60fps framerate setting, and thus, the game doesn’t really require any more upgrades. Obviously though, BioShock Infinite will receive upgrades to bump it up to native 1080p resolution and a 60fps framerate on PlayStation 4 and Xbox One, since the original Xbox 360 and PlayStation 3 releases of the game are restricted to native 720p resolution and 30fps performance. It’s also likely that the optional PlayStation Move controller support in BioShock Infinite’s PlayStation 3 port will not be featured in the remaster’s PlayStation 4 edition.

Keep exploring Eggplante for all major news and updates on BioShock.