Sony has quickly followed up on yesterday’s Microsoft announcement of the free Games with Gold rewards we can expect on Xbox platforms next month, by officially confirming which six free games will be offered to PlayStation Plus members throughout July. Saints Row: Gat Out of Hell and all-new release, Furi are headlining the selection as the PlayStation 4 freebies, while those who still have their PlayStation 3 hooked up can enjoy free downloads of Call of Juarez: Bound in Blood and Fat Princess, and PlayStation Vita owners can redeem Oreshika: Tainted Bloodlines and a PlayStation Portable game, Prince of Persia: Revelations. 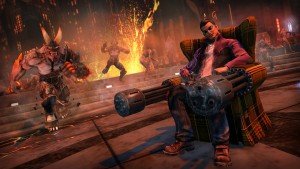 The new PlayStation Plus games go live this upcoming Tuesday, July 5th. Thus, if you have yet to redeem NBA 2K16, Gone Home: Console Edition, Echochrome, Siren: Blood Curse, God of War: Chains of Olympus or Little Deviants, you have until then to do so, before they return to their original paid pricing for PlayStation Plus members. As usual, you must have and maintain an active PlayStation Plus membership to redeem and play any free game rewards at any time, on any platform. As an additional note, PlayStation Plus members will also get exclusive early access to Epic Games’ upcoming MOBA, Paragon on PlayStation 4 this month, ahead of the open beta release on August 16th, as well as an exclusive Starter Pack that contains three Master Challenges. 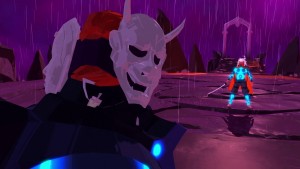 Saints Row: Gat Out of Hell is a standalone expansion to hilarious, zany open-world sandbox game, Saints Row IV. After the main events of Saints Row IV, the Third Street Saints celebrate the birthday of their fearless leader, leading to a botched turn on a ouija board that has the Saints’ leader whisked to Hell in order to marry Satan’s daughter. Saints members, Johnny Gat and Kinzie Kensington pursue The Boss into Hell, and undertake a series of eccentric challenges as they try to enact their airtight plan of shooting The Devil in the face, and taking back their leader. Our official review of the game gave it a 70% overall score, where we praised its huge array of activities and brilliant concept, even if we took issue with its brevity and over-emphasis on side missions. Saints Row: Gat Out of Hell is also available for PC, Xbox One, Xbox 360, and PlayStation 3. 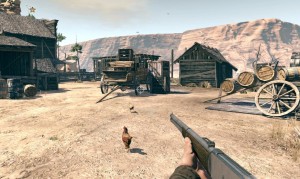 Furi is an all-new independent game, developed by The Game Bakers, and one releasing for the first time on July 5th. It’s a fast-paced, challenging hack-and-slash game that pits players in one-on-one combat against very dangerous bosses! Players are tasked with besting their increasingly more intimidating opponents, in an effort to reach The Jailer and destroy him, thus ensuring their path to freedom. Aside from PlayStation 4, Furi will also release for PC.

Fat Princess stands as one of Sony’s top surprise hit IP’s of the previous hardware generation. A team-based game that blends action and real-time strategy, players must try to rescue their princess and bring her back to their stronghold. There’s a twist however, as players can gorge the princess on cake to make her fatter, which makes her more difficult to move, but also more difficult for opponents to snatch back to their own base. Fat Princess received good reviews when it first launched in 2009, eventually also seeing a port on the PlayStation Portable in response to the positive reception. The game was praised for its creativity and addictive, multiplayer-focused fun, though some took issue with its depiction of satirizing overweight women.

Oreshika: Tainted Bloodlines is a PlayStation Vita-exclusive sequel to a unique RPG that was only released in Japan (roughly translated to “Over My Dead Body”), and comprises a cursed lineage of heroes that all die within two years. As players fight enemies and accrue points, they can use the leftover energy from enemies to beget new children, and try to pursue on with their quickly-dying forces. Players’ forces can develop unique skills, with eight potential job classes assigned to heroes, and the game even uses the handheld’s camera as a means of incorporating the player’s face into the game as well. Oreshika: Tainted Bloodlines received positive reviews when it released in North America last year, with critics praising its unique, captivating gameplay and breathtaking visual style. 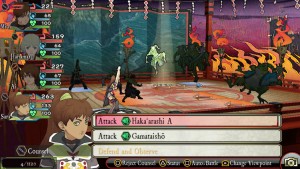 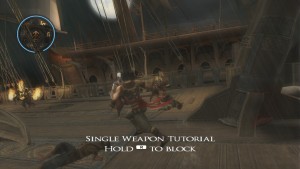 Like the Games with Gold selection that’s set to tide Xbox gamers over during the slow, dreary game release schedule of July, next month’s PlayStation Plus game selection is pretty strong in quality. Saints Row: Gat Out of Hell, despite being a smaller, lesser Saints Row game, is a lot of fun, and Furi looks to be shaping up very nicely as a new indie release that will be given free to PlayStation Plus members that own a PlayStation 4. Call of Juarez: Bound in Blood and Fat Princess are both very respectable hits from the PlayStation 3 catalogue, especially for free, and Oreshika: Tainted Bloodlines is one of the best PlayStation Vita freebies to come along in quite a while! Prince of Persia: Revelations is a bit of a lesser reward, especially being a downscaled PlayStation Portable game, and a port of a heavily-contested console game at that, but the game is still one of the better third-party productions made for PlayStation Portable, respectable for its ambition, if nothing else.