NOTE: Some minor spoilers from the second season of “Marco Polo” are present in this review. With that said, the review is written to accommodate those who have not yet seen the season, and as such, will avoid discussion of major plot developments.

When Marco Polo’s first season debuted on Netflix at the very end of 2014, it was received fairly well by subscribers (much less so by critics), but definitely had lots of room for improvement. I was ambivalent about the first season myself, enjoying some of the great performances and impressive production values, though a lot of the writing was pretty problematic, as was the show transparently trying to grab the Game of Thrones audience, without fully grasping what makes Game of Thrones so popular. Whatever the case though, the quality was present enough to snag Marco Polo a quick renewal for Season Two, even if it’s been over a year’s wait for said second season to arrive.

Shifting the show away from the Holiday season and into a Summer release, Marco Polo’s second season also tested some re-tooled waters in last year’s Holiday Netflix short, Marco Polo: One-Hundred Eyes, spotlighting the titular supporting character in a pretty enjoyable half-hour origin story of sorts, and one that ended with the announcement of when we could expect Marco Polo’s second season to arrive in the following July. Like BoJack Horseman, another Netflix show that tried the same Holiday short tactic after a flawed debut season, Marco Polo also has undeniably improved in Season Two, though not to the same startling degree that BoJack Horseman did between its first and second seasons. If you were frustrated at Season One, but still overall enjoyed the series’ concept though, you’re fortunately in for a smoother, more enjoyable ride in Season Two. 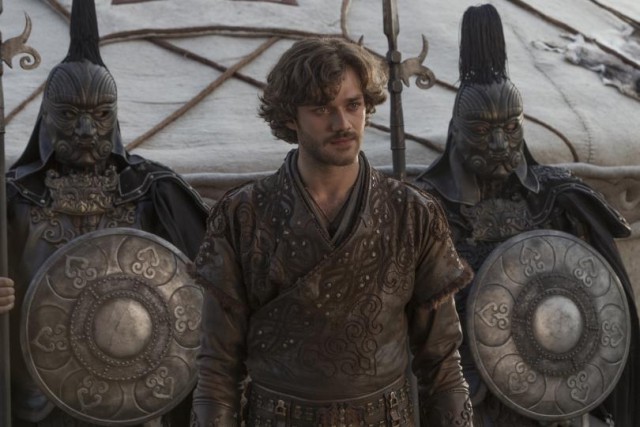 One thing that’s immediately fixed out of the gate in this new helping of ten episodes is the decreased emphasis on Marco himself in Season Two. Lorenzo Richelmy still isn’t given much more to work with beyond reacting to the exotic, intriguing world around him, as much as the show still tries to involve him in the battles and backstabbings of Kublai Khan’s world. The title now feels a bit misleading as a result, but the second season of Marco Polo makes the series more about the whole ensemble than primarily centering on Marco himself, and that works to the show’s benefit. When it comes down to it, most of the show’s other characters are noticeably more interesting than Marco.

Benedict Wong remains one of the biggest standouts in the cast as Kublai Khan, a man that can effectively come off as tyrannical and sympathetic between scenes, without ever missing a beat. That becomes more true than ever this season, as Kublai is yet again pitted against his own blood, when his exiled cousin, Kaidu, once again played by Rick Yune, publicly challenges him for the Khanate. This feud founds most of the season, with perspectives moving between Kublai’s forces and Kaidu’s forces, more so than simply revolving around Kublai’s own city. This is another change that works well, and continues to find ways to push the scope of the series, even after the Song Dynasty was almost entirely wiped out with the death of Jia Sidao at the end of last season. 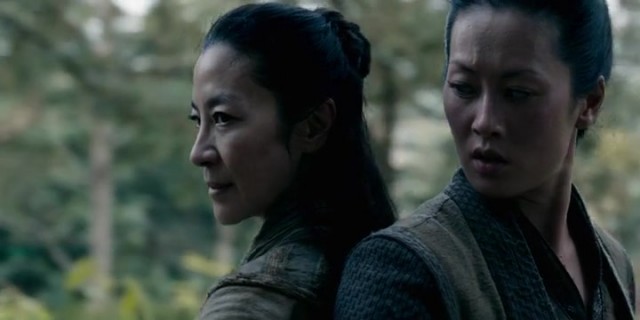 Also building from last season is the shift of Ahmad, Kublai’s trusted advisor, from a hero to a villain. The end of last season revealed Ahmad as a traitor that is secretly manipulating events to try and seize the Mongol throne, and the way that Season Two continues to explore this deviousness is very effective. It also provides a great way to keep another of this show’s best characters, Olivia Cheng’s Mei Lin, firmly in the ensemble, despite the Song Dynasty being wiped out, as she’s made a pawn of Ahmad under threat of her captive daughter. Mei Lin doesn’t really participate in nearly as many action scenes this season, disappointingly, especially after the very impressive nude fight scene that she pulled off around the start of Season One, but her character is still good, and she still provides a nice neutral party to root for simply on the basis of being cool and likable, beyond the central conflict between Kublai and Kaidu, and their loyalists.

Kaidu is hardly the only obstacle in the way of Kublai’s claim to the throne though. This season also establishes the growing Christian forces as opposers to Kublai’s reign, fresh off of The Crusades of the 13th Century, who stand as the wave of the future that provides an enemy to Kublai beyond his personal squabbles. The Christians largely seem to exist as a tease for a potential Season Three, since they don’t ever really actively join the battles of Season Two, but they do provide a decent way to better tie Marco Polo into its time period, making it feel a bit more grounded and a bit less fantastical. This more grounded direction hurts some of the spectacle, but never to the point of completely crippling the production values or action, both of which remain pretty fantastic overall in Season Two. This re-tooled direction also nicely re-focuses the series’ storytelling very well, on top of shedding a lot of the obvious attempts to knock off Game of Thrones, which helps Marco Polo better stand as its own confident series, rather than a passionless project that’s trying to chase the popularity of HBO’s epic fantasy darling. 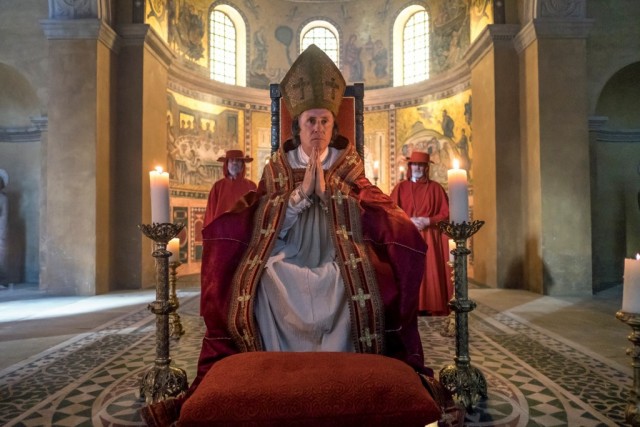 Another new threat, and one that also ties a bit into the fallout from both Season One and the Hundred Eyes short is Lotus, played by Michelle Yeoh. Lotus has a very cool history with Hundred Eyes, who spends most of this season providing wisdom more than action, but Hundred Eyes’ scenes with Lotus mark some of the season’s best dialogue exchanges, and some of the points where Marco Polo is at its most complex and unpredictable. This will also continue to make you wish that the show had been about Hundred Eyes instead, which was a feeling that some of Season One also gave off. If Marco Polo doesn’t get a third season, or even if it does, can this character eventually have a spin-off? That said, a lot of the appealing new material with Hundred Eyes’ history is also due to Lotus being a very cool new character, and one that feels like a neat throwback to Yeoh’s history as an alum of Crouching Tiger, Hidden Dragon.

As much as Season Two of Marco Polo fixes a good chunk of the shortcomings from Season One though, the season still has some flaws, and still doesn’t ultimately elevate the show above being a Netflix Original Series that’s merely solid, rather than truly great. One returning character that particularly suffers is Kokachin, who is given a weird seasonal story arc that starts out fine, but quickly flies off the rails of credibility. The idea of Kokachin being forced to produce an heir for Prince Jingim, Kublai’s son whom she doesn’t truly love, is good, especially since Empress Chabi makes herself a big part of that storyline in some ways that are both heartwarming and horrifying. The problem comes in when the show quickly becomes confused about how to best make use of Kokachin’s newfound connection to Chabi, with much of the season having Kokachin inexplicably mentally deteriorate, to the point where she starts hallucinating about the real Blue Princess, who died long ago. This is a far cry from the fun, flirty character that Kokachin used to be in Season One, and she marks the one character that seems to have downgraded in Season Two, unfortunately. 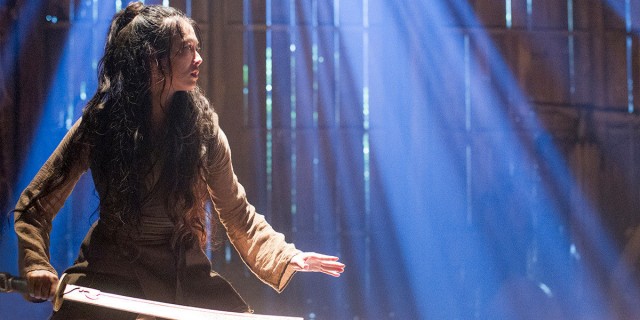 Another drawback to Season Two of Marco Polo is that, while the storytelling is effectively streamlined and made more credible and interesting, the backbone of the season’s events still unfold as a pretty by-the-numbers power struggle. I understand that Netflix probably didn’t want to risk another instance of biting off more than it could chew with a show that has been pretty contested among critics and viewers, but surely, the season could have aimed just a little bit higher than this with its overarching conflict. In a way, Season Two feels like it’s laying a bunch of groundwork for an uncertain Season Three as well, especially with the Christians seeming to make Kaidu, who is supposed to be the season’s big villain, come off as a minor, inconsequential nuisance, while the real threat to Kublai is stirring in the background. Maybe that’s the idea, and I suppose you could also make the case that Ahmad is a big villain too, whose scheming is more unpredictable and engaging than Kaidu’s challenge much of the time, but it’s annoying to have Marco Polo seemingly sitting on far more interesting story developments for another season, which it may or may not be renewed for.

The clear and noticeable improvements to Marco Polo are nonetheless noticeable and appreciated though. If you watched through Season One, and liked it at least a bit, then Season Two is also worth watching, since it’s largely better in most respects. Those who hate or already ignored Marco Polo however won’t find a huge list of improvements to the point of changing their mind. The original spirit of historically inaccurate, but dramatically grand intrigue is still intact in Season Two, only now it’s presented with more class and refinement. If the show manages to be renewed for a third season, and keeps making some of these little, but effective improvements, then Netflix could have another action-themed hit on their hands, to go along with the mega-hit Daredevil series. I’m still rooting for Marco Polo, and the considerably improved second season has shown that my faith is being steadily rewarded.

Marco Polo: Season Two Review
Marco Polo makes some key improvements in its second season, resulting in a tighter, better-presented batch of episodes, even if the series still hasn't shaken all of its flaws.
THE GOOD STUFF
THE NOT-SO-GOOD STUFF
2016-07-07
77%Overall Score
Reader Rating: (0 Votes)
0%