Microsoft had a pretty solid keynote at last month’s E3, but one of the Xbox maker’s more controversial announcements was that all major first-party titles for Xbox One over the foreseeable future will also come out for Windows 10 PC’s, with both versions awarded together as a single cross-buy purchase, as part of the ‘Play Anywhere’ initiative. Some applauded this announcement, but quite a few others voiced concern, or outright discontent towards the idea, especially voicing the lamentation that Microsoft is undermining a core part of the Xbox One ecosystem, that being the console’s exclusives, in order to artificially push Windows 10. 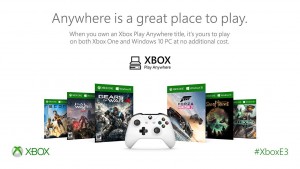 In fairness, it’s difficult to deny how often Microsoft brought up Windows 10 during their E3 conference this year, even when it was billed as an Xbox conference. That, paired with the apparent announcement that the Xbox One would see several upgraded models, further blurring the line between playing on a console and a computer, understandably left a few people worried that Microsoft no longer recognizes the rather large difference between console gamers and PC gamers.

Well, if you’re one of the people that’s a little nervous about the Xbox community having to permanently share high-profile first-party games with PC gamers, you can breathe a small sigh of relief. As reported by The Red Dragon on YouTube, Microsoft has amended their Windows Blog statement about Play Anywhere very recently, to say that, rather than all Xbox One games, only the Xbox One games shown at E3 2016 will definitely also release for Windows 10. It’s a small change, but one that has caused a lot of ripples in the gaming press, suggesting that Microsoft might already be weighing some of the mixed feedback towards Play Anywhere, and might be preparing for the possibility that gamers ultimately reject it.

On paper, Play Anywhere is a good thing. It means that Microsoft can share big upcoming first-party games like Forza Horizon 3, Gears of War 4, Cuphead and Scalebound, among others, with a wider audience, particularly gamers who prefer to play on a computer instead of a console. It also means that Microsoft can effectively future-proof the Xbox platform, in case streaming fully takes over the triple-A game industry, in which case, Microsoft can turn the Xbox platform itself into a digital game streaming app for Windows PC’s. This theoretically negates hurdles like system requirements and DRM for the most part, and removes a ton of barriers that console gamers justifiably cite when people try to persuade them to game on a PC, which would make more sense than a console in a streaming-dominated gaming world.

That said however, some of the early efforts of Play Anywhere from before the initiative’s proper announcement, such as Gears of War: Ultimate Edition and Quantum Break most notably, ended up churning out some pretty shoddy Windows 10 ports, with both of those games looking and animating beautifully on Windows 10, but also being especially buggy, jittery, unstable, and overall poorly-optimized to the PC platform. They were experiences that were clearly designed around the Xbox One hardware, which look as if they were just haphazardly slapped onto Windows 10 without much care put into properly stabilizing them for PC, even if they do have the potential to scale to improved PC hardware, and overtake the beauty and power of their Xbox One counterparts from a raw technical standpoint.

In all probability, the minor pledge change on the Windows Blog is probably just another way for Microsoft to cover their bases, since Play Anywhere could still become a permanent fixture of the Xbox ecosystem, if the market embraces it. That’s certainly possible, though the worry that Microsoft no longer knows the difference between console gamers and PC gamers is a valid one. After all, Microsoft’s game platform restructuring has also been receiving backlash from the other direction, with the PC community complaining that Microsoft’s recent Universal Windows App program for Windows 10 is placing restrictions on games and how they perform and run, on top of denying games certain features on competing PC storefronts like Steam and Origin, essentially treating Windows 10 games as if they’re console games. This essentially means that Microsoft is trying to treat Windows 10 like Xbox One, and Xbox One like Windows 10, considering the whole, “Beyond generations” spiel regarding the Xbox One S and Xbox Scorpio. Oh dear. 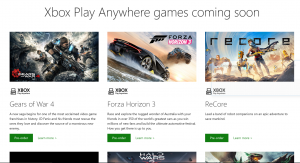 Console gamers trade freedom and ambition in their games for accessibility and comfort, so avid Xbox enthusiasts accept restrictions and pre-set game conditions, but PC gamers are the opposite. PC gamers want uninhibited freedom to craft and tailor their game experience, even if that comes at the price of higher financial costs (offset a bit by frequent PC storefront game sales), managing their own device’s capabilities and power, and a loose gaming community that is expected to police and regulate itself. It could be that Microsoft is finally being reminded of this with Play Anywhere’s mixed reception, hence why it’s re-thinking pushing the program past its currently announced slate of upcoming first-party games. It’s just as well too, because mixing up console gaming sensibilities and PC gaming sensibilities is very dangerous, and has blown up in Microsoft’s face at least twice before in recent years, considering the disastrous Games for Windows Live platform of the previous hardware generation, and the ill-thought-out original DRM-founded vision of the Xbox One from its announcement in 2013.

What do you expect of Play Anywhere? Do you think gamers will appreciate the opportunity to take their favourite Microsoft-published games to their computer and their console? Do you think this pledge is further proof that Microsoft doesn’t understand the difference between console gaming and PC gaming? As usual, your comments are welcome below. Also, don’t forget to revisit Eggplante for all major news and updates on the Xbox One platform.