Preacher delivered another especially superb episode this week in, “He Gone”, which saw Jesse’s dark side become more and more noticeable to those around him. The dark consequences of some of Jesse’s more ill-advised actions beautifully came around this week, particularly regarding the shocking ending of last week’s episode, where Jesse accidentally appeared to send Eugene Root to Hell in a fit of anger.

This episode once again did a very good job of balancing horror and surprising moments of comedy this week, along with creating a brilliant, unsettling edge regarding Jesse’s Genesis-powered abilities. Jesse is a very fascinating protagonist, since he’s a man who wants to do good, yet definitely has a dark side, a pitch black side in fact! Tulip’s not exactly wrong when she plays devil’s advocate about who Jesse really is deep down, and the way that Jesse seems to struggle with being corrupted by his own power has been very intriguing to watch, especially when Cassidy and Emily are starting to witness exactly what is becoming twisted about the local preacher.

Another smart choice in this episode came from showing off more of the backstory of Jesse as a child, in turn revealing that he goes quite a ways back with Tulip. The ten-year-old Jesse and Tulip are shown getting in trouble at school, with Tulip even going home with the Custer family because her aunt is in jail and her uncle is drunk. Seeing the drunk uncle be extra drunk in the present once again in this same episode was a great way to highlight that nothing has really changed for Tulip, who is a very interesting antithesis to Jesse. Whereas Jesse is trying to do good even when everything seems to be pushing him the other way, Tulip is struggling to overpower her nature and environment, seemingly already accepting the fact that she’s a broken person. I truly can’t stress enough how excellent the character work usually is on Preacher when it’s at its best like this!

The powerful imagery on this series is also a big strength, even without the edge of being free of a budget like the art of the Vertigo source comics are, and that came into focus with the symbolism of fire and darkness, constantly reminding Jesse of what he did in the previous episode. Jesse comes undone all the more as he tries to deny having any stake in what happened to Eugene, even when Sheriff Root comes to Jesse’s house, looking for his lost son. Jesse avoids suspicion, but not from Cassidy, who it’s revealed in this episode actually bore witness to Jesse accidentally damning Eugene, watching what happened from the balcony above. 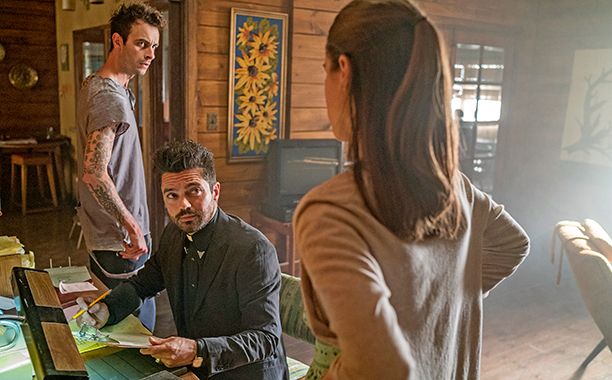 There was some hinting that Jesse may not receive Cassidy’s vampirism well, since only Tulip is currently aware of it aside from Cassidy himself, but where Cassidy really became a highlight this week is the creative and gruesome way that he forced Jesse to confront what he did to Eugene. After hitting Jesse in the face with a fire extinguisher, Cassidy says that the extinguisher is for him, and reveals to Jesse what he is in a dramatic and agonizing way, as he steps into the sunlight, and asks Jesse if he’s going to let his best friend burn too. This was definitely the best moment in an overall superb episode, even if the show ultimately leaving Cassidy’s final fate ambiguous for now is kind of lame and unnecessary. I seriously doubt that Jesse actually let Cassidy die, since Cassidy is a series lead, and is also a lead character in the source comics, but that’s all the more reason why there’s no reason for Preacher not to answer how Jesse resolved that situation. Instead, he just goes inside, refuses to tell Tulip where Cassidy is, and that’s that. Seriously? Like I said, it’s annoying.

Fortunately, another big consequence found a great way to work itself in to Jesse’s dealings this week, as Odin Quincannon shows up to demand the land and church that Jesse promised him. This seems to confirm that Jesse’s abilities didn’t work on Odin after all, possibly suggesting that Jesse can’t influence people who firmly reject God and all related virtues. Jesse of course refuses to sign over the land, but Odin says that he’ll be back, and he’s true to his word! Right as the episode ends, Odin comes with a literal army of workers from Quincannon Meat & Power who seem to be ready to demolish the church, placing Jesse in a very tight spot, right after he’s alienated (or damned) pretty much everyone in his corner. This was a strong ending, and a great cliffhanger tease for next week’s episode!

“He Gone” is another standout Preacher episode, and continues to have this show airing strong as a superb Summer treat for TV watchers, whether or not you’re familiar with its source comics. The funny little moments, such as Cassidy once again trying to justify his distaste for The Big Lebowski to an entire dinner table this time, or Tulip learning that vanilla extract is flammable, helped to punctuate an episode that is otherwise heavy and horrifying for the likes of Jesse’s ever-darkening character, resulting in lots of high entertainment value and engagement. Jesse frantically trying to bring Eugene back right as Odin marches toward him will definitely leave viewers on the edge of their seats too. After all, even if Jesse does manage to bring Eugene back to Earth, that won’t save him from the fury of Quincannon Meat & Power!

Preacher 1.7: "He Gone" Review
Preacher continues strong with another standout episode this week, as those around Jesse start noticing the moral degradation of his character like never before!
THE GOOD STUFF
THE NOT-SO-GOOD STUFF
2016-07-11
93%Overall Score
Reader Rating: (0 Votes)
0%