CBS is launching their dedicated streaming service, CBS All-Access, to a whole new level next year, with the exclusive hosting of a brand new Star Trek series that will be premiering solely on the streaming platform at the start of next year! There’s a fairly big wrinkle to that plan though; CBS All-Access is only available to Americans! Thus, there were a lot of questions surrounding how this mysterious new Star Trek show will make its way to territories beyond the U.S., which were initially not addressed.

Fortunately, that question was answered today, in what’s been a fairly sizable day for Star Trek news, apparently. For most territories, the new Star Trek series, which still doesn’t seem to have an official title yet, will be hosted exclusively on Netflix, and will presumably debut new episodes on that streaming service weekly for those in PAL regions like Europe and Australia. It’s currently unknown whether this includes the show’s pilot episode airing early on the actual CBS television channel in the U.S. this January though, or whether it will simply include any first-run episodes, as they appear on CBS All-Access.

For Canada however, it’s a different story, as Bell Media acquired the Canadian distribution rights to the new Star Trek show, which means that it will actually syndicate normally on Canadian television. This marks the latest high-profile series made for a streaming service in the U.S. that is on syndicated television here in Canada, after the new seasons of sitcom, The Mindy Project were picked up by U.S. streaming service, Hulu after it was formerly cancelled, only to keep airing on Canadian channel, City here in the Great White North, as per usual. In the case of Canada, it’s confirmed that CBS’ special first airing of the untitled Star Trek show’s pilot episode in January will be hosted on CTV, though all subsequent first-run episodes will air simultaneously on Space for English-speaking Canadians, and Z for French-speaking Canadians. When the show’s debut season has wrapped, it will also be hosted on Canadian streaming service, CraveTV at some point after, alongside all of the former Star Trek shows, which are also set to be hosted on Netflix in their entirety before the end of this year. 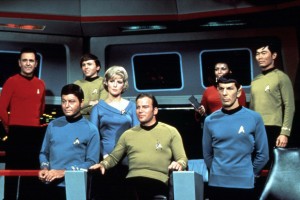 Almost nothing is known about the new Star Trek series for now, the first to hit the airwaves since the conclusion of Star Trek: Enterprise in 2005, though the series was created and will be show-run by Hannibal’s Bryan Fuller. The series will also not tie in to Paramount’s new Star Trek movies that have hit theatres since 2009, which exist in the parallel ‘Kelvin Timeline’ that is independent of the television shows’ and former movies’ canon, and will apparently feature entirely new lead characters that have been never before seen in the Star Trek universe. It’s likely that familiar alien races and planets will be featured at some point however, and some familiar faces could potentially appear, with Star Trek: The Original Series’ George Takei expressing interest in appearing on the series as an aged incarnation of his classic Hikaru Sulu character, who potentially still serves at Starfleet.

Keep charting Eggplante for all major news and updates on Star Trek.