Sonic the Hedgehog fans were already thrown into a frenzy by last night’s announcement of Sonic Mania, an all-new retro-style 2D Sonic the Hedgehog game headed to consoles and PC in Spring of 2017. It turns out that Sonic Mania isn’t the only new Sonic game that’s launching next year though! The series’ main development studio, Sonic Team has also been at work on something entirely new for the series, and Sega unveiled the first tease of it during San Diego Comic-Con, during the same Sonic the Hedgehog 25th Anniversary panel where Sonic Mania was announced.

The pre-rendered CG trailer for Sonic Team’s currently-untitled new Sonic game showed the modern Sonic, as in the one from the recent Sonic Team-made video games, not the one from the rebooted Sonic Boom franchise, speeding towards a burning city. The city appears to be being attacked by an enormous walking machine, likely something built by arch-villain, Eggman, and modern Sonic is almost flattened by it, before being saved by the likes of classic Sonic from the series’ Sega Genesis days! The game then simply detailed a platform list, while also confirming that the developers behind this new game are veterans from the well-received Sonic Colors and Sonic Generations.

Evidence seems to point to this new game being a follow-up of sorts to Sonic Generations, considering that it’s another anniversary-themed title for the franchise, and incorporates both classic Sonic and modern Sonic as separate characters in the same game. Sega also said however that this new game would be an entirely new project in its design, and will likely have a unique hook of its own, much like the Wisp powers from Sonic Colors, the dual play styles of Sonic Generations, or the rotating world designs from Sonic: Lost World. 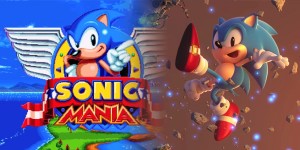 The platform list includes the expected PlayStation 4, Xbox One and PC releases for the new Sonic game, which will be released at retail as well as digitally, but what is potentially more surprising, is that the game was also announced for Nintendo’s mysterious upcoming game platform, code-named ‘NX’! This makes the new Sonic game from Sonic Team the second third-party game to be announced for Nintendo’s mysterious new machine (if one doesn’t count Square Enix publicly admitting that they’re interested in bringing Dragon Quest XI to NX), after Ubisoft’s Just Dance 2017 was confirmed to receive a port for it back at E3 last month, which will almost certainly be a launch title. This would definitely seem to suggest that NX will be more directly competitive with PlayStation 4 and Xbox One in terms of specs and features, a claim that seems to have been echoed previously by Square Enix.

We’ll keep an eye on the development of this new Sonic game, so keep speeding back to Eggplante for all major news and updates on Sonic the Hedgehog.