Along with clarfying previously unknown major characters and villains for Guardians of the Galaxy Vol. 2, Thor: Ragnarok and Spider-Man: Homecoming during their San Diego Comic-Con panel today, Marvel also went a bit further into 2018 with their announcements, confirming both the main villain and lead cast of 2018 movie, Black Panther!

Chadwick Boseman will headline the production as titular character, T’Challa/Black Panther, after debuting in the Marvel Cinematic Universe within this past May’s Captain America: Civil War. Joining him will be Lupita Nyong’o as Nakia, an agent of the movie’s villain, and a recognizable character from Marvel Comics, where she operates under the identity of, “Malice.” While Nyong’o was originally believed to be portraying the movie’s female lead and potential main love interest for its title character, that role instead appears to have gone to The Walking Dead’s Danai Gurira, who portrays Okoye, a member of Black Panther’s all-female squad of bodyguards and wives, the Dora Millaje. It’s possible that Nyong’o was originally portraying Okoye, hence some of the confusion in the rumours that pegged her character as a member of the Dora Millaje (granted, Nakia was a former Dora Millaje member in the movie), though was possibly re-assigned to Nakia, leaving Gurira to be cast as the new Okoye, which possibly explains why Gurira’s casting wasn’t leaked with the rest of the leads. 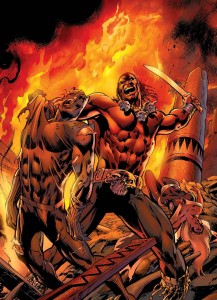 Michael B. Jordan already confirmed his casting as Black Panther’s lead villain last month, but Marvel has now announced the identity of his antagonist as well. Jordan will portray Erik Killmonger, a frequent villain of Black Panther from Marvel Comics, who is an exact physical and intellectual match for the title hero, making him a very fearsome fighter and criminal genius. This seems to quash speculation that Andy Serkis’ Ulysses Klaw, another frequent antagonist of Black Panther from the printed panels, who was featured in last year’s Avengers: Age of Ultron, was planned to be the Black Panther movie’s main villain, though obviously, an appearance by Serkis in Black Panther hasn’t been ruled out, especially for expanded roles in potential sequels. While Marvel didn’t confirm it yet, it’s also believed by most that Martin Freeman will reprise his role as frequent Black Panther ally, Everett Ross in the movie, after Freeman debuted the character in Captain America: Civil War, alongside Boseman’s T’Challa.

Keep lunging to Eggplante for all major news and updates on Black Panther, and other projects in the Marvel Cinematic Universe.