It’s legitimately astonishing that Mike and Dave Need Wedding Dates, the latest goofy Summer comedy from 20th Century Fox, is actually based on a true story. This is far and away the most ridiculous Summer comedy of 2016 at this point, even outdoing the similarly and amusingly outlandish Neighbors 2: Sorority Rising and Popstar: Never Stop Never Stopping in terms of how flat-out cartoon-ish it is, and yet, it all centers around a real-life incident that actually happened to two young men who needed dates for their cousin’s wedding (in the movie, it’s their sister, but the real-life incident was for Mike and Dave Stangle’s cousin), and decided to turn to the most logical outlet for that; Craigslist. Of course.

For whatever reason, the boys’ Craigslist post went viral, and briefly captured the attention of the U.S. media, in turn leading to a book deal, and eventually, this movie. It’s hard to believe, but it’s far more plausible than anything that happens in the movie itself, and hey, that’s fair enough. For all of its proud claims of being based on actual events, to the point where even describing said inspiration as, “Loose” would be an understatement, Mike and Dave Need Wedding Dates is all about simple-minded Summer comedy fun, without any of that pesky logic coming in to intrude on proceedings.

If you’re in it for the same simple good time that the title characters are, then Mike and Dave Need Wedding Dates is good fun, but if you’re seeking literally any degree of depth, then you won’t find it here. The title really says it all, and like the lovable stooges it portrays, what you see is really what you get with this movie. It’s a silly comedy about two dysfunctional men who need dates to their sister’s wedding, and it demands that audiences be alright with that. So, whether or not you really want to seek this movie out probably depends on your instinctive answer to that question.

Mike and Dave Stangle are two characters that represent the very basics of comedic party animals. They have enough added layers to avoid the feeling of them being cardboard cutouts, and the personalities of Zac Efron and Adam Devine, along with their comedic chemistry, do often elevate the production, but there still isn’t a lot to these jokers, should you be concerned about that. There’s a pretense of a journey, but it hits the same rudimentary, apathetic beats that most other comedies of this ilk do. Adam Devine’s Mike Stangle is a proudly immature rum salesman with no interest in growing up, and Zac Efron’s Dave Stangle is slightly more mature, but not by much, being content to go along with Mike throughout all of life, despite secret dreams of branching off to draw graphic novels. There’s an effort made by Mike and Dave Need Wedding Dates to have a heart with its leads, and it does manage it in a few character-driven scenes, but even by the end credits, these characters haven’t changed all that much, and that’s perfectly acceptable, if you’re not hoping for them to truly evolve.

You could make a similar claim of the movie’s female leads, played by real-life best buddies, Anna Kendrick and Aubrey Plaza, as Alice and Tatiana, respectively. Alice was recently left at the altar by her former fiance, and this has had Tatiana attempting to take care of her by encouraging her to sink into a squalor of no ambition and no inhibitions, leading to both of them quickly being fired from their jobs as waitresses. Obviously, Alice and Tatiana are a perfect match for Dave and Mike, respectively, not just in personality, but in immaturity as well. There’s some solid comedy mined from these pairs being so similar to each other too, which both creates some fun conflicts, and ups the simple-minded mischief to a fairly amusing extent, especially when Kendrick and Plaza have the same outstanding comedic chemistry that Efron and Devine constantly display.

One of the only other characters that has even a bit of bearing on the storyline however, beyond being a talking head that nags Mike and Dave about growing up, is the brothers’ soon-to-be-married sister, Jeanie, a sweet, but neurotic young woman who is losing plenty of sleep over her wedding going perfectly, before the variable of her brothers ruining every family event they attend. Sugar Lyn Beard portrays Jeanie as a character that doesn’t quite become a bridezilla, allowing audiences to maintain a stake in caring about the boys shaping up for her wedding, though she does often shift between being a mere plot device, and being the mere receiving end of the other leads’ gags, constantly worrying about events that she obviously has no hope of truly controlling.

The movie also tries to throw in a weird running joke about one of Mike and Dave’s lesbian cousins, Terry, played by Alice Wetterlund, constantly trying to hook up with Tatiana, which is funny in some places, though is also often a source of the movie straining some of its jokes, which is arguably its worst habit. This is a comedy that is all about the laughs, for better or for worse, and it doesn’t concern itself with many other details beyond that. The personalities get the job done though, and will make you chuckle, and sometimes even laugh out loud. By the time the movie is over however, you probably won’t recall much of Mike and Dave’s shenanigans, or why they mattered past the moment you were enjoying them.

Mike and Dave Need Wedding Dates, as I said, pretty much sums up its entire plot’s draw in the title. Sure, after Mike and Dave actually get wedding dates, there’s plenty more events that take place, but it all comes back to some out-of-control guys bringing some out-of-control girls to an important family event, and the expected chaos just ensuing from there. The beats of the storyline are predictable, and often workmanlike, and there isn’t really any real twists and turns to be had. That’s well and good if you don’t mind a straightforward batch of laughs, though again, if you’re hoping for a comedic story that leaves more of a lasting impression, this really isn’t it, especially when its lasting value is outdone so noticeably by both The Nice Guys and Neighbors 2: Sorority Rising from this past May, or even Popstar: Never Stop Never Stopping from last month. 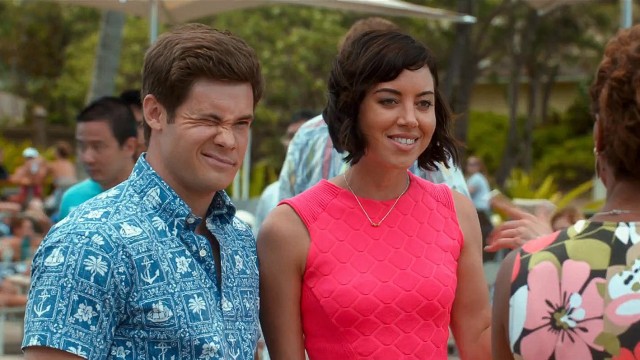 It remains true however that Mike and Dave Need Wedding Dates is pretty good at entertaining audiences in the moment. It’s a fairly boilerplate comedy in the end, providing the requisite laughs, and never truly pushing its premise above and beyond what is expected of it, but it still gets the job done, if you just want some simple-minded entertainment.

Mike and Dave Need Wedding Dates is helmed by first-time feature film director, Jake Szymanski, who you might recognize as the director of HBO’s comedic made-for-TV mockumentary, Seven Days in Hell. This is probably a smart movie for Szymanski to make his feature directing debut on too, since there really isn’t a whole lot to Mike and Dave Need Wedding Dates. Most of Szymanski’s direction simply involves letting the actors carry the production, with a few minor stylistic touches for comic effect, including a surprisingly clever intro sequence that plays into a strong joke early on. Szymanski also seems to have given the actors plenty of room to ad-lib, which is especially evidenced by the amusing outtakes that play over the end credits.

That said though, it’s sometimes evident that Szymanski has never directed a feature film before, since Mike and Dave Need Wedding Dates doesn’t really know when to have restraint. The movie tends to strain certain jokes that probably should have ended several seconds earlier, which sometimes makes the direction of the comedy come off as wired and desperate for attention, not to mention excessively unrealistic. I suppose it’s not necessarily expected of Mike and Dave Need Wedding Dates to be realistic, and not every viewer will care about that, but the movie’s jokes might have felt more clever and occasionally less annoying, had they not strained some of the humour too far into live-action cartoon territory.

Of course, if you’re content with the empty calories of comedy, then Mike and Dave Need Wedding Dates is entertaining, if also pretty unmemorable, beyond its highlight scenes that were mostly already glimpsed in the trailers. There isn’t much more to say about the movie, honestly. It gets the job done, makes par, and doesn’t exceed expectations. It’s a modest comedy for a modest-minded audience, and that’s certainly fair, even if it naturally doesn’t clear the same high bar as the Summer’s previous comedies.