WandaVision dropped a major bomb on audiences last week, with the introduction (or re-introduction) of Pietro Maximoff to Westview, but not the Marvel Cinematic Universe’s previously established Pietro Maximoff. With Evan Peters making the jump from Fox’s former X-Men movies to bring his Quicksilver into the MCU, WandaVision gave its first big hint that it’s creaking open the floodgates to a live-action Marvel Cinematic Multiverse, while simultaneously presenting a compelling new layer to its own mysteries. Even better is the fact that the series hits a superb high note this week, despite seemingly skipping a decade in its ever-evolving classic sitcom homages, forgoing the 90’s in favour of diving into the early 2000’s.

“All-New Halloween Spooktacular!” is a fantastic mix of existential chaos and rapidly-evolving sitcom trappings, with the false reality of Wanda’s Westview pretty much intentionally struggling to hold itself together at this point. This may explain why we’ve been denied homages to beloved 90’s sitcoms like Friends and The Fresh Prince of Bel-Air, namely because Wanda can no longer keep track of her own fantasy world, nor its evolution. On the bright side, we do get a pretty standout early-2000’s sitcom backdrop on WandaVision this week, one that especially echoes Malcolm in the Middle, along with the trend towards edgier, less wholesome comedy stylings that defined a big chunk of 2000’s-era family sitcoms. Of course, at least one classic, longer-running sitcom trope is nonetheless in effect here, with Pietro representing the bad influence, man-child uncle that suddenly moves into the Maximoff house, and predictably brings out the worst in Wanda’s and Vision’s children. 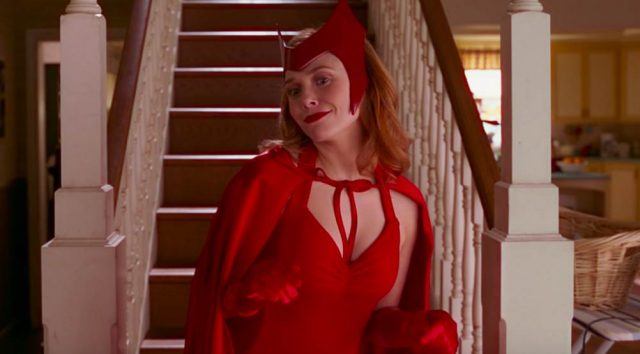 Vision however has suddenly become largely unconcerned with his home life, despite Wanda trying to force him to participate in a big Halloween event at the town square. Instead, Vision remains determined to get to the bottom of Westview’s mystery, using his position in the neighbourhood watch to begin poking around the outer section of the town. What Vision finds is truly disturbing as well, namely that citizens on the outskirts of Westview have been forced into simple, unspoken NPC-style routines, while Wanda’s and Pietro’s attention is focused around the inner neighbourhood and its Halloween festivities. It’s quite the busy Halloween as well, with kids suddenly running, screaming and scaring each other all over the area. Of course, we know it’s not actually Halloween, especially with plenty of S.W.O.R.D. scenes remaining intercut with the rest of WandaVision’s storytelling this week, but this sudden turn is likely explained by Vision pointing out a huge plot hole in WandaVision’s previous episode; There are no children in Westview. Clearly, Wanda is now overcompensating for this oversight, and that’s why it’s supposedly Halloween, with kids running around everywhere.

Those holding out hope for a mentally sound, undercover Wanda might want to check their expectations at the door as well. As of this episode, it’s looking especially likely that Wanda has indeed had a complete psychotic breakdown, which is further egged on by ‘Pietro’. In fact, Peters’ Pietro quickly becomes a suspicious figure in his own right, possessing knowledge that he shouldn’t logically have, and at one point even dropping his Sokovian accent during an argument with Wanda. Pietro even points out that Wanda has lost her own accent within Westview, while poking at the fact that Wanda doesn’t seem to know how she created the Westview Anomaly, nor what she meant to do with it. Most shocking of all however is when Pietro taunts Wanda about Vision being dead, which results in a violent reaction from her, shortly before the ‘Hex’ expands further!

On this note, something especially satisfying about this episode is the fact that it finally managed to tighten and improve the storytelling on S.W.O.R.D.’s end. The S.W.O.R.D. sequences finally stopped being dense exposition dumps in this episode, and instead contributed to WandaVision’s over-arching mystery in a more engaging, active way. Specifically, Monica makes a fruitless attempt to call out Hayward for provoking Wanda, only to result in her, Darcy and Jimmy being ejected from the S.W.O.R.D. camp. The three escape captivity regardless though, with Monica and Jimmy going to meet a contact in order to try and get them inside the Westview Anomaly, while Darcy opts to stay behind, and keep poking into Hayward’s hidden computer files. Yes, if you were suspicious of Hayward already, you have even more reason to be suspicious of him here, since Hayward appears to have his own private feed into Westview, particularly surrounding Vision. Does this mean that Vision’s body was taken out of S.W.O.R.D. custody by Wanda for reasons other than an apparent mental breakdown? Could Wanda have actually been protecting Vision from Hayward all this time?

Vision, meanwhile, is left to discover the horrible truth about his fate in this episode, and his response to it is especially dramatic and exciting. After discovering Agnes as one of the folks on the outskirts of town that’s largely become stuck in an inactive state, Vision mentally frees her for a bit, only to learn that he has no memory of being an Avenger, and that he’s supposed to be dead. Agnes appears to break down herself at delivering this news, but Vision restores her prior mindset and sends her on her way. Sure, Agnes could be just another victim, but it’s also possible that she could be trying to protect Wanda from the real evil in Westview, which appears to be whatever is wearing Quicksilver’s face at this point. Even amid all this drama though, when Vision struggles to break out of the Westview Anomaly, despite literally coming apart in the process, he begs S.W.O.R.D.’s agents to save the citizens of Westview, rather than himself. Darcy even tries to urge the agents to help, only to be handcuffed to a vehicle, right as the Anomaly expands, following Billy telling Wanda that he senses his father is dying. 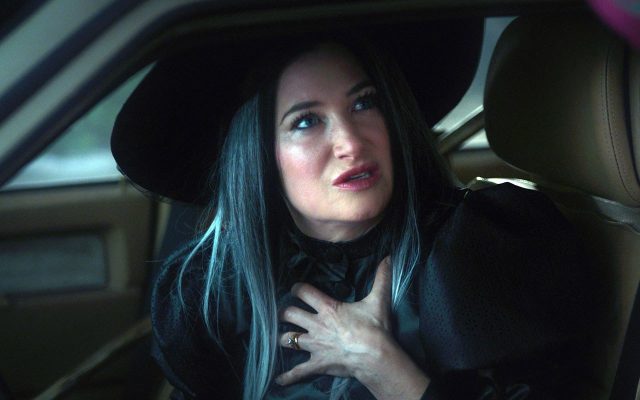 Wanda deliberately expanding the Westview Anomaly’s range to a much larger radius, thus keeping Vision alive, further cements the fact that Wanda herself appears to be largely in control of all of it, even if another sinister influence may still be at work. Wanda now has many, many more hostages to boot, including Hayward’s entire crew of agents, and Darcy! This could ironically place Monica and Jimmy outside of the Hex while Darcy ends up within it, but even more crucially, we get confirmation in this episode that coming in and out of the Hex has fundamentally changed Monica’s DNA. Monica of course is a superhero, complete with light-based superpowers, in Marvel Comics lore, one that’s gone under several code names, and even taken up the mantle of Captain Marvel at one point! Not only does this potentially lay the groundwork for Monica to embrace a superhero identity in the MCU, but it also continues to foreshadow that Wanda’s reality-tampering in Westview could be a key basis for how mutants eventually come to Marvel’s shared live-action universe. It’s looking increasingly likely that Wanda’s Infinity Stone-powered ‘Hex’ is littered with unique, undefined radiation, and that this radiation rewrites human biology on a fundamental level, including giving people like Billy and Tommy their own powers!

Even with its mysteries reaching spectacular new high points this week, WandaVision still clearly has some key components to its overall puzzle that have yet to be revealed. As of this week, the show is striking pretty much a perfect balance between colourful fun, sinister drama and mind-bending sci-fi, and its many questions have never felt more engaging or exciting. “All-New Halloween Spooktacular!” beautifully capitalizes on Vision officially breaking from Wanda’s ‘script’, and discovering virtually the whole truth about who he is and where he came from, while also presenting a superb, surprisingly disconcerting role for Evan Peters’ ‘recast’ Pietro. Suspicion as to whom the real villain of WandaVision truly is once again effectively shifts in this episode as well, with Hayward, Pietro and Wanda herself all seeming like they’re the ones most relishing the traumatic events in Westview at this point, while Agnes now appears more innocent, though doesn’t completely shed suspicion in the process. Even with all of the shady dealings continuing to unfold both inside and outside of Westview however, the humour still isn’t completely sacrificed in the end, especially while Peters’ Pietro cutely motivates Billy and Tommy to be exasperating devil children, as their own powers start better coming into focus this week. 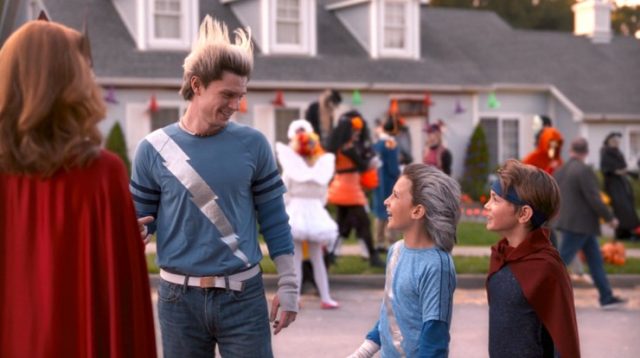 It would currently appear that WandaVision is only going to get better as Wanda inevitably starts losing control over her own illusion, especially now that it’s confirmed that Vision literally can’t exist outside of the Westview Anomaly. Moreover, there are now many more victims of Wanda’s reality-warping to boot, and with a considerable chunk of S.W.O.R.D.’s forces (and Darcy) now trapped in Westview alongside Wanda and Vision, any front line of defense against whatever Wanda is doing now appears to have fallen away. It leaves viewers with no choice but to wonder if Wanda herself actually is the greatest evil currently facing the MCU’s true reality, and if the real danger is simply Wanda’s own eroding sanity in a post-Thanos world that she’s felt nothing but grief and loneliness in.