Now that the curtain has been lifted on S.W.O.R.D. and how they’re responding to the ‘Maximoff Anomaly’ as of last week’s episode, WandaVision makes another change to its formatting with this week’s episode. “On a Very Special Episode…” moves back and forth between a hybrid-style narrative, cutting between the interior, sitcom-themed dealings of Wanda’s and Vision’s lives in Westview, while also chronicling the continued operations of S.W.O.R.D. in the Marvel Cinematic Universe’s true reality, who are continuing their efforts to contact Wanda.

If you thought WandaVision was weird before now too, you ain’t seen nothin’ yet! WandaVision really cranks up its appealing strangeness this week, going above and beyond the expected development of moving Wanda’s false sitcom reality into the 80’s, complete with liberal homages to 80’s sitcom favourites such as Family Ties, Perfect Strangers and Who’s the Boss? (there’s even a brilliant Family Ties-style family painting intro this week, which looks subtly off because Wanda is looking in the wrong direction with a vaguely forced smile, and the more you look at it, the more it nags you about not looking quite right. Man, this is a clever show!), while simultaneously continuing to pull at the delicate threads surrounding the fantasy world that Wanda appears to have crafted for herself, and her once-dead synthezoid husband. A few more pieces of the show’s overall puzzle predictably fall into place this week too, and while I’m sure there’s still some other sinister presence at work in Westview, it’s appearing increasingly certain to S.W.O.R.D. that Wanda has become unstable and dangerous, and is willfully holding Westview’s citizens hostage.

Admittedly, the sitcom end of this episode is more fun and engaging than the S.W.O.R.D. material. The S.W.O.R.D. scenes continue to deal almost exclusively in exposition, which can sometimes grind this episode’s pacing to a halt, especially when they keep going over plot threads that the audience would have already figured out after last week especially. This hybrid storytelling also appears to have made, “On a Very Special Episode…” WandaVision’s lengthiest episode yet, stretching to just over 40 minutes in runtime. Again, this is because there’s lots to unpack both inside and outside of Westview this week, alongside some softer, but still fairly lovable comedy to enjoy in the Maximoff/Vision household proper.

That said, the comedy also suffers a bit this week, despite still getting a few decent, nostalgic laughs here and there. In fairness, this is inevitable, since WandaVision is shifting toward a darker tone with the latter half of its run, namely when its fake sitcom reality starts gradually collapsing. Vision even becomes fully aware that something is wrong with the town in this episode, using his own powers to reveal that ‘Norm’ is a terrified Westview citizen that just wants, “Her” to stop mentally torturing him. This appears to further incriminate Wanda as the mastermind behind Westview’s hostage situation. Surprisingly though, Monica ends up going to bat for Wanda at a S.W.O.R.D. briefing, stating that Wanda’s powers may be what’s affecting the town, but that Wanda herself also appears to be trying to minimize the damage, despite Wanda also pillaging Vision’s corpse from its top secret location at S.W.O.R.D. headquarters. This turn was originally meant to be the basis of a cut post-credits scene from Avengers: Endgame, according to Marvel Studios boss and Marvel CCO, Kevin Feige, but regardless, it’s tough to argue that Wanda looks pretty damn guilty right now, despite Monica’s protests.

Thus, it’s tough to blame Acting Director Hayward for trying to target Wanda with a drone strike, using an 80’s S.W.O.R.D. drone that won’t be affected by Wanda’s reality bubble. As clever a plan as this is however, it doesn’t work, and merely leads to Wanda making the astonishing move of stepping outside of the sitcom reality bubble, and tossing the broken drone back at S.W.O.R.D.’s forces! This is the first direct confrontation between Wanda and the greater forces of S.W.O.R.D., and sure enough, Wanda warns S.W.O.R.D. to stay away, or face consequences. Something that’s also curious about this scene is the fact that Wanda’s Sokovian accent returns while she’s delivering her warning to S.W.O.R.D., despite the fact that she speaks with a normal American accent in Westview’s sitcom world. Is this the genuine Wanda unleashed on S.W.O.R.D. then? It would appear that way, despite Monica rightfully pointing out that Wanda, a known telepath, knowingly brought a S.W.O.R.D. agent into her home. Did Wanda know Monica’s true identity the whole time? What’s going on here?!

Vision is certainly asking the same questions, especially after realizing that Westview’s reality is a lie. All the while, Vision’s suspicions surrounding Agnes continue to grow, especially when Billy and Tommy find a lost dog, which they then name, “Sparky.” Believe it or not, this is a very obscure reference to a Vision comic book series, wherein Vision created a synthezoid dog named Sparky, and gave it to his family as a pet. Sparky seems to be a normal dog in the MCU however, to the point where he even accidentally dies after eating from Agnes’ azalea trees. This is meant to illustrate to Billy and Tommy, who previously aged themselves up to ten, that some things in the world are permanent, and not even Wanda’s powers have the authority to reverse death…. Or do they? Not only is it tough to argue with Vision claiming that Agnes is a little too convenient with her helpful visits and tools, but Agnes no longer appears fazed by open mentions or displays of Wanda’s powers either. Is it truly Wanda that’s trying to change the rules of Westview with every new WandaVision episode? Or, is the, “Her” referred to by ‘Norm’ not actually Wanda, but Agnes? Again, there’s an interesting discrepancy here, and the way that WandaVision appears to be gradually unraveling the potential menace of Agnes is proving to be very enthralling. 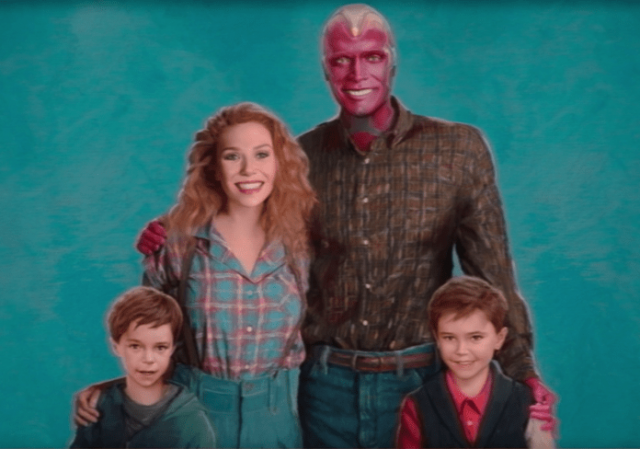 Oh, but the most enthralling mystery is yet to come! After a spat between Wanda and Vision, at which point Vision fights through a credit roll (it makes sense in context) to confront Wanda about how their reality doesn’t make sense, the two briefly flex their powers at one another, as Vision begs to see what’s beyond the world of Westview. A surprise visit disarms the two however, one unprompted by Wanda (or so she claims), eventually leading to Wanda opening her front door to see… Quicksilver?! I don’t mean the MCU’s late Pietro Maximoff either, who was never actually referred to as, “Quicksilver” during his brief tenure in 2015’s Avengers: Age of Ultron. I mean Evan Peters’ Quicksilver, from 20th Century Studios’ X-Men movies!! Needless to say, that’s a hell of a cliffhanger to end this week’s episode of WandaVision on, with an onlooking S.W.O.R.D. baffled by the, “Recast” of Wanda’s dead brother, while every Marvel fan in the real world will probably be doing a spit-take.

Evan Peters’ surprise appearance as a ‘recast’ Pietro Maximoff is not only a fantastic throwback to Fox’s now-aborted X-Men movie franchise, but also a highly compelling tease that’s bound to send the Marvel movie fanbase into a frenzy. The first and most pressing question is, is this indeed the exact same Quicksilver from 20th Century Studios’ X-Men movies, plucked from some other corner of the Marvel Multiverse? Or, is some malicious entity playing with real-world fans’ expectations as much as they’re toying with Wanda in-universe?

Another detail throughout this episode (and the previous one) that really stands out is how much talk there is of Westview’s, “Radiation” among the S.W.O.R.D. crew, particularly Darcy, and how they don’t know how said radiation may affect Westview’s citizens. It’s not guaranteed, but this could be the first legitimate hint that mutants are coming to the MCU sooner than we think, and that Wanda and the Westview anomaly may be their origin point! Considering that we already know WandaVision is a loose MCU adaptation of Marvel Comics’, “House of M” storyline, it’s entirely possible that Marvel Studios could be planning to flip the script on how that comic book arc ended, namely with Wanda causing, “M-Day”, at which point the world’s mutant population went from millions to just under a hundred. Perhaps the MCU is planning its own, “M-Day” in the wake of WandaVision, only instead of taking away mutants, it will actually be the day that mutants begin to appear in Marvel’s live-action universe. Whether via a fundamental retcon of the MCU’s reality, or a catastrophic radiation leak that results in an epidemic of people suddenly manifesting superpowers (basically mimicking a previous MCU arc on ABC’s Agents of S.H.I.E.L.D. series, which created a global epidemic of Inhumans), it will be exciting to see the inevitable fallout from the Westview hostage situation after WandaVision has wrapped, most notably in 2022’s upcoming MCU movie sequel, Doctor Strange in the Multiverse of Madness.

WandaVision is starting to get especially juicy for Marvel fans, as the reality of Westview almost reaches out of the screen, and plays with our real-world expectations of what could result from Wanda’s mass reality-tampering. Evan Peters’ Quicksilver making a surprise appearance in Westview further begs the question of whether WandaVision will finally throw the floodgates open on acknowledging a live-action Marvel Multiverse, and/or whether this miniseries will serve as the origin of mutants in the MCU, now that the X-Men movie rights are safely back home with Marvel Studios. For non-fans however, WandaVision may threaten to lose its audience’s focus in a few scenes this week, especially when the S.W.O.R.D. crew is forced to interrupt for more heavy-handed exposition, and more jokes that don’t quite land with the same degree of efficacy as those in the sitcom reality. The ending tease of Evan Peters reprising his X-Men movie role as Quicksilver will no doubt also be lost on anyone that’s not familiar with Fox’s former X-Men movie franchise. Barring those potential gripes though, WandaVision is starting to pay some serious dividends for Marvel enthusiasts especially, and I’m more excited than ever to see what kind of metaphysical damage will continue to plague the MCU both during and after the remainder of this series’ run!