Pennyworth comes to its final completed episode before being disturbed by COVID-19 complications this week, which is seeing the remainder of Season 2’s episodes delayed until March. Fortunately, while fans will have to wait almost an entire month for the latter batch of Pennyworth’s Season 2 episodes, “The Hunted Fox” does at least represent an uptick in quality for the show. Despite Season 2 wasting a lot of time meandering around without much focus so far, this episode finally capitalizes on the ongoing character arcs a bit more, on top of introducing another promising connection to DC’s Batman Family mythology. Not everything is fixed though, and Pennyworth still has some refinement to do before its sophomore season can start properly living up to its potential.

As I’d hoped, Bazza’s death from the end of the previous episode does provide a boost to Alfred’s core story arc, now that he’s dealing with a fresh supply of guilt over his ambitions getting one of his closest friends killed. Alfred’s dark side once again comes out when he’s roped into a job with his old captain, Gulliver Troy as well, giving us another episode about an appealingly unhinged Alfred barely holding things together after a tragedy. Sure, this is a bit of a retread of Season 1, when Alfred initially lost his late fiancee, Esme, but Alfred not completely escaping his demons still proves that Pennyworth’s over-arching character conflict maintains some legs in Season 2.

Alfred brutally beating the Lord Mayor of London nearly to death over Troy’s heist job is especially hair-raising! Fortunately, this episode also knows when to pull back and keep us guessing as to Alfred’s true moral designs though, since Alfred still does appear to display principles with Troy. After Troy strikes Melanie in a fit of anger, for example, Alfred intervenes and nearly beats down Troy in response, though he does quickly reconcile with Troy as well, and agree to one last job before fleeing to America. Alfred still keeps an extra angry Dave Boy in line too, so he hasn’t completely broken in the wake of Bazza’s demise. I don’t imagine that the good relationship between Alfred and Troy will survive this season though, especially with Alfred secretly starting an affair with Melanie after agreeing to Troy’s last job!

Naturally, Bet also remains a big highlight on Pennyworth this week, finally making it to London with Katie, after what I can only assume is some sort of kinky favour to a lorry driver. Not only does this tease that Bet could be running into Alfred again soon, but it also finally reunites us with Peggy, who is apparently running a sex shop, go figure. More promising hints about Bet’s past are teased here, with Peggy all but spelling out that Bet is still traumatized over whatever unseen tragedy struck their other sister. Now that the two established Sykes sisters are seemingly free of obligation to the Raven Union, I’m hoping that the Sykes family drama keeps getting more focus, ideally with Katie continuing to be roped into it. Either way, I’m happy to see Peggy again, and see that she’s done the Sykes equivalent of landing on her feet. I must say however that the best part of this story arc is when Bet sees the Lord Mayor that Alfred beat down, and simply robs him after lying about calling for help. It’s official; Bet and Katie are the Pennyworth buddy duo that I never knew I needed!

Sadly, while we do see improvements in Alfred’s story arc this week, and the Sykes sisters excelling as usual, the rest of Pennyworth remains in a bit of a stubborn rut for now. One of the biggest issues here is that such a huge chunk of this episode focuses around Thomas and Martha, two characters that Pennyworth has done almost nothing of value with all season so far. At least the two get to headline a bit of a fun subplot in this case though, when they both have to convince Thomas’ sister, Patricia to leave a lecherous Gotham City fashion designer that she decides to become engaged to. Martha pretending to seduce the guy before kicking the crap out of him, and ensuring Patricia runs him out onto the streets stark naked, is at least a bit funny, if nothing else. The subsequent hook-up between Martha and Thomas is pretty trite by comparison, but hopefully these two rekindling their romance helps to improve their story arcs, especially when Pennyworth already appears to have gotten bored with Thomas’ engagement (which is apathetically broken off-screen), and Martha’s and Thomas’ rift.

Finally, there’s more bickering within the ranks of both the Raven Union and the English League this week, particularly when the English League must elect a new Prime Minister to replace Archbishop Potter. John Ripper actually delivers a pretty fun pitch on this note as well, suggesting a Suicide Squad-style initiative wherein England’s worst prisoners are conscripted to fight against the Raven Union. He even has one prisoner murder another in front of the Queen! This would have been pretty damn amazing to see, but sadly, Aziz and his appeal for diplomacy ends up winning the day, ensuring that Aziz is elected as England’s new Prime Minister. This feels like an interesting turn for Aziz’s character, but I have to admit, I’m disappointed that Ripper got shut down so quickly. A prisoner-filled bloodbath against the Raven Union would be another welcome sight when it comes to making Pennyworth’s second season more interesting and memorable. 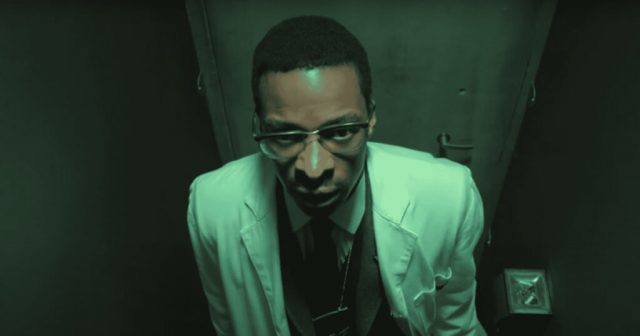 Meanwhile, the Raven Union is continuing to debate the efficacy of Project Stormcloud this week, and this just feels increasingly more tedious when they’re inevitably going to use it, no matter how much Harwood initially appears to him and haw over it. Despite Mrs. Gaunt continuing to be vehemently against the deadly gas, Harwood is obviously leaning towards using it to take London. Most suspicious however is that Harwood’s cognitive state appears to be deteriorating, which Gaunt quickly notices in this episode. It appears at this point that Salt is possibly drugging Harwood, and forcing him to comply with the use of Stormcloud, but so far, that implication isn’t confirmed one way or the other. We do however glimpse a mole within the Raven Union’s ranks towards the end of this episode, and that mole is none other than familiar Batman Family gadget maker, Lucius Fox! Granted, we only see Lucius appear in the final minutes of this episode, wherein he secretly videotapes a live demonstration of Project Stormcloud, but it’s nonetheless great to see that Pennyworth is finally delivering another big connection to the Batman Family mythology, and bringing it into these 1960’s-inspired prequel adventures.

Pennyworth seemed to be on a downward slide over the past couple of weeks especially, but thankfully, the show did manage to tighten a bit of its storytelling this week, before it takes a month off the air, and at long last plans to line up its Canadian episode broadcasts with its American ones in early March. “The Hunted Fox” nicely sent Alfred down another dark path of compromised morals in the wake of Bazza’s shocking death last week, while also mercifully doing away with the tired, ineffectual row between Martha and Thomas, even if a lot of their subplot was still filler. The politics taking precedence over the actual battles throughout England remains a problem though, especially when Pennyworth’s narrative focus is still spread very thin at this point. The slow burn intrigue could nonetheless lead to an explosive, satisfying end to Season 2 during its latter half this Spring, but Pennyworth does still need to pick up the pace, and figure out a battle plan between its two warring factions. At least Bet, Peggy and Katie provide another entertaining aside from the core storytelling though, strangely thriving more than ever now that they’re free of Lord Harwood’s military campaign (for now).

Pennyworth 2.4: "The Hunted Fox" Review
Pennyworth sees some welcome improvements this week, before taking a month off the air, even if the show's strained narrative focus and tired political squabbling remains an issue.
THE GOOD STUFF
THE NOT-SO-GOOD STUFF
2021-02-08
75%Overall Score
Reader Rating: (0 Votes)
0%