Moms sure are special, aren’t they? For males like me most notably, we can never truly appreciate the real depth of the stress and pressure that comes with being a modern mother. Given the recent R-rated comedy renaissance of this decade as well, it seemed like only a matter of time before someone took another very stressful scenario, motherhood, and mined it for some hopeful comedy gold. Thus, we have STX Entertainment’s Bad Moms, a movie that proudly declares throughout the marketing that it comes from the same duo that wrote 2009’s mega-hit R-rated comedy champion, The Hangover.

Obviously, The Hangover is a pretty tough act to follow, and as you can imagine, Bad Moms doesn’t quite measure up to that masterwork. What the movie does succeed at however is being an entertaining comedy that is exceptional comfort food for women with children, and even women in general, yet is funny and well-written enough to still be quite enjoyable to a male viewer. Bad Moms still trails the highlight comedies that came from this Summer blockbuster season’s earliest weeks though, since it ultimately wimps out of truly challenging the status quo of Hollywood comedy endings, but if you’re a mother, or merely appreciate the challenge of being a mother, there’s still plenty of enjoyable shenanigans to bring the laughs with.

Bad Moms stars Mila Kunis as Amy Mitchell, a privileged, but over-stressed working mother who assumes almost all of the duties in her house. Amy’s husband, Mike, played by David Walton, is something of a layabout who aggressively tries to get out of contributing anything to the household, and when an indiscretion of Mike’s ends up turning Amy’s world upside-down, right when the overzealous PTA boss, Gwendolyn, played by Christina Applegate, pushes Amy over the edge with her demands, Amy decides that she no longer cares about being a good mother.

This is a fairly rudimentary setup for a comedy of this nature, and despite Kunis delivering a good performance throughout, Bad Moms does take a short while to actually get going, having a slightly drab, overly chatty intro with sparse laughs to offer. Once Kunis does kick off her crusade to rebel against modern motherhood however, her character becomes a lot more interesting, finely balancing Amy’s revolt without truly abandoning her likability. Actually, even when Amy is supposedly being a ‘bad mom’, the movie’s script clearly takes her side, making her more of a blunt crusader that’s simply saying what many modern mothers are thinking, and are usually afraid to speak up about in any serious capacity. Even during the obligatory ‘dark moment’ later in the movie, where Amy must examine her actions and behaviour, she’s never truly portrayed as being flat out wrong, which does somewhat hurt the movie’s climactic and equally obligatory redemption sequence. 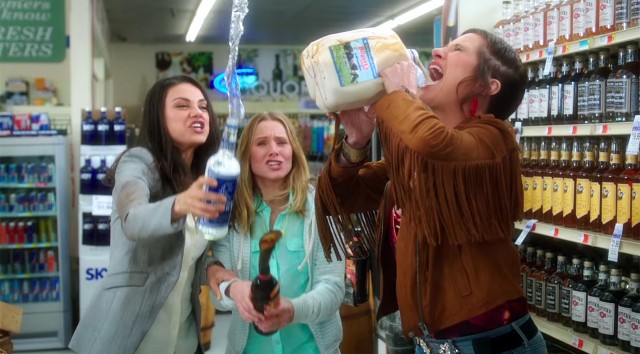 Of course, it also helps that Amy is complemented by two humourous extremes in her new mom buddies, those being Carla, played by Kathryn Hahn, and Kiki, played by Kristen Bell. Carla feels like the only true ‘bad mom’ in the movie, if I’m being honest, and even then, she’s never portrayed to be a true monster. As with many Kathryn Hahn portrayals, Carla is simply a fiercely independent person who can’t be bothered with dwelling on details, especially when she doesn’t mince her words regarding her overgrown, unintelligent son, and her lack of interest in said son’s affairs. Because Carla is the one character that actually veers closest to truly challenging the modern perception of what a mother should do and how she should act, Hahn is arguably the movie’s funniest actress, often owning many of the biggest laughs and most humourous lines.

Bell’s character meanwhile has moments of amusement, though she represents the other, more bland side of Amy’s character as a yes-woman people-pleaser, being an even more put-upon mother with an even more ungrateful husband and even more children to look after. Bell, like Hahn and Kunis, has lots of talent as a comedy actress, but her character here feels like she has to play off of the other personalities to get real laughs, with Bell doing her best to inject Kiki with energy and lovable misery, even if many of her best jokes come with the help of Hahn especially.

Surprisingly though, it’s Applegate that ends up being the movie’s best and most memorable character, despite being the supposed antagonist that viewers aren’t supposed to aspire to. There’s a very interesting twist with Applegate’s character later in the movie that sort of throws your whole perception of her for a loop, and while one could argue that the resolution with the Amy/Gwendoline rivalry is a little too easy when it does arrive, it’s surprisingly Applegate that will tug at your heartstrings the most in Bad Moms, even when she spends so much of the movie being an over-the-top bully. That makes the head-scratching moments where the script is clearly contriving inexplicable, over-the-top behaviour for Gwendoline and how she oppresses the PTA as a whole feel a bit frustrating, straining several jokes, and hurting the otherwise relatable credibility of the story.

Lastly, if you’re wondering whether the men play any real role in the storyline, honestly, they’re shallow plot devices and not much else. In fact, this is another area where Bad Moms is occasionally guilty of straining jokes, and, for a movie written and directed by two men especially, it sometimes feels like the movie is trying way too hard to portray every male character as either an idiot or a sex object, and the latter especially includes Amy’s conveniently-widowed, impossibly perfect, unrealistically attractive love interest, Jessie, who literally serves no other purpose in the movie. This has the aftertaste of pandering to frustrated, unappreciated housewives and mothers, which I understand is kind of the idea behind Bad Moms in general, but considering the smart ideas that the movie occasionally examines through its personalities, its treatment of the male characters is a bit too tacky and on-the-nose. I doubt that the target audience will dwell on this much though.

Bad Moms, like I said, doesn’t quite hit its stride in the opening moments, and takes a bit of time to truly start getting reliably funny. Once the inciting incident occurs though, the movie becomes a lot more amusing and fun to watch, even if it does check off a lot of familiar boxes as far as domestic revolt-themed comedies go. The laughs are what matter, and Bad Moms certainly delivers a good chunk for its target audience of real-life mothers especially, though it’s doubtful that you’ll be truly surprised by almost any turn of the plot, especially when the plot sometimes feels like it’s actively contorting itself to fit into expected tropes of so-called ‘chick flicks’.

Despite the fact that Bad Moms is overall a funny movie, that contortion is another major factor that somewhat drags it down in the movie’s later reaches especially. For all of its desire to be raw, insightful and straight-shooting about the plight of modern mothers, Bad Moms only partially taps on those ideas. It’s sadly yet another R-rated comedy that wimps out of truly baring its teeth in the eleventh hour, and its conclusion feels too convenient and milquetoast to truly upend convention the way that the movie wants to. Before that excessively convenient ending portion though, at least the movie is fun, comforting and satisfying for the bulk of its duration, which definitely isn’t bad.

Not content to simply write the script, Jon Lucas and Scott Moore also direct Bad Moms, after previously misfiring with 2013’s rather weak 21 & Over, which served as their directorial debut. Bad Moms is a clear cut above 21 & Over, thankfully, and while it still feels like Lucas and Moore are refining their craft as directors in this movie, which can be noticeable between presentation inconsistencies and just plain weird editing at times, they do manage to get quite a bit of solid mileage out of this movie’s great lead cast.

Lucas and Moore wisely let the women carry Bad Moms, with minimal intervention too. Everyone is clearly having fun, and it’s tough not to smile at the end credits, which show the actresses in small interviews with their real-life mothers next to them, talking about how they were raised. This is actually a pretty cool touch by Lucas and Moore, and solidifies the clear heart that beats beneath even Bad Moms’ less successful gags and story elements. Perhaps Bad Moms would have been more impactful and sharp if it was a full-blown dark comedy that wasn’t afraid to reject a clean conclusion, but you can’t deny that the movie still works as a feel-good celebration of mothers and appreciating what they do for us.

Bad Moms is a satisfying comedy that probably won’t be recalled beyond 2016, but it does show that its writer/director duo is gradually improving, and as a comedy that’s taken on its own merits, it’s a pretty good time, especially for women. The fact that the movie can still be enjoyed by men for its charm and solid humour also speaks to the fact that Bad Moms is pretty well-made for what it is, and it definitely succeeds as a crowd-pleaser, if not a standout.

Like many responsible mothers though, Bad Moms parties pretty conservatively in the end, and is perhaps too afraid to truly unleash its potential fury on the double standard of modern parenthood and the ludicrous expectations that are now placed on modern mothers. The fact that it sometimes misguidedly seems to point the finger at husbands and fathers doesn’t help either, and sometimes has the movie skimming too close to being yet another throwaway chick flick that’s meant to be used and discarded like a wet nap, a feeling that’s also made worse by the disappointingly toothless resolution to the story.

Still, the great lead cast and the glimmers of true insight make Bad Moms well worth the trip to the theatre for hard-working wives and mothers that need a girls’ night with their friends (or children/spouses), and if you happen to be a man, the movie is more or less comparable to the fairly amusing Mike and Dave Need Wedding Dates, if you’re looking for another acceptable big screen comedy to help you beat the heat this Summer, or are just in the mood to rent one down the road. It’s too bad that the movie doesn’t fully manage to truly challenge social convention, since it doesn’t go all the way with many its ideas, but the fact that it’s clearly trying to do a good thing, and entertain its audience all the while, still certainly counts for something.

Bad Moms Review
Bad Moms is a funny, likable examination of the plight of modern motherhood, but it's let down by its excessively milquetoast progression and conclusion.
CHARACTERS75%
PLOT65%
DIRECTION70%
THE GOOD STUFF
THE NOT-SO-GOOD STUFF
2016-08-05
70%Overall Score
Reader Rating: (0 Votes)
0%