WandaVision appears to be hitting the crescendo of its sitcom homages this week, as some of the show’s biggest mysteries are finally resolved in its seventh episode. “Breaking the Fourth Wall” naturally adapts the mockumentary sitcom sensation of the latter 2000’s to early 2010’s, taking particular inspiration from the format of Modern Family, while also featuring an intro segment that’s very intentionally reminiscent of The Office. As a result, interview-style cutaway gags crop up throughout this episode, soliciting the thoughts of Wanda, Vision, Agnes, and even Darcy at one point. Yes, Darcy has survived her trip into the Westview Anomaly, where she serves as a semi-convenient path back to Westview for the displaced Vision.

With only two episodes left in WandaVision’s run after this, the show is clearly gearing up for its big climax this week, meaning that we get a lot of foreshadowing, and not quite as much forward momentum as last week especially. Last week’s stellar Halloween-themed episode is understandably a very tough act to follow, and, “Breaking the Fourth Wall” doesn’t quite manage to keep pace, especially when it’s left to burn most of its runtime circling around the creeping realization that Wanda’s ‘Hex’ is officially starting to come apart. Wanda is clearly exhausted, depressed and unable to properly accommodate her children by this point, resulting in her dumping the boys off on Agnes, who is all too happy to entertain them at her house. 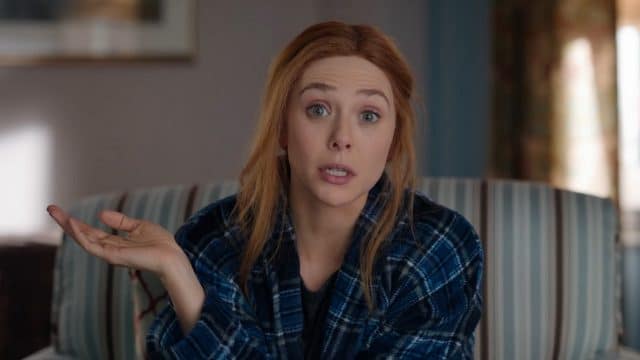 A definite plus behind this episode is the fact that WandaVision’s humour is once again in top form here. The mockumentary sitcom style plays perfectly off of Wanda’s increasing disillusionment and struggle to maintain her false reality. It’s also equally effective at spotlighting the confusion surrounding Vision, after Darcy fills him in on his life story, from his origins as Iron Man’s faithful A.I. assistant, Jarvis, all the way to his unfortunate demise at the hands of Thanos, a demise that Wanda tried and failed to stop during the events of Avengers: Infinity War. Beyond that, Vision and Darcy spend most of this episode sidelined, sadly, as Darcy catches Vision up on everything he ‘forgot’ since being killed by Thanos. The duo do at least get some great gags though, even if there’s disappointingly little time spent in the circus environment created from the S.W.O.R.D. agents that Wanda trapped in her expanded Hex.

On that note, this episode makes undeniably clear that Wanda herself is wholly responsible for the Hex’s expansion, and she knows it. Wanda openly acknowledges to the camera that she’s responsible for creating and controlling the Hex, despite the fact that said Hex is now having its details fluctuate wildly between time periods, even shifting in and out of colour at times! Wanda is now struggling to keep the Westview illusion going, which is no doubt why Agnes is providing increased interference, complete with taking Wanda’s sons off her hands. Billy even comments that he likes hanging out with Agnes because, unlike his mother, Agnes’ mind is, “Quiet.” This is no doubt a key clue regarding one of the true mysteries behind WandaVision, especially considering what we finally learn about Agnes’ identity at the end of this episode. 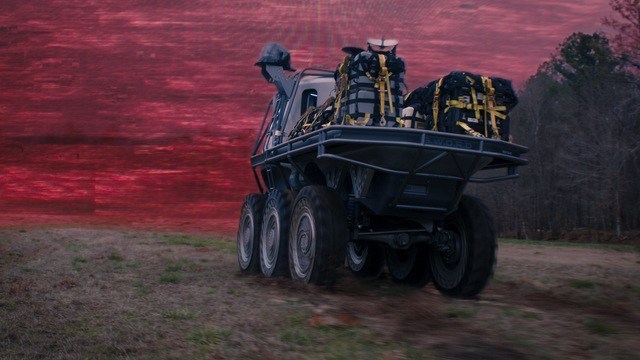 Before that though, Monica makes another attempt to break into the Hex, enlisting one ‘Major Goodner’ (who doesn’t appear to exist in Marvel Comics lore) as her mysterious contact that loans her a space rover. Even the powerful rover fails to get through the Hex’s barrier however, leading to Monica simply charging through it, and her fundamental willpower finally bringing her through, resulting in heightened electromagnetic/infrared vision, and strange blue eyes. This would appear to indicate that Monica’s third trip through the Hex has completed her transformation into her Marvel Comics superhero identity, Photon, and that Monica now has superpowers in the Marvel Cinematic Universe! She doesn’t wield them right away though, even when Monica’s latest confrontation with Wanda inevitably turns heated, and Agnes subsequently leads Wanda away, insisting that Monica has overstayed her welcome, and must leave Westview.

As much as this episode’s pacing didn’t nearly match last week’s episode especially, the big lead-up to its final reveal was truly excellent. After Agnes gets rid of Monica, and brings Wanda into her home, Wanda inquires as to the whereabouts of her sons, to which Agnes responds that they’re probably in the basement. After going into Agnes’ basement however, Wanda finds a mysterious dark chamber coursing with purple energy, with Billy and Tommy nowhere in sight, which Agnes eventually traps her in. It’s at this point that we finally get a revelation that many Marvel Comics enthusiasts probably saw coming a mile away– Agnes is actually the MCU’s Agatha Harkness! According to her account of the Westview Anomaly, Agnes/Agatha directly manipulated several key events in Westview, including the re-appearance of ‘Pietro’ (whom Wanda openly admits to her sons is not their real uncle, further indicating that Wanda is trying to suppress reality), Dottie’s talent show, and even the mockumentary segments of this very episode! She even gets a cute little theme song, “Naughty Agatha”, to close out this episode, complete with a mid-credits scene of sorts, which has Monica discover the way into Agnes’/Agatha’s basement via cellar door, only for ‘Pietro’ to appear, and seemingly incapacitate her! 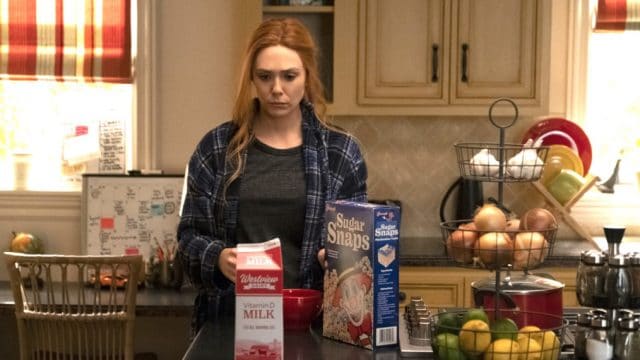 Agnes being the MCU’s Agatha Harkness will hardly be surprising to devout Marvel enthusiasts that are familiar with Wanda’s/Scarlet Witch’s comic book history. What’s more interesting however is that WandaVision so far seems to be indicating that Agnes/Agatha is the mastermind behind everything in Westview, and is seemingly the true villain of the show. Even then though, there is some doubt cast in this immediate belief, such as Billy not sensing any mental activity from Agnes/Agatha, even when her mind should be going crazy trying to control Wanda and the town. On top of that, Darcy’s prior snooping through S.W.O.R.D.’s files also confirms here that Hayward has been trying to re-activate Vision all this time, and was very likely behind Wanda stealing Vision’s body from S.W.O.R.D. headquarters. How much else might Hayward have a hand in then? Moreover, is ‘Naughty Agatha’ truly the real villain behind Westview, or is she merely a patsy that’s serving as WandaVision’s latest clever misdirect for both Wanda, and this show’s real-world audience?

Another especially exciting commercial section is also featured this week, centering around ‘Nexus’ antidepressants. This of course is a reference to Wanda/Scarlet Witch being a ‘Nexus’ being in Marvel lore, namely a key to the multiverse that isn’t limited by alternate realities. This seems to be the first indication that Wanda will serve the same function in the MCU, openly laying the groundwork for Wanda’s eventual role in next year’s movie sequel, Doctor Strange in the Multiverse of Madness. Either way, the ultimate reveal of Agnes’ true hand in Westview, along with her real identity as Agatha Harkness, is wonderfully executed in, “Breaking the Fourth Wall”, despite a notable slowing in pacing this week, especially with how blatantly Vision and Darcy end up sidelined by increasingly comical obstacles. On that note, it’s also good to see WandaVision’s humour once again hitting a high note in this episode, after the show seemed to pivot more towards exposition and psychological drama over the past couple of weeks.

WandaVision may be temporarily slowing down a bit this week, as it prepares to execute its ultimate climax over the next two weeks, but it still has a few engaging mysteries and conflicts that have yet to be resolved, even after Agnes has been unmasked as a key figure in Wanda’s comic book career. Given Agatha Harkness’ most frequent place as a mentor to Scarlet Witch in Marvel Comics lore however, not an antagonist, one still has to wonder whether there remains another sinister force manipulating events in Westview, especially when Billy, a powerful telepath in his own right, is failing to sense trouble from his nosey neighbour.

WandaVision Episode 7: "Breaking the Fourth Wall" Review
WandaVision slows down a bit this week, returning the emphasis to humour, while exceptionally leading into a huge reveal with major implications for the series' over-arching mystery.
THE GOOD STUFF
THE NOT-SO-GOOD STUFF
2021-02-19
82%Overall Score
Reader Rating: (0 Votes)
0%