NOTE: Spoilers from throughout the first season of “Preacher” are present in this review

After generating enormous ratings numbers on established comic book-inspired series, The Walking Dead and its spin-off, Fear the Walking Dead, AMC is now launching a brand new comic book-inspired show in hopes of increasing that ratings success further, this time from DC Comics’ Vertigo catalogue of graphic novels. The selected comic series, Preacher, created by Garth Ennis and Steve Dillon in the 90’s, also happens to be the brainchild of comedy writing duo, Seth Rogen and Evan Goldberg in its television adaptation, oddly enough, as well as fellow showrunner, Sam Catlin. This effectively makes Preacher a more weird and darkly humourous series for AMC’s genre lineup, rather than the stark-serious duo of The Walking Dead shows.

Preacher’s darkly twisted creativity and strangely addictive off-the-wall fun factor also make it one of the coolest and most unique comic book-inspired shows to make it to the airwaves at this point, for AMC and otherwise! The show’s first season is a huge success, delivering ten standout episodes that are very cleverly written, full to burst with character, and constantly thrilling to watch, ultimately elevating Preacher to likely being the best Vertigo-inspired series on TV right now, outclassing FOX’s pretty good Lucifer and The CW’s often great iZombie. It’s also AMC’s best new show since Better Call Saul, and once you get past the initially eyebrow-raising strangeness, you’ll find a show that engages quite unlike any other, so long as you don’t mind the fact that it’s an even more bold-faced attack on the fallacies of modern religion than Lucifer! 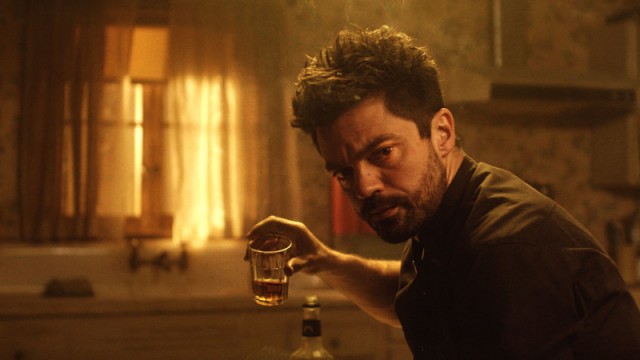 In fact, Preacher serves as something of an interesting inversion of the commentary that founds Lucifer. This is because Preacher depicts a world in which God has abandoned Heaven, which is revealed at the very end of the season (even though it won’t be a surprise to anyone who has read the source comics), while Lucifer depicts a world in which The Devil has abandoned Hell. This no doubt means that fans of Lucifer will likely take to Preacher, and vice-versa. A key difference, and the main thing that makes Preacher a much darker series than the surprisingly light-hearted Lucifer however, is that in Lucifer, The Devil is the main character, and we know full well what he’s up to. In Preacher though, God is simply nowhere to be found, which is a lot more ominous. It also gives Preacher a very human sense of dread to boot, as it mirrors a society in which we have no idea how to deal in any moral absolute anymore, making Preacher feel like a very timely TV show, despite the source comics being two decades old at this point.

As dark and violent as it can often be though, and without the apocalypse of AMC’s The Walking Dead universe to justify the violence and darkness now, Preacher is given a big heart, thanks to its great lead cast, and particularly its lead character. Dominic Cooper’s Jesse Custer is a small town preacher with a violent past, one trying to do good in a world that constantly seems to be working against him. Jesse’s journey goes to many interesting places throughout Season One, in both his past and his present, and by the end of the season, you don’t necessarily get a much better sense of whether he’s truly a good or a bad man, though you always want to be along for the ride with him. This is also because the show carefully picks its moments of Jesse making use of his ‘power’, Genesis, a wild entity born from the unholy love shared between an angel and a demon, which bonds with Jesse, and allows him to influence even divine figures with his words. Every time Jesse uses Genesis matters heavily in the story, and admirably, the writers avoid ever using it as a cop-out, only organically bringing out Genesis’ abilities when it matters, and when it makes sense to do so.

The show’s supporting cast is equally excellent as well. Ruth Negga’s Tulip O’Hare initially establishes herself as a super-cool badass, though as the season goes on, the layers of her vulnerability and emotion get peeled back, exposing a strangely grounded woman who seems more outwardly confident, yet is no more sure of her place in the world than Jesse. Even Jesse’s new ‘best mate’, Joseph Gilgun’s Cassidy, an Irish vampire who takes almost nothing seriously, manages some surprising character growth as the season goes on, providing a strange moral compass to Jesse when his power threatens to consume him, despite Cassidy supposedly being an abomination. Ordinary civilian folks in Annville like Lucy Griffiths’ Emily Woodrow, a single mother and assistant to Jesse that was invented for the show and doesn’t exist in the source comics, as well as disfigured troubled kid, Ian Colletti’s Eugene Root, and his lawmaker father, W. Earl Brown’s Sheriff Hugo Root, add quite a lot of character to the town of Annville and its dealings, especially as supernatural forces start to more gradually creep into the series.

Season One’s key antagonist, Odin Quincannon, played in a standout part by Jackie Earle Haley, also feels like a strangely grounded, oddly relatable personality, despite existing in such an eccentric world. Odin himself can be quite eccentric, passing the time by listening to recordings of animal slaughter, and caring so little about morality that he actively shoots lobbyists in his own office, but his aggressive atheism and nihilism comes from a real place, be it grief over simultaneously losing his entire family in a ski lift accident, or having the responsibility of Annville’s economy placed largely on his own shoulders. Odin doesn’t see moral compromise as a big deal, and the scariest thing is, he’s often one of the most sensible people in the town. Using such a strangely real-world antagonist for the show’s first season was a very smart choice, since it nicely illustrates just how morally bankrupt the world is, and how there doesn’t seem to be any other option for good, honest people.

Obviously, the supernatural side of the show also plays a big part in proceedings, though in contrast to the source comics, the supernatural elements are often fairly restrained, at least in this first season. There are of course some exceptions, namely a highlight comedy bit where a Seraphim, an enforcer angel trying to track down and recapture two runaway angels, DeBlanc and Fiore, who are looking for Genesis while claiming they, “Work for the government”, keep killing each other and respawning in a small hotel room. Jesse and Cassidy even get involved in that scene in some pretty spectacular ways, and this moment perhaps exemplifies Preacher’s quality best in many respects throughout its first season; Weird and over-the-top dark, but also so entertaining and smart in the process.

The only weak element of Season One, as much as it’s cool on paper, was the introduction of another key character from the comics; The Saint of Killers. Certain episode intros showed bits and pieces of the violent life of the Saint of Killers within the Old West, complete with the awful death of his own family, and at the very end of the season, it’s revealed that the Saint is constantly living these events in a loop, as torment in Hell. The Saint is a big character in the source comics, and the twist of him being in Hell the whole time was fairly clever, though the character contributes nothing to Season One in the end, and largely just feels like a head-scratching setup for next year’s second season. That’s a shame, since this is a great character, and since he was trapped in Hell all season, he really wasn’t allowed to do much, until DeBlanc and Fiore broke him out to sic him on Jesse for Season Two, even if DeBlanc appeared to be shot dead in the process.

The way that every other element of Season One was explored and wrapped up however was pretty much universally superb. This even included the shocking decision to destroy all of Annville at the end of the season, seemingly killing every recurring cast member, including Emily and her children, Odin and his employees, Sheriff Root, and whoever else was milling about town, leaving the door open for Jesse, Tulip and Cassidy to go on a big road trip next season, as the Saint of Killers prepares to hunt down Jesse. Perhaps leveling Annville is a bit heavy-handed, but it’s an interesting way to cement that, after learning that God has abandoned Heaven, there truly is no turning back for Jesse and his friends. It also deals with the convenient issue of a whole town now knowing that God is not only real, but also missing in this universe, with Eugene Root dodging the destruction, simply because Jesse accidentally banished him to Hell with Genesis, and still has yet to get him back out.

The world of Preacher is just strange enough to not feel too real, yet also feels intelligently grounded enough to feel like it could be real in some twisted plane of reality. This delicate balance makes for a show that is heartfelt in all of its insanity, and dramatic in all of its pitch black humour. Like I said, there’s nothing on television quite like Preacher, even considering its vague, inverted similarities to fellow Vertigo-inspired series, Lucifer on FOX. The result is one of the coolest and most interesting television shows to debut in 2016, as well as something wholly unique and refreshing among genre shows, and especially comic book shows. Primetime television is filled to the brim with no shortage of comic book shows now, between DC, Marvel, Image and even DC’s Vertigo imprint in three cases, but Preacher stands apart as something truly special, being dark without being depressing, and being terrifying without being truly disturbing. In a weird, wonderful way, Preacher makes the idea of despair become strangely entertaining, because, through all of the over-the-top hopelessness, it manages to illustrate that there’s things to live for and enjoy, even in a world that seems like it has no good left in it.

Preacher: Season One Review
Darkly compelling, squeamishly over-the-top and amusingly bleak, Preacher is a brilliant new comic book-inspired series quite unlike anything else, and its debut season will enrapture viewers looking for something distinct and fun!
THE GOOD STUFF
THE NOT-SO-GOOD STUFF
2016-08-08
90%Overall Score
Reader Rating: (0 Votes)
0%