After being brought up as a hopeful movie for Marvel Studios several years back, Marvel’s Runaways since dropped off the radar, with no release plans made since. Marvel Studios head, Kevin Feige was adamant that plans for Runaways weren’t going to be scuttled, but that didn’t fix the radio silence surrounding the planned adaptation of the modern Marvel Comics series. Fortunately, that silence ended today, with Marvel confirming that Runaways has been re-tooled as a television series to be put together by Marvel Television instead, and the show has already been given the green light by streaming service, Hulu as its sole provider in the U.S.!

This is Marvel’s second exclusive release plan for a video streaming platform, as they’ve already released two seasons of Daredevil and one season of Jessica Jones on Netflix, both of which have a new Netflix season in early development as well, with Luke Cage, Iron Fist, The Defenders and Punisher set to debut after them as fellow Netflix Original shows. Presumably, Runaways will also join the Netflix shows in being part of its own hidden corner of the Marvel Cinematic Universe, with other current MCU-set TV shows including syndicated ABC series, Agents of S.H.I.E.L.D., which debuts its fourth season next month, and Cloak & Dagger, which is in development for ABC’s subsidiary channel, Freeform. ABC is also attempting to launch an MCU-set half-hour sitcom on ABC, Damage Control, inspired by the Marvel Comics series of the same name.

While it’s exciting that Runaways has found new life at Marvel Television, for us Canadians, and other international fans, it also begs the question of how the series is going to be distributed in other territories. Hulu, unlike the more global Netflix platform, is only available in the U.S., after all, and obviously, Marvel is going to have to make use of other platforms to distribute Runaways in other regions, since it’s extremely doubtful that a Marvel Television series would be firmly restricted to the U.S., considering the Marvel Cinematic Universe’s enormous worldwide success at this point. Will the series simply be distributed on Netflix like Marvel’s many other streaming-based shows in territories outside the U.S.? We’ll likely have to wait and see, since Runaways doesn’t currently have a release window. 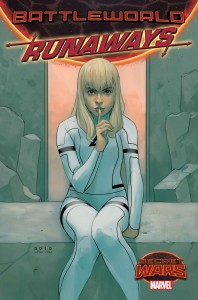 Runaways began as a Marvel Comics series in 2003, initially being quickly cancelled, though later being revived in 2005, where it ran across three subsequent volumes, before seemingly concluding in 2015. The series stars a group of characters whose parents are part of a group of super-villains called “The Pride”, with the kids comprising Nico Minoru, the daughter of spellcasters who can use magic herself, Karolina Dean, the daughter of aliens who can make use of solar power, Molly Hayes, the daughter of two mutants who has superhuman strength and invulnerability, Chase Stein, the son of two twisted scientists who wields flame gauntlets, Alex Wilder, the son of mafia bosses who has no powers, but is a strategic genius, and Gertrude Yorkes, the daughter of two time travelers, who has a psychic link that allows her to control a genetically-engineered dinosaur from the future, because comic books.

The group later comprised more characters as well, namely Victor Manchu, a cyborg created by arch-villain, Ultron that could manipulate machinery, Xavin, the son of two alien Skrull warriors who could manifest the abilities of the Fantastic Four, and Klara Prast, a Swiss immigrant and abused child bride who can control plants. It’s likely that most or all of these characters will be a part of the Runaways TV series, though many will also probably have tweaked origins, particularly Molly and Xavin, as their lineage is currently off-limits to Marvel Television, on account of 20th Century Fox currently owning the movie rights for X-Men and Fantastic Four, which prevents any related characters, lore or settings from being featured in the MCU, including mutants and Skrulls. The MCU has established some easy workarounds for both already though, since Molly could be an Inhuman instead of a mutant in the TV series, thanks to Agents of S.H.I.E.L.D. largely positioning a growing wave of Inhumans as spiritual stand-ins for mutants in the MCU. Xavin, meanwhile, could be an offspring of the alien Chitauri forces from The Avengers, without his relation to or abilities from the Fantastic Four present in the TV show, assuming that Marvel isn’t about to regain creative control of the Fantastic Four rights, as some rumours claim.

Keep fleeing to Eggplante for all major news and updates on Runaways, and other Marvel Television projects.