It was only a matter of time, but Nintendo is jumping on the bandwagon of mobile endless runners very soon. The Big N announced Super Mario Run today, with Mario creator, Shigeru Miyamoto taking the stage during today’s iPhone 7 and iPhone 7 Plus Apple Event reveal to unveil the game. Super Mario Run will also be a timed exclusive on iOS, where it will release on the App Store for iPhone and iPad devices this December, and will presumably come to the Google Play store for Android-powered smartphones and tablets at a later point. 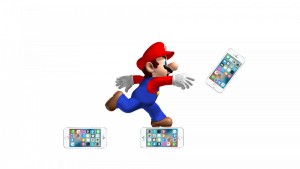 Super Mario Run seems to take most after Ubisoft’s Rayman Jungle Run and Rayman Fiesta Run mobile spin-offs, and will have Mario automatically running right, as players tap the screen to make him jump around obstacles and hazards, while also collecting Coins. The game’s App Store listing claims that it will offer three modes, with the first being a basic mode of taking on the endless runner-style courses on offer, the second challenging players to best the ‘style’ of other players in these same courses, and the third allowing players to spend collected Coins to design their own courses. According to Nintendo, Super Mario Run will not be free-to-play either, and will have its download price announced at a later date. The game will however offer a free demo for iOS users when it launches, should they wish to try it out before purchasing.

With the announcement of Super Mario Run comes a small bit of bad news for those anticipating the previously announced mobile spin-offs for Nintendo’s Animal Crossing and Fire Emblem franchises as well. Both games have been delayed, and will now launch after Super Mario Run, meaning that they won’t arrive until 2017. Nintendo does promise however that both mobile offshoots will launch before the end of March 2017, which is when Nintendo is due to launch their mysterious new dedicated gaming platform, code-named ‘NX’. In a small bit of brighter news, Nintendo also confirmed that their mobile mega-hit, Pokemon GO will release on Apple Watch in an altered form, allowing players to detect Pokemon and undertake workout regimens, though they won’t be able to catch any Pokemon they find using an Apple Watch, unfortunately.

Keep dashing to Eggplante for all major news and updates on Mario games, and other Nintendo-made mobile spin-offs.