After its typically over-crowded season premiere last week, Gotham tightened its storytelling for the following episode of this week, “Burn the Witch.” With a big focus on rounding up Fish Mooney, and an equally exciting subplot that sees an extreme makeover for Ivy Pepper, this was a pretty entertaining episode of Gotham overall, and one that also benefited from the better story focus in contrast to last week.

Another big improvement in this week’s episode is Valerie Vale, who felt like little more than a chatty plot device in the season premiere, though now feels like a more interesting, fleshed-out character. Valerie is quickly growing on me, and it’s great to see the show quickly nailing down how her character should work. She’s very much like the ‘Lois Lane’-type character of Gotham, being brash, outspoken and more than a bit playful, yet also intelligent and resourceful enough to be appealing beyond the fact that she’s a beautiful woman with a lot of personality. Thanks to the better storytelling, Valerie’s resourcefulness and playfulness came into better focus, especially in how she interacts with Gordon. 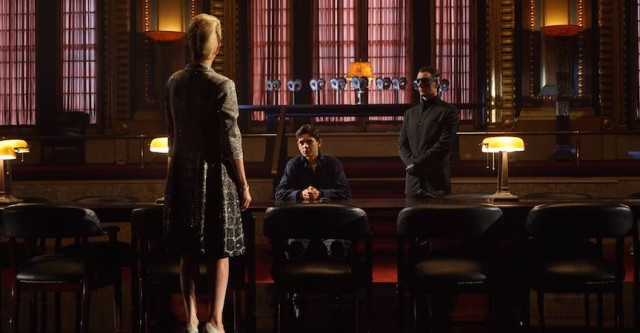 It’s just too bad that Gotham blows its load way too fast when it comes to Gordon’s and Valerie’s obvious sexual tension. For most of the episode, the two have a great sense of rapport, and seeing Valerie get one over on Gordon, denying him the Fish Mooney collar after working with him for a story regarding Penguin’s bounty on Fish, was actually pretty cool. The uneasy tension between Gordon and Valerie also came into superb focus when they’re forced to pay a visit to Barbara, who is the only one who knows where Valerie’s source, Selina Kyle (who never appears in the flesh this week), is hiding out. Barbara toying with Gordon, particularly when she picks up on the growing attraction between Gordon and Valerie, made for some nicely sinister dialogue, especially when Barbara declares that she had a pretty twisted dream about Gordon as Gordon and Valerie walk out of Barbara’s bar. That’s all great, and it’s sort of hard to believe at this point that Barbara used to be one of this show’s most insufferable characters, since she really does seem to be better off as a baddie.

But then, Gordon and Valerie hook up at the end of the episode, and that kind of ruins the fun of their subtle flirtation. Really, Gotham? You couldn’t have waited a few episodes, and built this relationship up more? This new hook-up for Gordon also comes at the awkward moment of Leslie seemingly returning to Gotham City, which is revealed in the episode’s final scene. That just seems a little too dramatically convenient. Leslie isn’t guaranteed to cross paths with Gordon right away, mind you, but it would be kind of annoying if the show tries to force a love triangle with Gordon for this season, which would feel kind of inappropriate and dumb, even as a symbolic way of Gordon’s ‘cop’ and ‘soldier’ personalities doing battle with each other. Leslie’s a great character, but Valerie clearly makes more sense as a love interest for now, considering Gordon’s revised, less moral direction for Season Three. 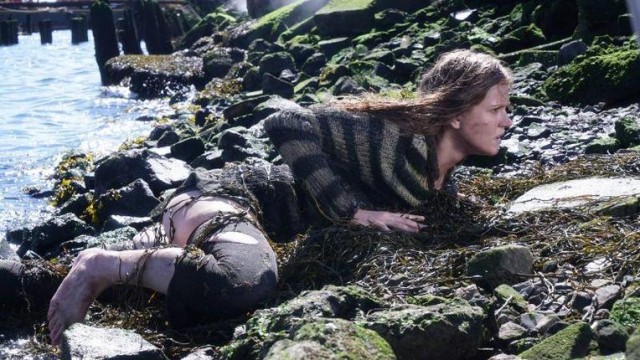 On the bright side though, the Ivy Pepper subplot, while feeling largely disconnected from the rest of the show’s current affairs for now, was pretty enjoyable. Maggie Geha’s older, sexy Ivy immediately makes the character more interesting and memorable, and well beyond a mere mouthy sidekick that was constantly playing second fiddle to Selina. Granted, the older Ivy doesn’t do much this week, beyond get taken in by a surprisingly kindly divorced man that actually doesn’t try anything with the clearly confused, vulnerable and very attractive young woman (what are the odds of that?), but she’s already showing a nicely sinister side, after bashing her poor saviour’s head in with a pot, following his trashing of his dead plants. Ivy’s plant affinity still isn’t fully realized yet, and it will hopefully be fleshed out over the course of the season, though it turns out that aging the character a bit may have actually been the right call, since it’s now a lot more plausible that a character like this will become Poison Ivy one day.

We also get to check in with Bruce, who successfully gets his meeting with Catherine, the representative of the Court of Owls. Turns out, Bruce was bluffing about having dirt on the organization, go figure, but it’s not long before he realizes that he’s in over his head, and agrees to stop looking into the Court of Owls, their dealings at Wayne Enterprises, and the murder of his parents, since he knows he can’t fight a force this strong. This was a nicely humbling moment for Bruce, and for a bit, it actually does seem like he’s out of options. Even Alfred feels that this may be as far as they go. Of course, the show does keep Bruce’s tale going though, when that clone of Bruce stumbles into Wayne Manor towards the end of the episode. I’m really curious as to what they do with this character. Is this supposed to be a forerunner to a recognizable Batman foe like Hush? Could this character even be a potential candidate for the future Joker of the Gotham universe? The idea of The Joker being a deranged Bruce Wayne clone would be pretty outlandish to most DC fans, but I wouldn’t put that idea past Gotham, if I’m being honest. 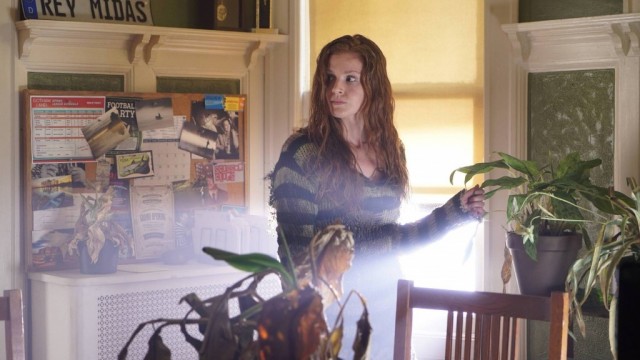 After Bullock gets snatched by Fish Mooney in a bid to lead her to Hugo Strange however, the stage is set for a pretty exciting climax, where the GCPD and a mob led by Penguin surround the hidden building that Strange is imprisoned in. Seeing Hugo Strange again is pretty satisfying, since he’s one of this show’s best villains to date, and this climax put Gordon no longer being a cop to fairly good use, as he plays the GCPD and Penguin’s mob to get Bullock back safely, have some of Fish’s mutant friends taken down, and allow Penguin to get his hands on Fish single-handedly. As Penguin demands Fish’s final words though, he’s surprised to hear a heartfelt confession of why Fish couldn’t kill Penguin at the bridge. The simple answer is that Fish turning Oswald Cobblepot into The Penguin, a character that Batman fans and overall DC fans know as one of the deadliest criminal forces in Gotham City, was her greatest accomplishment in life, and she just couldn’t destroy that. Though it pains him, Penguin allows Fish to walk away with Hugo Strange, in another ironic moment that reminds us of how much Penguin can be more honest than many of the GCPD officers on this show, even including Gordon lately!

Now that Gotham doesn’t have to jump around frantically establishing the many moving parts that will be used to build Season Three, it’s easier to settle into this newer, crazier vision of Gotham City in the years before Batman will come to protect it. I’m wondering if the Court of Owls is going to come into play more in the season’s back half, since they seem to have Bruce in a pretty firm corner, and the show seems to want to spotlight the fallout from Hugo Strange’s experiments more than anything else for now. That’s fine, I guess. Like I said previously, Gotham strangely benefits from just embracing comic book-style lunacy at times, since at least that provides more avenues for entertainment than the super-serious vision of a gritty police procedural that just happens to be set in a Batman-less Gotham City. Maybe Fish will squeeze a solution out of Strange, and maybe she won’t, but it still looks like a while yet before the GCPD and Gordon manage to clean up Strange’s mess, and maybe that’s for the best, since Strange is currently the gold standard for baddies on this show.

Gotham 3.2: "Burn the Witch" Review
Gotham tightens its focus and smooths out some of its storytelling in an entertaining episode this week, which sports a return for Hugo Strange, and a sexy new Ivy Pepper.
THE GOOD STUFF
THE NOT-SO-GOOD STUFF
2016-09-27
82%Overall Score
Reader Rating: (0 Votes)
0%