The Big Bang Theory is now able to start properly laying the groundwork for Season Ten’s events, after wrapping up the problematic ‘second wedding’ storyline that ended off Season Nine, and had to be capped off in the season premiere last week. “The Military Miniaturization” gives us our first proper taste of where the show’s storytelling will start venturing this season, and as is likely predictable, a lot of the season’s front half at the very least is no doubt going to revolve around both Bernadette’s pregnancy, and the guys’ new invention.

Both of those storylines amped up significantly in this week’s episode, though one storyline definitely stood above the other. The humour in this episode was noticeably better than the season premiere, particularly in the guys’ plot, and fortunately, said humour also ventured beyond the guys simply worrying about the military shutting them down. Finally, the show started properly exploring the idea of the guys contributing to the military-industrial complex, something that Sheldon is absolutely fine with, though the rest of the guys are more on edge about it. Raj is a bit disconnected from the situation, since it’s not his invention, but even he manages some decent input on the subject. 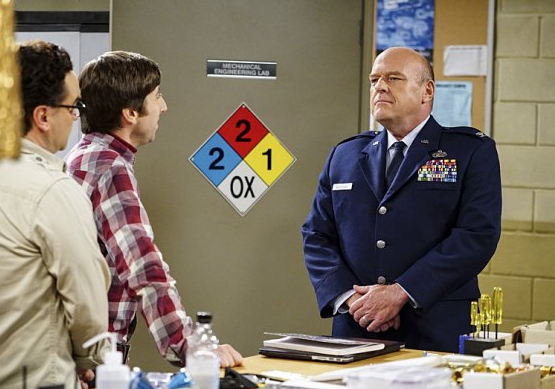 Speaking of Raj, he’s the one question mark for Season Ten of The Big Bang Theory at this point, which is annoying, since it feels like the show hasn’t often known what to do with Raj lately, beyond his love triangle from last season, which only seemed to periodically show up when no other storylines were there to focus on. It seems like this problem is going to get worse before it gets better, since Raj is so detached from the military conflict that’s shared between Leonard, Sheldon and Howard. Maybe Raj can serve as a useful outside perspective, but for now, he’s still feeling too much like a bystander. I hope the show finds a worthy storyline for Raj to pursue on his own this season.

Fortunately, even if Raj didn’t get to play a part in meeting with Colonel Williams, this storyline’s final results were certainly worth the wait. Sheldon being ordered not to speak, and shown silently freaking out as Colonel Williams claims that engineers are better than scientists and MIT is a great school, made for one of the episode’s best jokes, especially when Sheldon’s biggest silent reaction comes after Williams mistakenly states that the Death Star is from Star Trek. The joke is spoiled a bit by Sheldon blurting out all of the things he wasn’t supposed to say soon afterward, but the twist of Sheldon getting the rest of the guys into a bind by giving them an absurd two-month time window to shrink their revolutionary invention was a solid idea for future storylines. Again, I hope that the guys’ dynamic isn’t hurt by having to work constantly, and having Raj separate from their project, but for now, at least the guys’ paranoia giving way to becoming victims of their own success made for an interesting curveball. 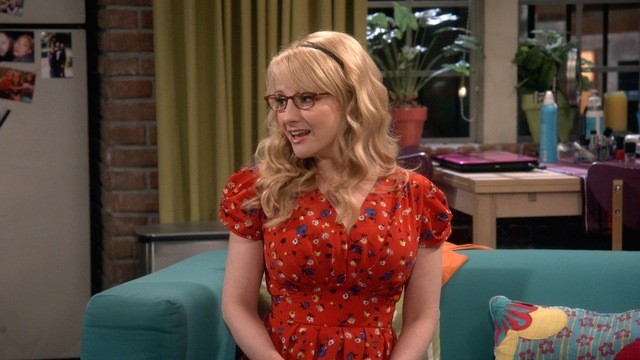 Like I said however, the subplot surrounding Bernadette’s pregnancy was noticeably less effective. Bernadette becomes bothered when someone tells her co-workers about her pregnancy, and after some encouragement from Penny and Amy, Penny confesses to Amy that she was the one who accidentally let the news slip, and is freaking out. It was an accident, but Bernadette quite clearly communicates that her pregnancy could jeopardize her chance to participate in a lucrative and esteemed research project. The bones of an interesting conflict are seen here, but they’re often hurt by Bernadette’s worries making little sense. Did she seriously think she could hide a pregnancy for more than a couple of months anyway? Even if the project would take more than that amount of time, she was bound to get barred from it either way, if her work was legitimately concerned about that, and would probably be in big trouble for lying if she tried to sneak it under her boss’s nose. If the project is shorter than that amount of time, why would her pregnancy make a difference? Bernadette acting like her pregnancy will destroy all of her job progress and hard work is especially illogical.

This leads me into the second major issue with Bernadette’s plotline, and a problem with Bernadette in general lately; She’s far too unlikable for most of this storyline. If we’re to assume that Bernadette would be barred from the project out of concern for the baby, after she admits more than once that she cares more about money than the well-being of her child (yes, she seriously admits that in this episode, and the show plays it off as a joke!), that just makes Bernadette look really bad. Moreover, even if she apologizes for it eventually, Bernadette’s overblown rage at Penny upon finding out about Penny letting the news slip, accidentally, is pretty excessive. She even screams at Amy in a following scene, simply because Amy brought her food from McDonalds out of the kindness of her heart, and it was the wrong food. Seriously, chill the hell out, Bernadette! I’m surprised that Amy and Penny want anything to do with her at all lately, after how nasty she’s been. I get that Bernadette is pregnant and hormonal, and that will make her more aggressive, but there’s a line between ‘more aggressive’, and, ‘just plain bitchy’, and the writers are crossing that line now. They need to dial Bernadette back a bit, because it’s hard to enjoy the sight of her abusing her friends without consequence, and implying that she’d be fine with endangering her baby, if it meant a bigger payday. 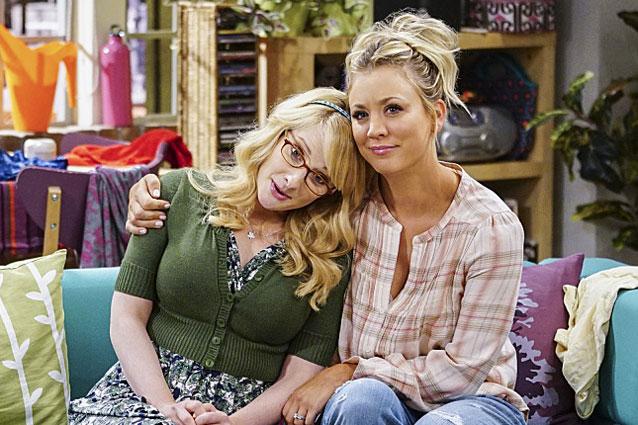 At least things end on a fairly funny note though, as the guys discover the classified area of CalTech, complete with a retinal scanner that they screw with in many ways for one final set of jokes. No matter how much these guys move up in the world, it looks like they haven’t fully matured at all, and that’s a good thing for this show, I imagine. Regardless, “The Military Miniaturization” was an enjoyable episode that had a solid main plot, even if the subplot was pretty problematic. If Bernadette can reign it in, and the show can find an alternate use for Raj, I suspect that Season Ten will be a fair enough way to keep this long-running series going, though for now, it looks like the military project is more interesting than Howard becoming a father, especially when Bernadette is inevitably going to start trying people’s patience even more than Sheldon if she keeps her recent schtick up!

The Big Bang Theory 10.2: "The Military Miniaturization" Review
The Big Bang Theory put the guys in an interesting new position this week, as they hear out the Air Force's proposal for their invention.
THE GOOD STUFF
THE NOT-SO-GOOD STUFF
2016-09-27
77%Overall Score
Reader Rating: (0 Votes)
0%