The Last Man on Earth is one of the most creative and daring sitcoms on TV right now, and it really came into its own better than ever during its second season. Despite middling ratings, the show seems to have managed to eke out a third season, and that has now begun with its Season Three premiere, “General Breast Theme with Cobras”, an episode that introduces yet more survivors into the main ensemble, while also piggybacking off of the cliffhanger conclusion to Season Two.

As Season Two’s ending teased, invaders have come to Malibu, and this has the survivors frantically trying to figure out how to defend themselves, as the invaders approach their home. Only Melissa seems to take fast action when the new people finally arrive, shooting and killing one of them, who, unexpectedly, turns out to be played by Jon Hamm! This is a hilarious in-joke that not only recaptures the humour behind the disposable guest star gag, as Will Ferrell’s brief cameo around the start of Season Two did, but also serves as a very amusing reference to Hamm and January Jones starring together as leads and tragic on-screen spouses on AMC’s highly acclaimed Mad Men.

One more awkward funeral later, and the season premiere then shifts to the main storyline, which involves the group deciding whether the new survivors should be able to stay with them. Mark Boone Jr.’s Pat is a character that we already met in Season Two, when he was the first person that Mike encountered after he plummeted back to Earth from space in Season Two’s midseason premiere, but the other survivor, Lewis, is an all-new addition, played by Kenneth Choi.

As you may also recall from Mike’s brief time in the company of Pat during Season Two, Pat is a bit… Off. A clever storyline does arise here though, since most of the group is happy to welcome Lewis, though immediately distrusts and fears Pat. This gets worse when Lewis points out that he thinks Pat may be legitimately insane, and it’s best to eject him from the group as fast as possible. The problem however lies less in the fact of what Pat might do if he’s kicked out, and more in the fact that Phil is the one person who welcomes Pat with open arms, and becomes fast friends with him.

The way that the episode kept viewers guessing about Pat’s mental state was very effective, even as we already know all about what he can be like at his worst, from Season Two’s events. The running gag of Pat being an eccentric jean artist delivered some pretty funny moments, especially when he takes a creepy liking to Gail, and makes her a rather interesting pair of jeans when Phil encourages him to make jeans for the whole group. The moment where Phil and Pat talk about losing someone they liked while blowing up a pier, obliviously not realizing that they’re talking about the same, “Mike” in the process, was also a nice way to foreshadow trouble, even as Phil is just happy to find someone who accepts him, and even thinks of him as a group leader.

The truth is bound to come out though, and eventually, Pat comes out of his HAZMAT suit, just in time to start touching things around the living room of the house, and in the process, he discovers a picture that reveals Mike as Phil’s brother. This makes Pat completely lose it and point a shotgun at the group, though fortunately, he wastes his shells, which allows everyone to try and flee. It’s a bit hard to believe that not even Melissa would attempt to try to disarm Pat, since the survivors clearly outnumber him, and could quickly overwhelm and subdue him with minimal effort, but I suppose that this is a sitcom, so the suspense in disbelief can be forgiven to a point, for want of preserving the humour. 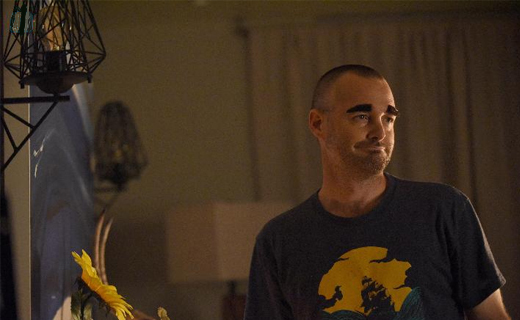 What’s a slightly greater sticking point is that the episode ends rather abruptly. The Last Man on Earth has ended quite a few episodes on these sudden abrupt notes, and sometimes, it works pretty well, like in last year’s stellar midseason finale for Season Two, though in this episode, it feels like the storyline just eventually stops, rather than organically ends. A big moment occurs when Todd floors the group’s vehicle and runs Pat over, likely injuring him horribly if not outright killing him, and the episode quickly ends as Todd repeatedly mutters aloud that he thinks he killed Pat. The direction of the scene could have made it seem like a decent point to end the episode, but the way that the episode just awkwardly cuts off after this big moment, without Todd even slowing down, feels a tad annoying. I suppose it’s a fair enough cliffhanger to get viewers interested in next week’s episode though.

All in all, “General Breast Theme with Cobras” was a strong way to kick off Season Three of The Last Man on Earth, providing a solid way to introduce a new cast member to the survivors in Kenneth Choi’s Lewis, and also nicely building on both Season Two’s ending cliffhanger, as well as the Pat storyline that occurred from Mike meeting him during Season Two’s midseason premiere last Spring. The jokes and storytelling are still perfectly on-point in this season premiere, and even if the episode’s ending is a bit abrupt, even by the standards of this show, the increasing regularity that this group are accidentally killing people makes for both good laughs, and promising story opportunities. I doubt that The Last Man on Earth will ever be too serious about casual murder after the end of the world, but one has to muse about the cutoff point for when this group of survivors becomes a bigger danger than anyone else they could come across.

The Last Man on Earth 3.1: "General Breast Theme with Cobras" Review
The Last Man on Earth starts its third season off strong with an amusing, engaging episode that has the survivors welcoming some surprising new additions.
THE GOOD STUFF
THE NOT-SO-GOOD STUFF
2016-09-26
88%Overall Score
Reader Rating: (1 Vote)
91%