Fear the Walking Dead fortunately picked the ball back up this week, after the frustrating fumble of last week’s disappointing episode. “Date of Death” shifted the story focus back to Travis and Chris, and this resulted in one of the most poignant and effectively emotional storylines in the entire series to date, as the final series of events unfold that seemingly separate Chris from his father permanently with the coming of the Walker apocalypse.

The episode also serves as a pretty solid lead-in to next week’s two-part season finale, with the show occasionally cutting back to Travis in the present, after he manages to find his way back to Madison’s hotel and reunite with both her and Alicia. Predictably, Madison’s frustratingly moronic move from the end of the previous episode, whereupon she turns on the hotel lighting to try to attract Nick back to her, has come back to bite all of the hotel survivors in the ass (and yet still, Madison is blatantly not even punished for it, let alone exiled), when a huge group of Mexican survivors try to get into the hotel.

Travis stumbles in amidst these Mexicans, and Madison making the difficult decision to let him in and continue to force everyone else out was a pretty memorable moment, one that could cause even more bad karma for Madison down the line. The device of Travis recounting the story with Chris, and how he lost Chris, to Madison, was a pretty clever way to justify these cuts back to the present, even if this does involve conveniently sweeping Travis’ foot injury under the rug, which somehow completely healed off-screen, with minimal attention. The show clearly establishes that Travis was with Chris and the frat boys for just over a week though, so I suppose that injury being fixed now, with no complications or infection, is acceptable, if quite lucky for Travis.

The episode didn’t offer much material beyond the main Travis/Chris storyline, but that’s fine, since it effectively amped up one of the best tragic story ideas that Season Two of Fear the Walking Dead has presented at this point. The story also nicely built on Chris shooting the farmer dead, after one of the frat guys, James, also ends up shot through the leg. The leg wound isn’t severe, but it’s enough to make James dead weight, and Travis constantly protesting that the guys have to do a better job of looking after their friend quickly renders him unpopular in the new group, and especially with Chris, who is continuing to irredeemably fall into the convention of the Walker apocalypse. 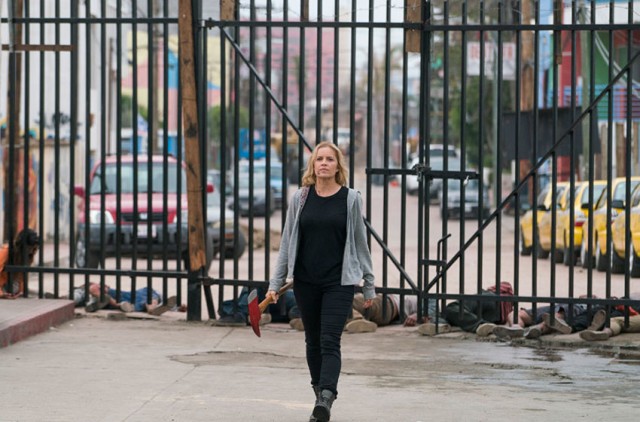 For once, the characters being idiots about their survival in these circumstances also made sense, rather than feeling forced and contrived. The frat guys ignoring Travis’ advice to eat eggs instead of the chickens is actually pretty believable, considering that they’re quite clearly meatheads, and when they inevitably run out of food by eating all of the chickens on the farm, and are forced to think about going somewhere else, James’ injury becomes an even bigger problem. Travis overhears Chris and the other guys talk about killing James to fix the problem, and Travis attempts to cut in, saying that James will fully recover if he just has a bit more rest beyond one week, though the guys are hearing none of it.

The following scene, where Chris exploits his father’s emotional turmoil to subdue him so that the guys can put James down, was also a fantastically powerful moment. Normally, Fear the Walking Dead struggles to earn its emotional gut punches on any reliable basis, but it really did earn this one, and seeing one of the frat boys shoot a pleading James point blank in the head with a shotgun was an exceptionally brutal and shocking moment, one that the show executed uncharacteristically well. This scene also made the following moment, where Travis has to watch Chris leave for San Diego with the other guys, before vainly cursing his son out and stumbling away, all the more dramatic and impactful as well. The show sort of implied that Travis may have hurt or even killed Chris while the story is being recounted to Madison, but in a way, Travis simply fighting hard for his son, and losing him despite never actually forsaking his principles, is indeed the more tragic and satisfying outcome. 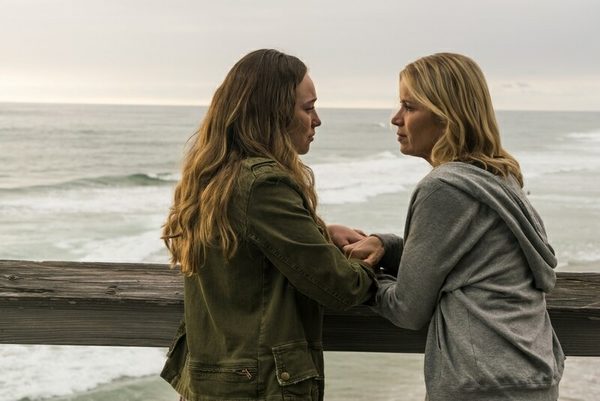 The sole gripe in an otherwise standout episode of Fear the Walking Dead is that the ending somewhat undercuts the great storytelling that came before. Madison confessing to Alicia that her father and Madison’s late husband didn’t die in an accident, but actually killed himself, and Nick, along with Nick’s similarities to her late husband, was the reason she kept this secret, was a decent moment, but it also felt awkwardly crowbarred in. Likewise, the rest of the survivors end up taking in the pleading folks outside, despite them having no way to get in, which feels kind of impractical, and is probably a transparent setup for the events of next week’s two-part season finale. The biggest annoyance however is that Chris leaving Travis ultimately amounts to nothing, since Chris and the surviving two frat boys come into contact with some other people, and shuffle up to the hotel right as the episode ends. Oh come on, seriously? It’s perfectly possible that Chris’ new group saw the hotel lights too, but did they really give up on their San Diego journey that quickly? Moreover, what’s the point of Travis’ failure in losing Chris, if Chris is just going to wind up back in his lap barely a few days later?

Still, there’s no denying that this is a standout episode of Fear the Walking Dead, and one that exceptionally makes up for the show dropping the ball again last week. It’s too bad that the episode couldn’t wrap up on a note as effective as the previous three quarters of it, but the tragic way that the Travis/Chris storyline ended up rounding off was done very well, and this was an episode where the complete lack of Walkers didn’t hurt the story at all, and that’s quite rare for a Fear the Walking Dead episode. If next week’s two-part season finale can cap things off on at least a fairly decent note, Fear the Walking Dead will be in a great position to continue improving in next year’s third season. Maybe this show could yet stand alongside the main Walking Dead series, if it can consistently tighten its storytelling like this.